Nathan Rabin vs. The IMDb Top 250: All About Eve 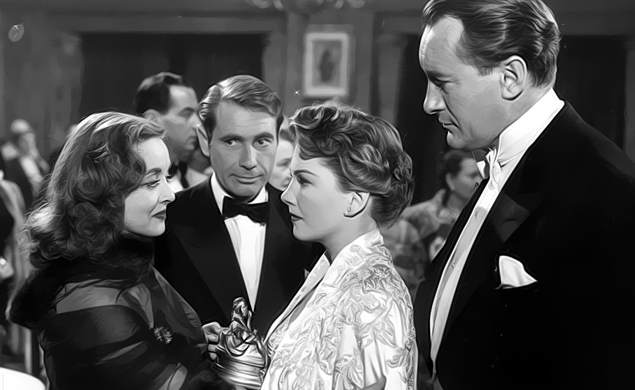 The films we love remain the same, but we are forever changing, and never look at a film the exact same way twice. Just as Network connected with me like never before when I re-watched it for this project, 1950’s All About Eve, the 93rd greatest film of all time according to the users of the IMDb, spoke to a particularly middle-aged strain of professional angst many people in the media (and a goodly percentage of folks outside the media, for that matter), are experiencing now.

All About Eve is the greatest film ever made about what I have taken to calling The Fear, that trembling neuroses that your position in the professional firmament is so fragile that all it would take is the slightest disruption to destroy it entirely. This fear frequently takes the form of a violent mistrust of The New, an irrepressible, destructive force that sometimes comes with a smile and a flurry of compliments, but leaves only destruction in its wake.

In All About Eve, The Fear is felt profoundly by Bette Davis’ Margo Channing, a 40-year-old actress and grand dame of the American stage terrified that age and experience will be her undoing, personally and professionally, and destroy her relationship with her much younger director boyfriend Bill Sampson (Gary Merill). And The New takes the form of the titular Eve Harrington (Anne Baxter), an aspiring actress who arrives in the lives of Channing and her entourage (her director-boyfriend, the playwright who writes her plays and his wife, her maid) as a plucky innocent peddling a hard-luck story about how her pathological hero-worship of Channing gave her the courage to move on after losing a husband in the war.

The people in Channing’s world lost reverence for her ages ago. They see her as a gifted but troubled, and sometimes aggravating, collaborator, not a god or a superstar. Consequently, Channing likes the way she looks reflected in her protege’s admiring eyes: Someone blessed with a magical talent, someone to aspire to. From the beginning, Eve seems to be performing, acting offstage as ferociously as on. When she delivers her story to Margo, it has the feel of an audition she must have aced, because Margo takes her on as her assistant. Soon, Eve has her hero’s messy affairs in order and is making a name for herself for her loyalty and good work all over town.

Written and directed by Joseph Mankiewicz, All About Eve is a supremely cynical and exquisitely mean piece of work, a gift to lovers of venomous one-liners the world over. But re-watching it, I found myself thinking it somehow doesn’t seem cynical enough. It’s hard to believe that the jaded, hard-living show-business survivors of All About Eve wouldn’t see through Eve’s masquerade of dreamy Midwestern innocence more easily—that they, of all people, would want to assume the best of anybody, particularly ambitious young show-business strivers.

But Eve’s ingenue act doesn’t fool everyone. Margo’s straight-talking, wisecracking maid Birdie (Thelma Ritter) sees right through her, and that acid-tongued wit and theater critic Addison Dewitt (George Sanders, at his most triumphantly George Sandersian) suspects the worst of everyone. Consequently he’s just about never wrong, particularly where the phoniness of Eve is concerned.

All About Eve is a film of arch, deliberate excess, an over-the-top melodrama that gives itself permission throughout to be wildly theatrical by centering on an industry where there is no real difference between backstage and onstage, between performing for the public for entertainment and manipulating people’s emotions to professional ends. In its dim view on humanity and vicious cynicism about show business, All About Eve is timeless.

There are many criticisms that can be lobbed at All About Eve: that it’s too in love with the sound of its own wonderfully bitchy, mean-spirited voice (in a not-atypical turn of phrase, a character complains about the “barroom Benzedrine standards of this megalomaniacal society”), that it’s lumpy in its storytelling, and full of melodramatic contrivances and devoid of subtlety and shading. But it could never be said that All About Eve doesn’t try hard enough to be clever, or that it doesn’t succeed. It’s a dazzlingly, even distracting tour de force for Mankiewicz’s malicious wit. Its enduring cultural and emotional resonance comes from its understanding of the bottomless anxiety that comes with aging in a world and business that worships youth, and its keen awareness of the ephemerality of success. If even the Margo Channings of the world can be taken in by ambitious schemers, then we are all vulnerable.

All About Eve’s IMDb ranking: Too high

1. In The Mood For Love
2. Network
3. All About Eve
4. Hotel Rwanda
5. Incendies
6. Pirates Of The Caribbean: The Curse of The Black Pearl
7. Slumdog Millionaire