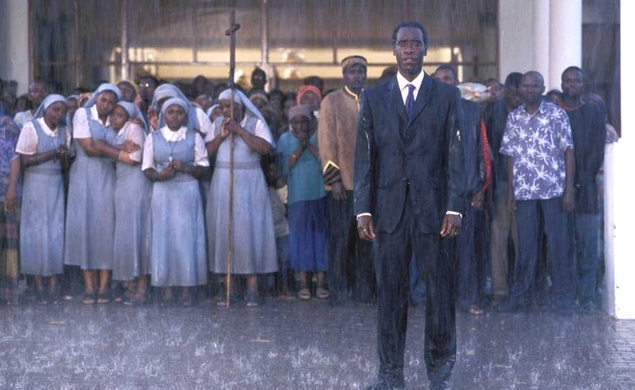 Every year, studios send folks like me and my colleagues in the Chicago Film Critics Association promotional copies of films they’d like considered for year-end awards. And every year I sort through my pile of discs and ponder what I’ll watch first. Am I in the mood for a comedy or a drama? A science-fiction movie or an animated film? Do I want to watch a low-budget independent film or a slick, big-budget prestige movie? Alternately, do I want to watch a film about genocide?

I’m not proud to admit that movies about genocide generally end up in the bottom of the pile, which is why I am only now catching up with 2004’s Hotel Rwanda, despite the film getting rave reviews, garnering three Academy Award nominations for Best Actor (for Don Cheadle), Best Supporting Actress (for Sophie Okonedo), and Original Screenplay (for Terry George and Keir Pearson), and covering an important subject.

Hotel Rwanda doesn’t get off to a bad start as much as an undistinguished one. The direction by Terry George is television-movie flat, and the performances, with the exception of Cheadle as quietly heroic hotelier Paul Rusesabagina and Okonedo as his wife Tatiana, tend to be broad and one-dimensional. It’s the rare film to boast a completely uninteresting Joaquin Phoenix performance, in large part because his American journalist character is on hand largely to serve as an audience surrogate, to ask, largely for the benefit of Western audiences, what the difference is between the Hutu and Tutsi people, groups whose conflict quickly escalates into civil war and then a genocide. The answers Phoenix’s character receives are at once a matter of life and death (the Tutsi are murdered en mass for being Tutsi) and maddeningly cryptic and amorphous, having to do with difficult-to-discern differences in appearance, as well as class, breeding, and background.

In his only affecting moment onscreen, Phoenix’s journalist responds to Rusesabagina’s assertion that once the West sees footage of Tutsis being butchered in the streets with machetes, they’ll have to intervene by answering that they’ll just say, “‘Oh, how terrible,’ and then go back to eating dinner.” It’s easy to imagine audiences having that response to the film’s first hour, which dramatizes its harrowing subject matter with a distinct lack of urgency that dulls its dramatic impact.

Part of this distance is attributable to Rusesabagina’s gift for keeping the realities of the outside world at bay. While children and families are being massacred outside his hotel, inside, people continue to dress to the nines and enjoy cocktails and generally keep up the masquerade that the hotel is still a four-star place of business for the upper-class, and not a refugee camp in disguise. Rusesabagina’s art is the hotelier’s art of getting things done, of keeping up appearances no matter how dire the circumstances. As the film proceeds, that becomes essential, even life-saving, as Rusesabagina manages to save the lives of over a thousand Hutu and Tutsi refugees through the most idealistic kind of pragmatism. He holds off the horrors of the outside world through gifts, bribery, schmoozing, and appealing to the egos, vanity, and greed of the people who would invade his incongruously lush sanctum of polished sophistication were it not run by such a masterful wheeler-dealer.

That premium on appearance begins with his own. Rusesabagina is immaculately put together, always freshly shaved and sharply dressed. Hotel Rwanda begins its journey from arbitrary to heartrending in a devastating scene where Rusesabagina, who has been keeping it together for the sake of his family and business in the face of seemingly insurmountable obstacles, breaks down and starts weeping on the floor as he pulls off his tie. In this moment, all the misery and terror that he has purposefully been holding back—as much for his own benefit as for those who look to him as a rock of stability, kindness, and sanity in an insane world—comes flooding to the surface. Cheadle’s appearance tells the whole story: By the time Rusesabagina is unshaven and wearing casual clothes, it’s clear that even this exemplar of sophistication and civilization can no longer deny the horrors just outside his door.

This marks a turning point where a film that previously felt a little remote and detached becomes intensely emotional and heartbreaking. Hotel Rwanda becomes riveting in its third act, filled with gripping setpieces like one where a truck carrying refugees to the airport is confronted by machete-wielding Hutu forces, and a U.N peacekeeper played by Nick Nolte has to defend his precious human cargo with little more than a gun and nerves of steel.

The comparisons between Schindler’s List and Hotel Rwanda are inescapable. Both center on powerfully pragmatic men who stumble sideways into heroism and end up saving masses from certain death. Hotel Rwanda does not quite measure up to Steven Spielberg’s film, but that is setting the bar awfully high. By the end, Hotel Rwanda merits its place on the IMDb list, not just by being serious and somber, but also utterly compelling.

1. In The Mood For Love
2. Network
3. Hotel Rwanda
4. Incendies
5. Pirates Of The Caribbean: The Curse Of The Black Pearl
6. Slumdog Millionaire