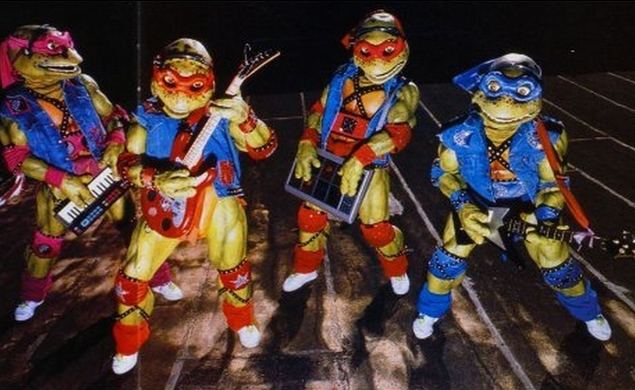 Mutations explores some of the lesser-known variations of familiar characters from movies.

An online uproar erupted a while back when a leaked draft of a potential Teenage Mutant Ninja Turtles screenplay altered the character’s origins so that they became aliens. Fanboys were outraged and the resulting film, which is still in theaters at the end of a lucrative run, references this abandoned alternative origin for the heroes in a half shell as a winking gag. The world was spared the ridiculousness of Ninja Turtles From Outer Space, but like seemingly all popular licensed characters from their era, the Turtles have gone through their fair share of permutations, including a forgotten early 1990s stint as novelty rockers that was captured for posterity on video as the suggestively titled “Coming Out Of Our Shells Tour”:

The video, which not surprisingly was never released on DVD or Blu-Ray but can be found in its entirety on YouTube along with a half-hour making-of, finds the Turtles trading righteous violence for even more righteous guitar licks after their mentor Splinter tells them to “Practice with the same focus that turned you into skilled ninjas” because, in the words of one of the turtles, “You can do more good with music than with any pair of nunchucks.”

The video opens with the unfortunate actors portraying the Turtles telling the audience repeatedly that they love them, because children’s self-esteem is largely dependent on being loved by fictional cartoon characters. The Turtles then perform music, poorly, from a variety of genres including hip-hop and hair metal; half of the fun of the video lies in imagining grizzled songwriters think of ways to insert Turtles-specific lyrics into songs. The video consequently has lines like, “You may not be green and have a cool shell/But you’ll be you and you’ll do it so well!” and “Walk straight/No need to mutate” and songs like “Pizza Power” a nod to their favorite food, and “Cowabunga,” an homage to their favorite word.

In the most enjoyable segment of the video, Turtle arch-nemesis Shredder takes to heckling the children in the audience with some of the effete menace Alan Rickman brings to his villainous roles. Coming Out Of Our Shells re-imagines the Turtles as rockers and Shredder as a sassy, androgynous insult comic doing crowd work with pre-adolescents. Whether he’s hectoring, “This is live entertainment! Get involved!”, asking a small child, “What’s a matter? Couldn’t get a date?” or telling children they better get off their seats because they’re made of velvet, Shredder is having way too much fun.

If any stage show had an excuse to end after 60 minutes, it would be the Coming Out Of Our Shells tour, but it nevertheless runs over 90 minutes, only about 85 of which feel padded and unnecessary. Coming Out Of Our Shells captures one of the strangest and cheesiest of the many mutations this foursome would experience but, to give it some extremely faint praise, it’s still better (and more mature!) than the Michael Bay-produced reboot. True, this conception of the Turtles as kid-friendly rockers did not last, but at least they weren’t from outer space. That would just be stupid.