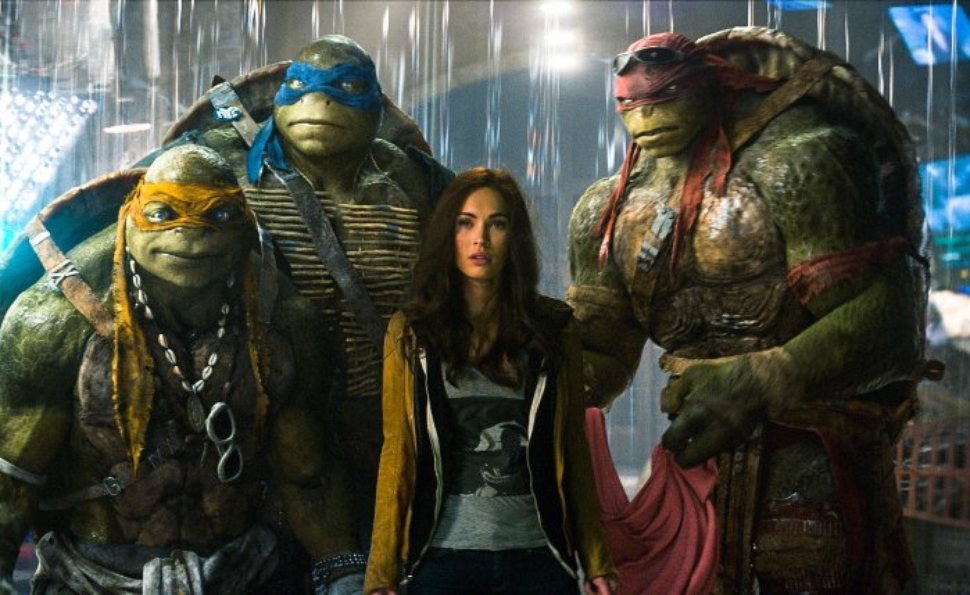 There’s a wonderful moment in the classic Simpsons episode “The Itchy And Scratchy And Poochie Show” where children in a focus group are asked if they want to watch a show where Itchy and Scratchy “deal with real-world problems, like the ones you face everyday,” or prefer the opposite, a show involving “far-out situations involving robots and magic powers?” When the children, being children, prove equally excited about these antithetical ideas for the show, the poor focus-group leader is understandably confused, and left to conclude that these children want a “realistic, down-to-earth show… that’s completely off the wall and swarming with magical robots.”

The astonishingly idiotic latest reboot of the deathless Teenage Mutant Ninja Turtles franchise proceeds along similarly contradictory and self-defeating lines. The filmmakers have apparently decided that the children who are the movie’s target demographic want a gritty, realistic take on the material, with the dour sensibility and world-building concerns of the Christopher Nolan Batman movies. They also apparently want something swarming with magical robot warriors, pizza farts, and gags alluding to the Turtles moonlighting as a novelty rap group.

At the center of the film’s incoherent sensibility lies an understandable confusion about the roles superheroes and comic books play in our culture. Are stories like those of the Teenage Mutant Ninja Turtles important mythologies whose origins need to be respected and treated with stone-faced solemnity, or are they silly comic-book nonsense for dull-witted children, and adults with the interests of dull-witted children? TMNT mostly opts for the first approach, but it also indulges in the odd bit of misplaced levity to let audiences know that it doesn’t take itself too seriously, even though it does. Misplaced solemnity and totally awesome Pizza Hut product placement do not make a comfortable fit, and TMNT’s juxtaposition of the serious and the stupid is never as hilariously incongruous as it should be. It can’t even manage to be the right kind of terrible movie.

The filmmakers’ astonishing miscalculation extends to making this latest re-imagining of the TMNT mythology largely about Megan Fox—or rather, her ability to convey her character’s stubborn determination to break out of the fluff-news ghetto and prove herself as a hard-hitting investigative journalist. Working the beat on giant humanoid turtle-men who love to eat pizza and have awesome ninja skills might do the trick.

Early in the film, Fox’s April O’Neil has to do a story about jumping on a trampoline, which is less a commentary on sexism than a cynical attempt to create a GIF-ready image of Fox jumping on a trampoline with her signature look of tight-lipped dismay. April begins the film looking for that one break that will make her career, and finds it in the story of a mysterious gang of shadowy vigilantes. With no encouragement from boss Bernadette Thompson (Whoopi Goldberg, in a role that’s puzzling both because it’s non-comic, and because someone is casting Whoopi Goldberg in movies in 2014), April doggedly pursues the story and develops a friendship with the creepily realistic-looking turtle-men: wacky party dude Michelangelo (Noel Fischer); Donatello (Jeremy Howard), the smart one with glasses; glowering, humorless asshole Leonardo (Johnny Knoxville); and glowering, humorless asshole Raphael (Alan Ritchson). The film’s questionable commitment to verisimilitude where none is called for involves making the Turtles’ mentor and sensei Splinter (voiced by Tony Shalhoub) look as much like a giant, 6-foot-tall humanoid sewer rat as possible.

The film’s plot finds the Turtles and their human ally facing off against the villainous Foot Clan and its shadowy leader The Shredder—an evil martial artist with a fantastical robot samurai suit that represents a genuine triumph of creative production design—and Shredder’s sneering compatriot Eric Sachs (William Fichtner). But in the grand tradition of contemporary superhero movies, everything in TMNT is unnecessarily connected, and it can all be traced back to April O’Neil. The film has radically expanded her role to the point where it now feels like a movie about a plucky journalist, in a story that tangentially involves strange turtle-men, all without making April any less one-dimensional or boring.

TMNT confuses “dimly lit” for “gritty” and humorless for substantive. It’s afraid of being too fun or too light, and doesn’t seem to know whether it wants to be a Nolan film or a 21 Jump Street-style spoof that turns the ridiculousness of its premise into an inspired feature-length joke. Just about the only actor here who seems to have a steady grasp of what the film’s tone should be—as opposed to what it actually is—is Abby Elliott, who appears as Fox’s vaguely stoned roommate, a space cadet whose response to her roommate’s semi-coherent ravings about the humanoid turtle warriors can be summed up as, “Huh, what?” or alternately, “What, huh?” When faced with this dreary boondoggle, sleepy non-comprehension is the right response.