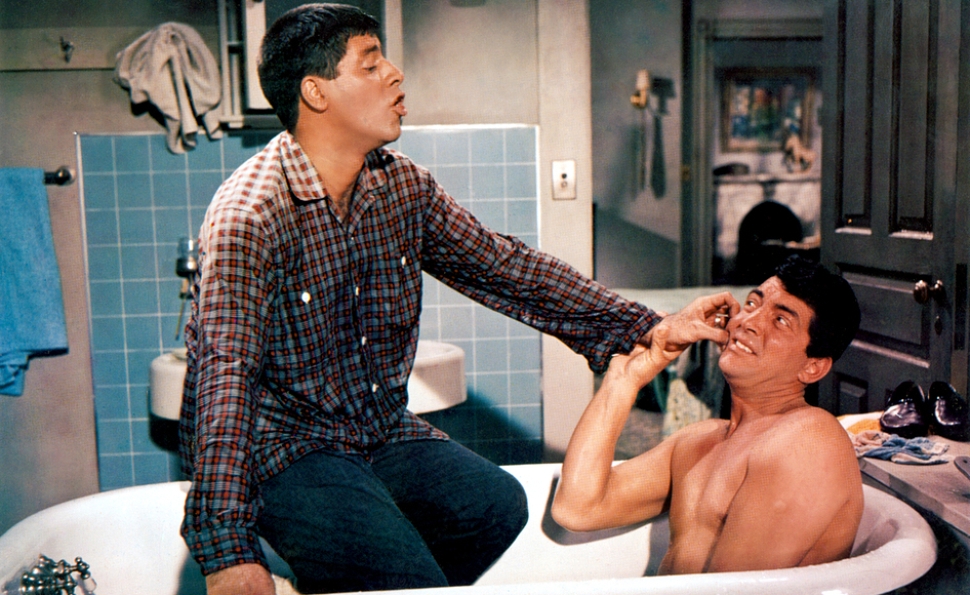 Frank Tashlin learned his craft as part of the “Termite Terrace” brigade of prodigiously talented, energetic young comic geniuses who cranked out Merry Melodies and Looney Tunes cartoons for Warner Bros. These iconoclasts, high on their own creativity,  blessed the world with the likes of Bugs Bunny, Daffy Duck, Foghorn Leghorn, and countless other characters your children can now interact with at Six Flags amusement parks throughout our great land. At Termite Terrace, so named for the ramshackle nature of the building in which the team worked, Tashlin rubbed elbows with Tex Avery, Chuck Jones, Bob Clampett, Robert McKimson, and a slew of others who were revolutionizing animation. Termite Terrace was Tashlin’s graduate school, letting him evolve from making cartoons that felt like movies to making movies that felt like cartoons.

Tashlin honed his craft in the 1940s, but the 1950s were his decade. In a repressed era, Tashlin was an unabashed vulgarian who filled his movies with sexy women and the most lurid, disrespectable parts of pop culture, whether that took the form of rock ’n’ roll (The Girl Can’t Help It), advertising (Will Success Spoil Rock Hunter?), comic books (Artists And Models), or movies (Hollywood Or Bust, Susan Slept Here). For Tashlin, the pairing of artists and models in the 1955 film Artists And Models meant sex just as much as it meant art. Probably more so.

Dean Martin and Jerry Lewis are typecast to perfection as, respectively, Rick, a womanizing painter on a long losing streak, and Eugene, his idiot-manchild best friend and roommate. Rick and Eugene are longtime friends whose partnership goes back to their days in a Boy Scouts-like youth group, but in their early scenes in particular Tashlin depicts Eugene fulfilling the roles traditionally played by wives in 1950s relationships—cooking, cleaning, and looking after a partner. At other times Rick comes off more as a father figure to Eugene’s demented child. 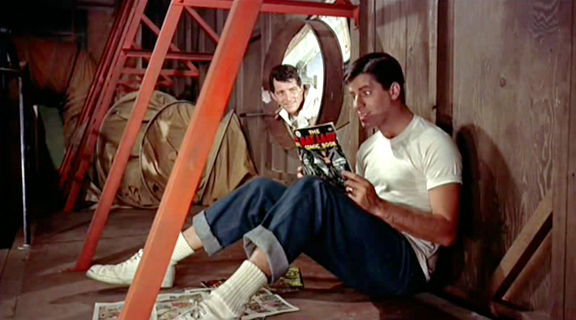 As the film opens, Rick and Eugene are just barely getting by. Eugene squanders what little potential he has by immersing himself in the world of comics, most notably one featuring a figure of lust known as Bat-Lady. The Frederic Wertham-prompted, Estes Kefauver-led comic-book hysteria of the 1950s, which Artists And Models comments upon irreverently, suggested that the medium’s violence and depravity affected children on an almost subliminal level. These scaremongers were convinced that the bloodshed, sex, and murder children experienced in the latest issue of Tales From The Crypt would haunt their nightmares and coarsen their souls. In the case of Eugene, at least, they were right. Eugene’s seedy immersion in the world of comic books literally gives him nightmares. Thankfully, he also talks in his sleep, enough to give his roommate the basis for the next great comics character: Vincent The Vulture.

Artists And Models was released at a time when comics were viewed with suspicion as a corrupter of children. Part of Artists And Models’ genius is that it taps into and exploits this pervasive fear that violent entertainment will breed real-life violence, especially where children are concerned—but it sends it up at the same time. That was part of Tashlin’s gift: His satires would feel sour and smug if their creator didn’t have such a genuine appreciation for low culture and cheap kicks.

As Rick and Eugene’s collective fortune rises, they become involved with artist Abby (Dorothy Malone) and her model Bessie (Shirley MacLaine). Bessie serves as the model for Eugene’s beloved Bat-Lady, though of course he’s too dense to figure that out himself, and he ignores the never-ending trail of hints she drops. MacLaine isn’t as manic or nasal as Lewis: No one is. Yet she accomplishes the tricky feat of being both an appropriate love interest for a man with the psyche of a 12-year-old, and adorably sexy. She’s gloriously awkward in her attempts to seduce Eugene, and she handles the physical comedy with a wonderful dearth of self-consciousness that almost, but never quite, hides her beauty. Through charisma alone, MacLaine makes the prospect of a gawky, geeky female Jerry Lewis not just palatable, but irresistible. 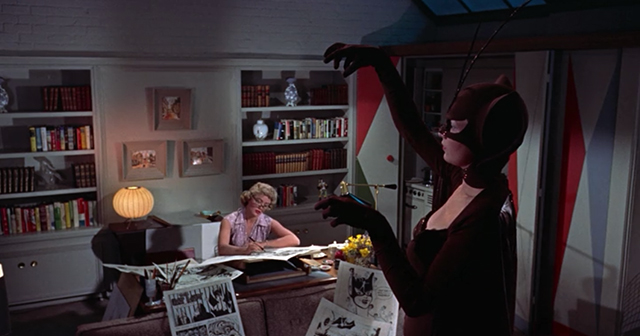 Clearly the work of a former animator, Artists And Models isn’t subject to the usual laws of live-action films. Every time Eugene gets aroused, his body heats up, to the point where at one point, a nearby water cooler starts bubbling in an erotic frenzy. When Eugene gets a chiropractic rub-down, his legs stretch up to his head like he’s some sort of human Stretch Armstrong doll. It’s easy to imagine a lot of the film’s live-action gags working in a cartoon, as when the down-on-his luck Eugene daintily places a single bean on a plate as if it were the juiciest porterhouse in existence, and makes an elaborate show of savoring this barest of morsels, all in an attempt to make Rick feel less terrible about their poverty.

In its third act, Artists And Models takes a dramatic turn when it’s discovered that Eugene’s dreams  contain nuclear secrets, and consequently, so do the comic books Rick draws based on them. For a film that already takes satirical aim at comic-book hysteria, capitalism, and the war of the sexes, throwing in the Cold War is an audacious move, but one that perfectly suits it. The film’s third-act turn wouldn’t feel out of place in comic books, where crazy things just happen, and the fate of humanity can come down to a pair of comic-book-obsessed goofs.

A sense of joy animates Artists And Models, coming through most potently via production numbers where Rick and Eugene leer and ogle their way through ditties while surrounded by a bevy of beauties. Watching Lewis and Martin breeze their way through Artists And Models, it’s easy to forget how tortured their personal and professional relationship was, or that this would be their last year of filmmaking together. (Tashlin also directed their final collaboration the following year, the equally terrific, even more meta Hollywood Or Bust.) But Artists And Models is above all a tribute to the childlike faith in make-believe that lets Eugene survive his life of penury, as embodied by the number “When You Pretend.” For close to two giddy, goofy hours, Artists And Models makes it all too easy to believe that these two complicated, difficult men whose union would soon end—permanently and bitterly—were the best of buddies, goofing and charming their way through a comic-book world where danger was everywhere, but nothing could ever really hurt them.

Over in the Forum, Scott Tobias and Tasha Robinson continue the conversation by disagreeing on the mugging humor of Jerry Lewis, but they find common ground in the film’s musical numbers and buddy-comedy routines. And on Thursday, Noel Murray offers up a look at Frank Tashlin’s years as an animator, with visual gags aplenty.