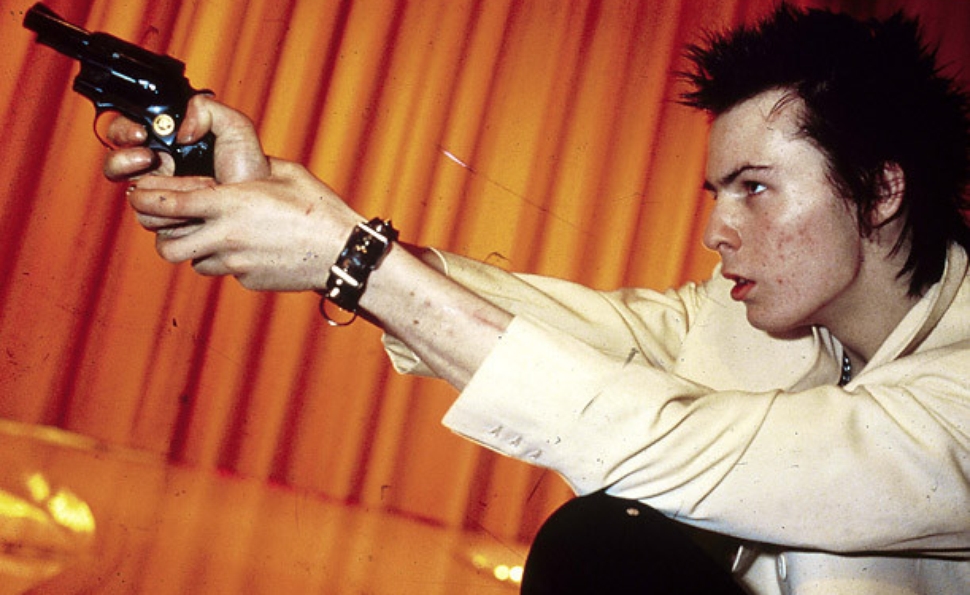 The Sex Pistols movie The Great Rock ’N’ Roll Swindle was released in 1980, two years after shooting began, and not long after the band split acrimoniously. In that same year, The Clash recorded and released its triple-album Sandinista!, on the heels of making what’s widely acknowledged as one of the best rock albums of all time, London Calling. In The Great Rock ‘N’ Roll Swindle, punk rock is depicted as a sham, a marketing gimmick… a way to sow chaos for fun and profit. One way the movie mocks its own heroes is to have a band play a handful of Sex Pistols songs as disco, to symbolize the ultimate degradation of a musical form that used to be rude and radical. Yet with Sandinista!, The Clash tried out disco, hip-hop, dub, kiddie-pop, and a smattering of other non-punk genres—all mostly without irony. The Clash rejected the Pistols’ nihilism, finding fertile musical ground in the remnants of a broken scene.

The Sex Pistols were a fascinating experiment in self-immolation: a group so defined by an anti-establishment stance that it had no choice but to break up once it became successful. What keeps The Great Rock ‘N’ Roll Swindle from being completely unwatchable is how well it illustrates—intentionally or not—the contradiction of a band at war with itself. Director Julien Temple went on to become one of the British punk era’s most sympathetic chroniclers, but he came late to the Pistols movie project, stepping in after an abortive effort by American sex-pic maestro Russ Meyer and writer Roger Ebert to make a film called Who Killed Bambi? Temple’s movie is something of a salvage job, taking footage shot during the band’s short, stormy rise to the top, and adding a layer of puckish postmortem, while using some of the Who Killed Bambi? ideas about the corruption of youth. The most controversial part of The Great Rock ’N’ Roll Swindle is the suggestion (partly but not entirely facetious) that the Sex Pistols were wholly the invention of manager Malcolm McLaren, who both stars in and narrates most of the picture, making himself look like some kind of counterculture business guru.

As if to prove McLaren’s point, Temple devotes about a third of The Great Rock ’N’ Roll Swindle to what happened to the Sex Pistols after frontman Johnny Rotten quit. In 1978, after a string of hit singles and headline-making stunts in the U.K., the Sex Pistols toured America, facing confrontational crowds while dealing with the increasingly erratic behavior of junkie bassist Sid Vicious. After a gig in San Francisco, Rotten (born John Lydon) threw up his hands and left to form a new band, Public Image Limited. McLaren tried to soldier on without him, using Vicious as a lead singer—a scheme that got scotched when Vicious was jailed for murdering his girlfriend Nancy Spungen, and then died from a heroin overdose—and auditioning other vocalists, to sing calculatedly provocative and/or trashy songs. That latter-day Sex Pistols music is terrible, but it constitutes a lot of what The Great Rock ’N’ Roll Swindle puts forward as “the Sex Pistols,” which only bolsters McLaren’s argument that he got rich peddling shit.

For the most part, punk in the U.K. had differing origins and aims from punk in America. If “Band Zero” for American punk was the Ramones—which for many fans they were, no matter how many primitive rockers preceded them—then the Ramones’ movie Rock ’N’ Roll High School is one of the most important expressions of punk’s spirit and ideals on this side of the Atlantic. The Ramones emerged from an artier New York scene which framed their music as a celebration and reinvention of junk culture, like a version of Andy Warhol’s soup cans that people could dance to. That’s partly why Rock ’N’ Roll High School is so joyously dumb: It’s unashamedly in the tradition of the Sam Katzman rocksploitation movies of the 1950s and 1960s. The American punk-rock movies that followed over the next half-decade also tended toward the trashy, borrowing from Hollywood melodramas to tell stories about mixed-up characters trying to find a little freedom to be themselves.

Like the Ramones, the Sex Pistols were greeted as U.K. punk’s Band Zero, and drew on an underclass rage that seeps into The Great Rock ’N’ Roll Swindle whether McLaren wants it to or not. On Shout! Factory’s DVD edition of the film, Temple explains how he was first attracted to the Pistols because they were describing the reality of life in 1970s England better than any pop group since The Kinks. When Rotten sings “no future for you” in “God Save The Queen,” he’s explaining what it’s like to be funneled through an educational system that picks winners and losers based on the students’ home addresses. It would’ve been disingenuous for The Great Rock ’N’ Roll Swindle to be goofy or aspirational in the way Rock ’N’ Roll High School is, because that wasn’t in keeping with either the Sex Pistols’ aesthetic or their personal experiences.

At the same time, though, Temple also says on the DVD that he saw the punk scene in London at the time as the champions of a romantic British ideal that had been all but forgotten. According to Temple, the punks knew the secret London: the streets and neighborhoods that proper society left alone, where scrappy folks could live as a hedonistic collective, sharing the gnostic gospel of England.

Some of this vision is evident in Derek Jarman’s offbeat 1978 punk film Jubilee, in which Queen Elizabeth I time-travels to 1970s London and finds a post-apocalyptic hellscape, ruled by the rowdy, plugged-in youth. And a lot of Temple’s idea of punk romanticism is evident in The Clash: the great “yes” to the Sex Pistols’ braying “no.” Every time The Great Rock ’N’ Roll Swindle scoffs at punk as a massive hype-job, the pessimism is answered in kind by London Calling and Sandinista!, which largely fulfill the music’s promise to strip rock back down to its essence and then rebuild, with less aristocratic pretension and more cross-cultural inclusiveness. Much of the history of British pop is divided into rivalries, real or imagined: like The Beatles vs. The Rolling Stones, or Blur vs. Oasis. In the battle of The Clash vs. the Sex Pistols, circa 1980, The Clash were the clear winners. The Sex Pistols stumbled to a finish after a dispiriting decline, while The Clash were making some of the most vital, inventive music of the era.

But then, that’s part of what’s so interesting about The Great Rock ’N’ Roll Swindle: how often it exposes its own lie. Over and over, McLaren says he strategically positioned Sex Pistols as a hot item by not recording and not playing gigs, so the public wouldn’t figure out that they were talentless. Leaving aside how much McLaren fudges facts (much of the band’s inactivity was more due to skittish record labels and club-owners), every time Temple cuts to the real, Rotten-led Pistols, the performances are so incendiary that it undercuts McLaren’s smug assertions that the band couldn’t play. It’s true the Pistols weren’t virtuosos. But they could do Sex Pistols songs better than anyone on the planet.

Temple realized this, surely. He later made the documentary The Filth And The Fury, which retold the Sex Pistols’ story from the band’s point of view. But honestly, the Pistols get their due in The Great Rock ’N’ Roll Swindle, too, from those willing to read between the lines. In its best performance footage, the film thrums with the electric force of the band’s generation-defining negativity.

So maybe it’s wholly on-point for the first official Sex Pistols movie to piss on the band’s legacy. Even Shout! Factory’s DVD shifts between its dual layers and pauses briefly right in the middle of Johnny Rotten’s famous line, “Ever get the feeling you’ve been cheated?,” as though denying Rotten one of his most quotable moments. Maybe nothing regarding the Sex Pistols should be preserved or canonized. After all, down was always up with this band. They were Bizarro Superman. They were Oscar The Grouch. They were a nest of serpents, swallowing their own tales.