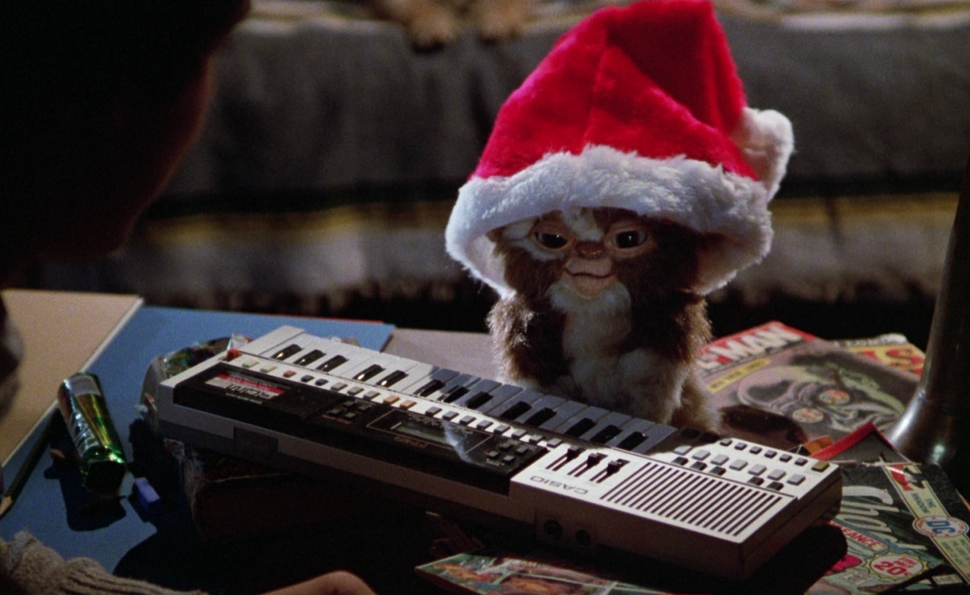 To appreciate Gremlins, Joe Dante’s 1984 horror-comedy, it helps to appreciate It’s A Wonderful Life—both the film itself, and the place it used to occupy in American life via television. Directed by Frank Capra and starring James Stewart and Donna Reed, It’s A Wonderful Life lost money on its first release, despite earning some glowing reviews (and a few not-so-glowing ones) and a handful of Oscar nominations. After its initial release, it didn’t exactly vanish, but it only became an established Christmas classic when copyright issues made it easily available to TV stations large and small, beginning in the 1970s.

During the holiday season, It’s A Wonderful Life would end on one channel, then begin on another, broadcasting its vision of the idyllic, small-town American community of Bedford Falls and its vice-ridden remix, Pottersville, the same town drained of its community spirit by unchecked greed. Thanks to the carelessness of UHF stations, which often trimmed the 130-minute film to fit a two-hour block, it was even possible never to see the same version of the movie twice. But the essentials always remained the same: The kindhearted, tortured George Bailey (Stewart) always prevailed over the corrupting influence of greedy banker Mr. Potter (Lionel Barrymore). And it all took place against the backdrop of beautiful, fake Bedford Falls, a backlot vision of America that looked like a collective wish for what the country ought to be.

Set during Christmas, Gremlins nods to It’s A Wonderful Life’s ubiquity in one scene. It’s playing on the kitchen TV as Lynn (Frances Lee McCain), mother of protagonist Billy (Zach Galligan), cooks and cries. (There’s also a joke about the film in Home Alone, directed by Gremlins screenwriter Chris Columbus.) But even without that moment, It’s A Wonderful Life’s influence is all over Gremlins. Bedford Falls becomes Kingston Falls, and like its predecessor, it’s a place where residents stroll through downtown and lives entwine across generations. Everyone’s parents got engaged at Dorry’s Tavern, and everyone does their banking at the same picturesque downtown location. As in Bedford Falls, snow drifts through Kingston Falls like the particles in a gently shaken snow globe. (It’s A Wonderful Life earned its sole Oscar for its snow effects.) Kingston Falls looks like the quintessential American small town, and in a sense it is: Dante shot the film on a Universal Studios backlot that’s doubled as small-town America since at least 1949, including in Inherit The Wind, To Kill A Mockingbird, The Music Man, and Weird Science. The same lot served the same purpose in the Back To The Future films, and it remains in use today. Close your eyes, picture a pretty little town, and some elements of that backlot will surely sneak into the mix. 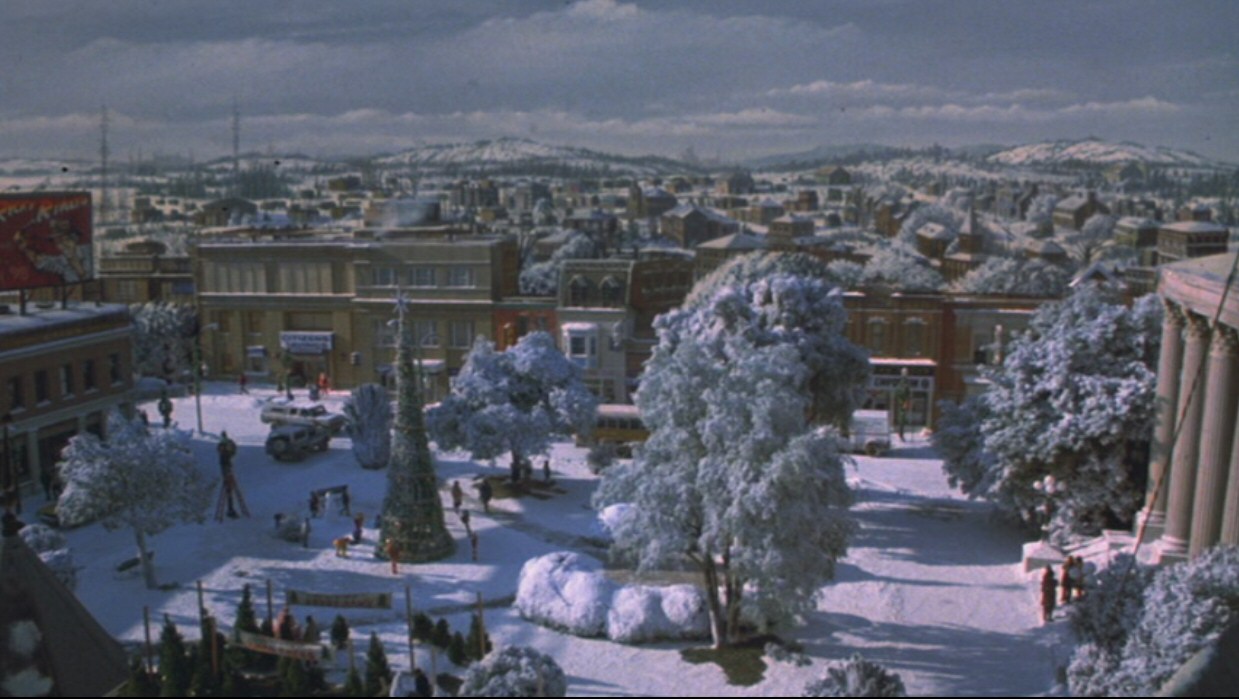 All is not well in Kingston Falls even before the titular gremlins arrive, however, just as it wasn’t well in small towns across the country in the early 1980s. Hard times have struck some of its residents, one of whom is seen pleading with wealthy miser Mrs. Deagle (played by Polly Holliday as a cross between Mr. Potter, Ebeneezer Scrooge, and The Wizard Of Oz’s Almira Gulch) for financial relief. Deagle, who names her cats after forms of currency, doesn’t care. She even wants to shut down Dorry’s, where Billy’s crush and bank co-worker Kate (Phoebe Cates) works shifts without pay to help keep it open. Murray Futterman (Dick Miller) drinks there a lot since he lost his job. For as much as Kingston Falls shares with Bedford Falls, it also resembles the troubled, emptying, progress-devastated place described in Bruce Springsteen’s “My Hometown,” released that same year. It’s well on its way to becoming Pottersville. The prominently featured Burger King could be product placement, or a symptom of encroaching homogenization. (Maybe both.) It’s A Wonderful Life showed an America that, through the fortitude of good people, would always bounce back to its best self. Gremlins holds out no such hope.

The references don’t end with It’s A Wonderful Life, however. Kingston Falls is made partly out of glum, real-world concerns, and partly out of other movies. An aspiring cartoonist, Billy gets some admiring words early on from a barfly played by animator Chuck Jones. In addition to It’s A Wonderful Life, Kingston Falls’ TVs play Invasion Of The Body Snatchers and the Clark Gable racing movie To Please A Lady, both of which play significant roles in the plot. In the high-school classroom where Billy takes one of the mogwai, the gremlins’ cute, pre-feeding-after-midnight form, for closer inspection, the teacher plays “Hemo The Magnificent,” a 1957 instructional short directed by no less than Frank Capra. That’s to say nothing of the many Easter eggs scattered throughout the film, from an apparently functional version of the time machine from the 1960 version of The Time Machine to Forbidden Planet’s Robbie The Robot. 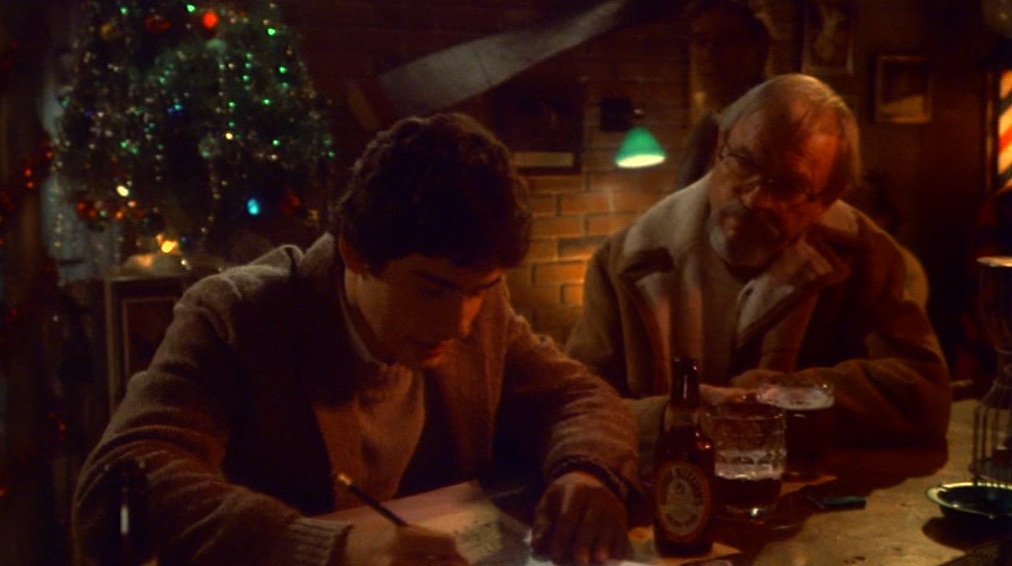 Gremlins has many influences, and many creators. Steven Spielberg stepped in as executive producer after falling in love with Columbus’ script. The final film features the same basic bones as an early Columbus draft, but goes to fewer overtly dark places than Columbus’ version, which included the death of Billy’s mother and dog, a McDonald’s full of half-eaten customers (their food still untouched), and no Gizmo, the good mogwai who remains by Billy’s side throughout the film. (In this version, all mogwai go from cute to murderous, fed after midnight or not.) People responsible for revisions along the way include the hard-working, oft-uncredited script doctor Tom Mankiewicz.

But Dante’s sensibility prevails. However strong his connection to Frank Capra, Dante has an even stronger affinity with classic Warner Bros. animation. (Years later, he even directed the worth-a-second-look Looney Tunes: Back In Action, but prior to that, he essentially turned Gremlins 2: The New Batch into a feature-length Looney Tunes homage.) In Gremlins, he takes out his frustrations by unleashing cartoon hell on Kingston Falls, and with it, all the potential for satire and mayhem made possible by bringing living cartoons into the real world. Once hatched, the evil gremlins at first just want to kill: In the film’s scariest scene, they terrorize Lynn to the accompaniment of Johnny Mathis’ version of “Do You Hear What I Hear?” They quickly pick up human habits, however, whether singing Christmas carols, smoking, drinking, picking their noses, performing a borderline-obscene parody of Flashdance, or brooding alone in a bar. It’s a vision of humanity at its most grotesque, selfish, and destructive. Pottersville looks tame by comparison.

Dante’s cartoon has teeth, however—literal and otherwise. The gremlins feel like real threats from the start, and when Lynn and Billy fight the gremlins, putting one in a blender and another in a microwave, they explode into disgusting-looking green goo. (The film’s content is one reason we now have the PG-13 rating today.) The film finds a lot of dark humor in watching the gremlins terrorize the town, but the film’s darkest joke is this: They aren’t instigators so much as catalysts. They accelerate the destruction of Kingston Falls that Deagle and her greedy likes had already set in motion. 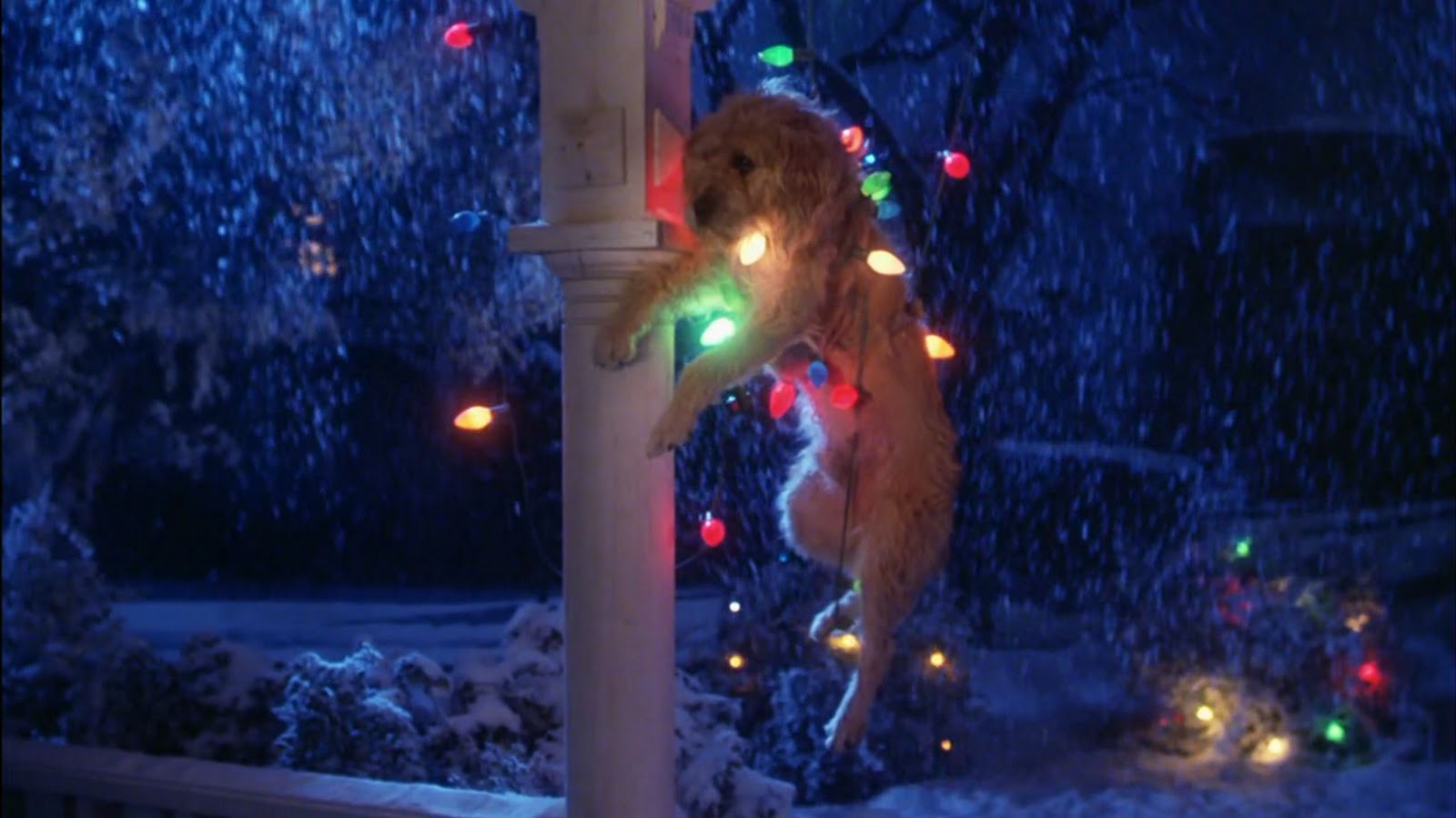 Yet in spite of all this, Gremlins finds a happy ending, and before that, a strangely beautiful moment. Gathered in a movie theater, the gremlins watch hypnotized as a scene from Snow White And The Seven Dwarfs plays. Even they can’t help but be entranced by it, singing along with the dwarves’ happy working song, and for just a moment, finding something to do beyond destroying the world around them. Maybe, the film suggests, the movies can make us better. Yet, at the same time, Snow White seals the gremlins’ doom. Except for one, who escapes to cause more trouble, the movie-distracted gremlins go up in flames when Billy, Gizmo, and Kate blow up the theater.

So which is it? Do movies—some movies, anyway—unite us and give us visions of a better world? Or do they distract us while the world we have gets blown up? Does It’s A Wonderful Life make us want to be George Bailey, turning our hometowns into Bedford Falls? Or does it merely reassure us that we’re fine, echoing our best images of ourselves back to us in one rerun after another, while Pottersville creeps in? Gremlins not only doesn’t answer those questions, it shows no interest in attempting to answer them. Dante gets to have it both ways, portraying a version of the American ideal on the verge of falling apart, then reveling in the destruction of the creatures he sets loose to finish the job. As chaos overtakes Bedford Falls’ 1980s descendent, it’s simultaneously thrilling, funny, and more than a little disturbing to see the American dream destroyed, reflected in a funhouse mirror that displays our worst impulses. It’s a wonderful life, sure, but there’s no guarantee it’s going to stay that way.

The Gremlins discussion continues in the Forum, where Scott and Nathan dig into the film’s xenophobia, Joe Dante’s not-so-disguised sympathy for its rampaging id-monsters, and the conflicting warmth and horrors of Kingston Falls. And on Thursday, Chris Klimek surveys the PG-13 rating 30 years after Gremlins helped bring it into being.