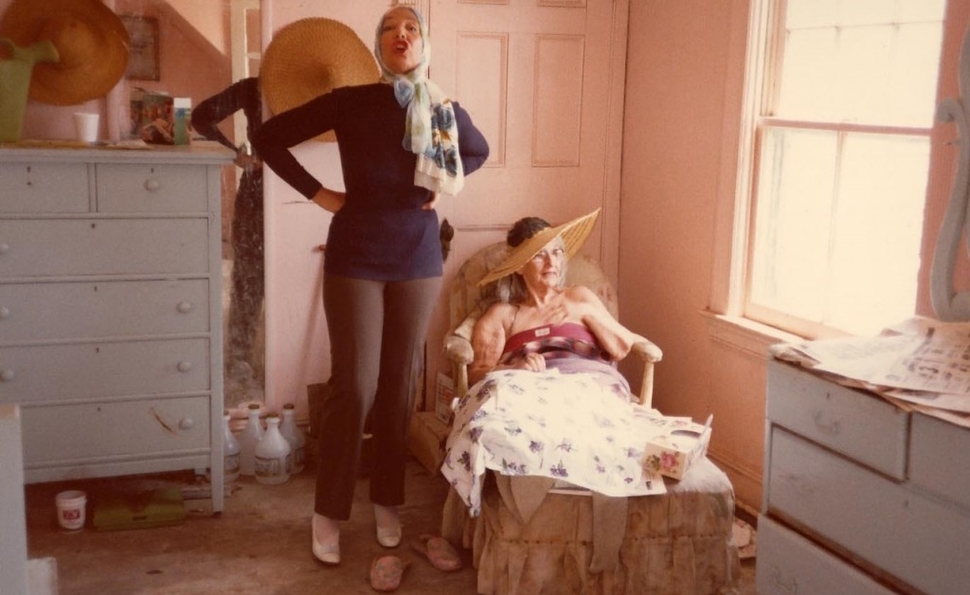 The captivating monotony of Grey Gardens

by Keith Phipps and Tasha Robinson

Tasha: I’ve always found Grey Gardens dizzying, because it’s simultaneously so tedious and so amazing. The vast bulk of it is Little Edie either monotonously talking to the camera or bickering in circles with her mother, and there’s almost no hint of progression, shape, or story. It’s easy to tune out a bit, like I would if I were related to the Beales, and used to hearing them endlessly rehashing all these old conflicts at every holiday dinner or family get-together. At the same time, the film is fantastically dense and revealing. I’m fairly convinced neither of the Edies realized during filming how much of themselves they were exposing. That alone raises some discussion-worthy issues about voyeurism—especially since the the Edies, living in what seems like desperate poverty, were reportedly each paid a few thousand dollars to let the Maysles brothers into their lives. But what sticks with me more than the ethical issues is the way nearly every scene of the film bares some painfully revealing tidbit about the Edies’ past or present problems: their low standard of living, their loneliness, their codependence, their inability to let go of past hurts. I could cite a dozen casually tossed-off moments that could be unpacked at length for what they reveal, like Big Edie reacting to the cat using the corner of her room as a litterbox—“I’m glad somebody’s doing something they want to do.”—or mercilessly driving her daughter out of the room by belittling her singing, then muttering, just to the camera, that of the two of them, Little Edie actually has the better voice. What most endures for you about the film?

Keith: That cat. Always that cat. Just the casual recognition of, “Well, there it goes again,” followed by that passive-aggressive quote you cite. It’s kind of the film in miniature. Looked at not in miniature, however, it’s the world of Grey Gardens itself that sticks with me. And it is a world: The Beales have created a place removed from the way the rest of society functions, where they live together literally among the ruins of the past. If Grey Gardens were a narrative feature, the production design would seem almost too stylized, one step away from Miss Havisham living with all those clocks. The reality of it makes it haunting in a way a fictional version could never be.

But let’s raise the question everyone has to grapple with watching this film: Should we be watching it in the first place? Is Grey Gardens an act of voyeurism, taking advantage of those who don’t know any better than to let the cameras in?

Tasha: It’s a hard call. It feels exploitative because the Edies’ behavior makes empathetic people uncomfortable. You and I wouldn’t want to be caught on camera warbling endless songs in a thready, off-key voice and boasting obliviously about our fantastic talent, or putting down bags of dog biscuits for the raccoons infesting our attics. So clearly, because the Maysles caught these embarrassing things on film, they’re taking advantage. Except that the Edies didn’t feel that way—Big Edie reportedly saw the film and approved it before her death, and Little Edie famously wrote a proud response to Walter Goodman’s scathing New York Times review of the film, debunking the idea: “All this talk about the film exploiting us. We didn’t exploit David and Albert and they didn’t exploit us. Two highly talented people met up with two highly talented ladies and collaborated on a new kind of motion picture.” Okay, goes the argument, so the Edies did all these embarrassing things on camera and for some reason they weren’t embarrassed? Doesn’t that—and their behavior, with its overtones of delusion, schizophrenia, and hoarding—imply that they’re mentally ill, and not fit to consent to their own appearance in the film? The Maysles brothers have been hit with that argument a lot, and they’ve argued it’s patronizing, though their arguments aren’t always persuasive, or even entirely coherent. (And they’re necessarily self-serving.) How do you feel about forwarding an exploitation argument when everyone on both sides of the camera says they’re fine with the final product? 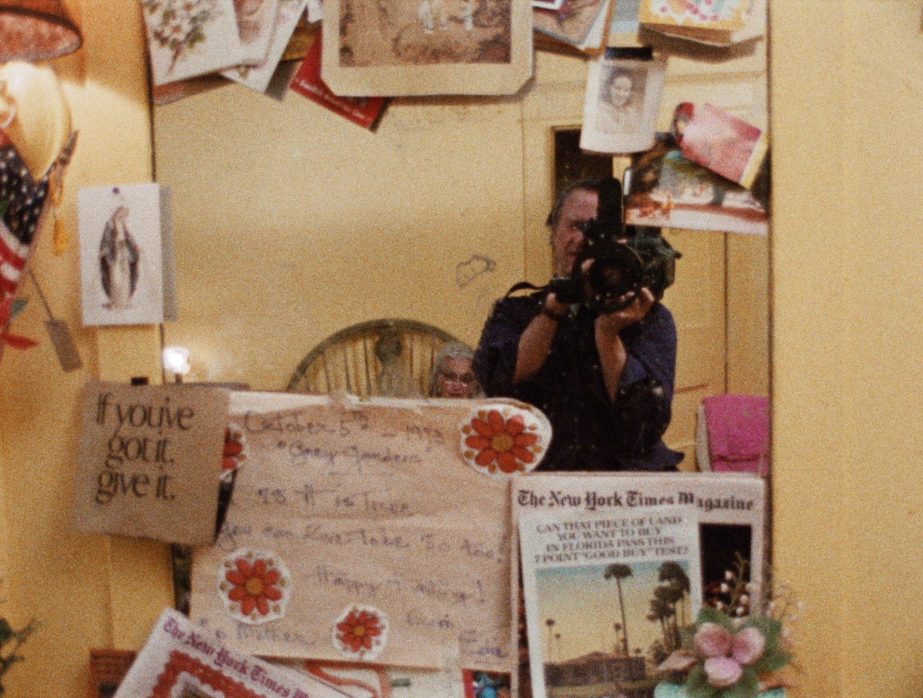 Keith: This is a case where I like the film so much, and the glimpse it gives into these lives I would never otherwise have seen, that I want to give it a pass even while I feel like my better angels are telling me not to give it a pass. Nonetheless, it’s a film I’ve seen and enjoyed several times over the years, and not, at least I think not, because I enjoy mocking the Beales. They’re complex characters in a knotty relationship and the Maysles capture that beautifully. Then again, I laugh. And it’s not like I’m laughing with them. What I’m saying: I have a pretty complicated relationship with this movie, but then I think that’s also part of the beauty of the movie. There’s no simple way to view it or to regard its characters.

Tasha: It’s incredibly discomfiting viewing, because it’s so intimate in its relationships between the Edies, and between them and the people around them, and between them and the Maysles. I feel like an intruder, especially toward the midway point of the film, when it starts to feel like Little Edie is blossoming under the Maysles’ attention, and has extended her self-regard to the point of deciding David Maysles is interested in her personally. By the point where she’s started flirting with him, talking about how he’s the only man she needs, the one she’s needed in her life all along, I feel like the wingman on an awkward date, getting mixed signals from the other participants about whether I should leave them alone or hang around for safety. It’s fascinating how careful the Maysles are to not interfere with the story, even when the Edies are trying to draw them in as referees: They gently deflect direct questions with, “What does your mother think?” or, “You would know.” Grey Gardens was hailed as a boundary-breaker for the direct-cinema movement, but direct cinema is supposed to proceed as though the camera isn’t present, and Little Edie and David Maysles seem to have very different ideas about how that should work. Their gentle tussling also makes me wonder if what seems like the clear progression of Edie’s interest in David was created in editing—whether what we’re seeing actually is a chronological progression, or a subtly manufactured narrative.

Keith: Could be. The companion film The Beales Of Grey Gardens might shed some light on the matter, but I’ve avoided it because the original seems kind of perfect to me as it is. Why muddy that? But I think you raise an interesting point by noting that the Beales end up shaping the film in ways the Maysles might not have anticipated. In a way, they’re as much authors of the film as the Maysles, which is also part of what makes the movie so fascinating. That said, it’s kind of hard to make the arguments that the Beales are okay, that the way they live and relate to each other is healthy. For all Little Edie’s post-Grey Gardens life as a style icon, it’s hard to imagine anyone wanting to be her.

Tasha: At the same time, she’s clearly defining, within the film, how she wants to be seen, both by explaining her life and by performing for the camera. Big Edie disparagingly compares her to a little kid at one point, and when Little Edie does her martial dances, or excitedly points out things in her environment, sometimes in a hushed whisper, she does come across like a young child, flattered by grown-up attention and hustling to keep the spotlight on herself. I said it’s revealing in ways she may not intend—her loneliness and desperation come across more clearly than the singing and dancing talents she brags about. But the film is a sustained and deliberate performance for the camera, with Big Edie lurking in the background, undercutting her daughter’s plays for attention—I sometimes think out of humiliation, like any parent watching their kid monopolize a polite, tolerant adult, but sometimes it seems more like jealousy. Big Edie comes across as awfully possessive, both in Little Edie’s description of the timeline between them, and in her unwillingness to watch her daughter show off and gain some independence in the process. While the performative business is authentic in its own way, because of what their need to perform says about them, do you see them as more authentic in this film, caught in the act of living life, or as self-defined characters they’re playing for the camera? 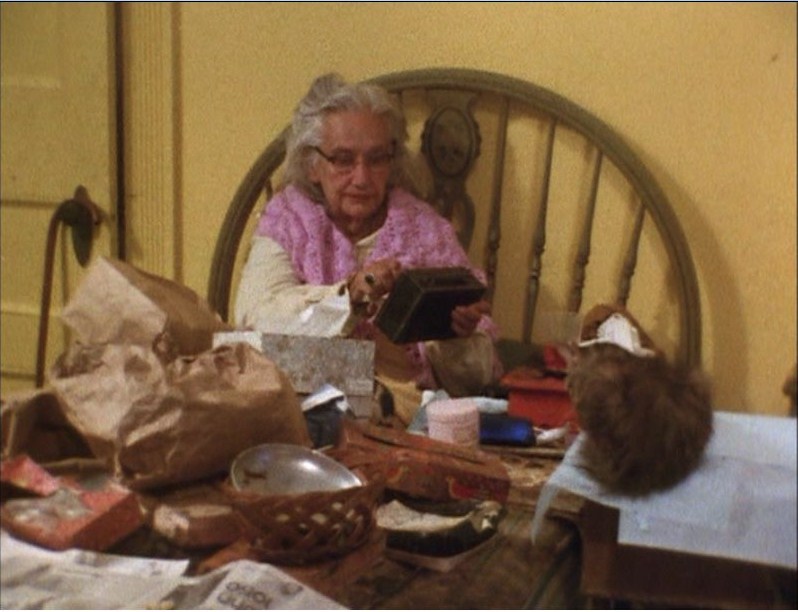 Keith: Maybe it’s a case of becoming who they really are when the camera’s on. My impression has always been that they’re playing out heightened versions of the people they are, and the conflicts in which they engage behind closed doors. But, to state the obvious, we’ll never know, will we? It’s ultimately more fruitful to talk about what we can know: That these women descended from aristocracy into squalor for reasons we’ll never be able to fully understand. That they did so together, one unable to pull the other out from the descent. That others knew and could do nothing. That they could live in their shared madness for so long in part because it was easier to leave them alone. The Maysles found them seemingly starved for attention, and they acted on that hunger when given the chance, perhaps more intensely because cameras were present. And that all this coalesced into a documentary that’s really unlike any other, at once funny and scary, particularly in its suggestion that what’s happened to the Beales could happen to anyone. They had every opportunity, and this is what happened to them. Or am I being too tragic about this movie?

Tasha: I’m not sure they had every opportunity, so much as they’re vain enough to believe they did, and to have invented stories about their own past talent and beauty for themselves and the camera. Little Edie has famously claimed that both Howard Hughes and John F. Kennedy proposed to her, among other things, and Big Edie’s snappish insistence that it’s “perfectly foolish” for her daughter to look different at 50 than she did at 20 is not entirely in tune with reality. I’m also not sure this could happen to anyone; the Beales are such specific, unique characters. Little Edie’s “best costume for the day” alone verifies that. And speaking of her fashion style, Grey Gardens picked up part of its cult status when the gay community embraced it, in part for its camp fashion value, but I suspect also because of the state of the community in the 1970s: For people driven into the closet by persecution and prejudice, the sight of people this boldly and defiantly embracing their identities, no matter what the world thought of them, had to be at least a little empowering. Do you think there’s more to it than that?

Keith: That sounds like enough to me, honestly. And wherever you land on the ethics of the project, it’s hard not to be grateful to get to spend some time with the Beales in all their faded glory. It’s a haunting movie, but also a weirdly inspiring one, and one not easily forgotten. Staunch characters have that quality.

Our Movie Of The Week discussion of Grey Gardens continues tomorrow with Genevieve Koski’s survey of the film’s strange afterlife.