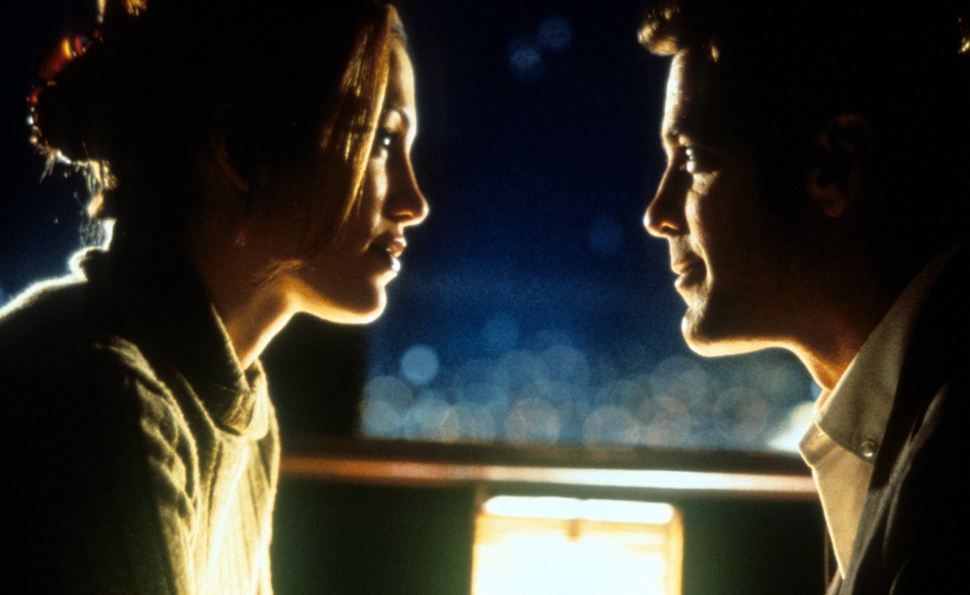 “Why has Hollywood had such trouble doing right by Elmore Leonard?” critic Ty Burr lamented in Entertainment Weekly in 1996, at the top of a piece reviewing six Leonard adaptations. “The man has churned out books for more than 40 years… and none of the many movies adapted from his work have quite captured the books’ slangy, cynical sensibility.” The occasion of the round-up was the home-video release of the 1995 film Get Shorty, which Burr posited as an exception to the rule. Why? Director Barry Sonnenfeld and screenwriter Scott Frank tried to bring the relaxed, “shooting the breeze” atmosphere of Leonard’s novels to the screen with as many of the author’s signature touches intact as they could. They seem to have been the first to recognize that Leonard’s books often made the work easy, providing pages of snappy dialogue that could be lifted virtually verbatim. And, as Burr also points out, however grim the action around it got, the dialogue was funny.

A big-screen Leonard golden age followed. In 1997, Quentin Tarantino adapted Rum Punch as Jackie Brown. Though he made the film unmistakably his own, it’s also just as unmistakably Leonard’s. A longtime fan of the author, whose influence is evident from Reservoir Dogs on, Tarantino fused his own love of colorful characters who live on the edge of violence with Leonard’s love of the same in a film that drew out the strain of compassion and concern with moral codes beneath the surface of both creators’ work. Released the following summer, the Steven Soderbergh-directed Out Of Sight completed a loose trilogy: Both Get Shorty and Out Of Sight were written by Frank and produced by Danny DeVito’s Jersey Films, and the character of Ray Nicolette, as played by Michael Keaton, appears in both Jackie Brown and Out Of Sight. (Sonnenfeld was on board to direct Out Of Sight at one point too, but opted out.)

Out Of Sight is, in many respects, of a piece with its immediate predecessors. It’s true to its source even when it takes liberties with it, often truer because it takes those liberties. Buddy, a redneck in the book, takes the form of Ving Rhames onscreen, but otherwise enjoys the same relationship with protagonist Jack Foley (George Clooney) as he does on the page, serving as a sort of felonious Jiminy Cricket. Jack is a few years younger than in the book, but even in 1998, Clooney had the ability to suggest the cool assurance of an older man. Karen Sisco (Jennifer Lopez) is a blonde in the novel, but Lopez embodies both her confidence and the vulnerability of her unguarded moments. Everyone digs into some of the best dialogue of their career, much of it taken directly from the source. To wit, a meeting between Jack and Buddy and Glenn, Maurice, and White Boy Bob as it unfolds in the novel:

“Nobody calls me Snoop no more or Snoopy, is what White Boy’s trying to say. He’s a little crude, you understand. No, I left that Snoopy shit behind me.”

Buddy said, “What do they call you now?”

“My name, Maurice. Nothing fancy.”

Buddy said, “And you call this bozo White Boy?”

“White Boy Bob,” Glenn said, putting his two cents in, and it sounded innocent enough, though not to Foley. Glenn telling them now, “White Boy used to be a fighter.” Giving Buddy the bait.

Buddy said, “What’s he do now outside of shoot his mouth off?”

Foley said to Maurice, “Like being back in the yard, huh?”

Maurice grinned at him. “Just like it. Nobody backing down. You back down you pussy.”

Watch the equivalent scene in the film and you’ll hear most of the same words, but you’ll also see actors who find the feeling of the moment—the mounting tension, the oneupmanship—with every aspect of their performance.

Even Soderbergh’s filmmaking owes a debt to the rhythms of Leonard’s prose. Leonard portrays Karen’s riposte after she takes down Kenneth, one of Maurice’s henchmen, with these words: “‘You wanted to tussle,’ Karen said, ‘we tussled.’” Soderbergh’s film keeps the line and ends the scene with one of several freeze frames he deploys throughout Out Of Sight. Here, it serves much the same function as the “Karen said,” interruption, pausing the moment to emphasize the competence and authority with which Karen handles the situation. Kenneth didn’t get exactly what he asked for, but he got what was coming to him, and like Leonard, Soderbergh draws out the moment by one delicious beat.

Yet Out Of Sight is as much a film by Steven Soderbergh as any film the director has ever made, thanks in part to the way it bends Leonard’s novel. This was Soderbergh’s first feature after Schizopolis, an experimental film shot at the low ebb of his commercial fortunes. He’d struggled to find his footing after the breakout success of his first feature, Sex, Lies, And Videotape, in 1989, but Schizopolis seemed to have revived him and awakened new possibilities, particularly in his approach to editing. On the film’s audio commentary, Soderbergh and Frank discuss the changes the film underwent on the way from page to screen, but no change was more crucial than the decision to restore a flashback structure that had been removed after Frank’s first draft. 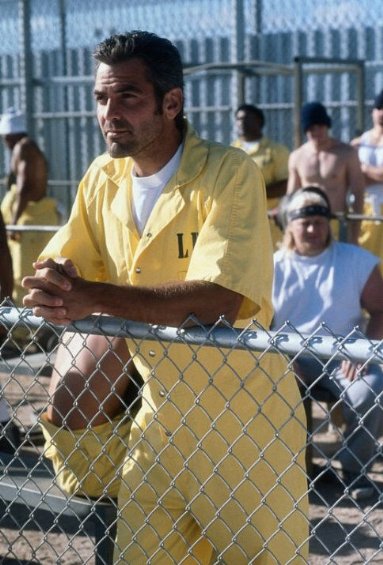 Rather than making a straight march forward chronologically, Out Of Sight occasionally steps away from time, flashing back to Jack’s prison stints and a short-lived attempt to go straight by taking a job offered by the corrupt billionaire he protected in prison, Richard Ripley (Albert Brooks)—a character mentioned but unseen in the book, and one with whom Jack had no connection. By slowly revealing the incidents that put him on his present course—meeting Ripley in prison, walking away from an insulting job offer, returning within seconds to a life of crime—Out Of Sight deepens the character. He’s an unrepentant bank robber who’s walked away from chances to change because that would force him to alter something fundamental about his character; seeing him at different stages in his life reveals both how much the code he lives by matters to him and how unlikely it is he’ll ever change. Karen isn’t given flashbacks, but the film similarly establishes her as a person defined by her job. At the end of the day—or in this case, the end of the film—he’s a crook and she’s a cop, and they’re going to do what their callings force them to do, even at the expense of their own happiness. (Though an epilogue added to the film leaves the door open a crack in a way the novel doesn’t.)

Yet, for a moment or two, the film lets them step outside of that. Out Of Sight’s love scene is a small masterpiece, one in which all the component parts—the performances, the setting, the snow falling outside the window as shot by cinematographer Elliot Davis—work in perfect harmony. But it’s the editing that brings it all together. Working with veteran editor Anne Coates—whose filmography includes Lawrence Of Arabia, Masters Of The Universe, and every sort of movie in between—Soderbergh alternates images of flirtation and consummation. It’s as if passion has removed them from their identities, maybe even from time itself. (Intriguingly, this would have originally provided a contrast to Karen and Jack’s other long scene together in the trunk of a car, which Soderbergh shot as one uninterrupted take, only to abandon the idea when it tried the patience of test audiences.)

Out Of Sight’s editing recalls the late-1960s and early-1970s work of John Boorman, Richard Lester, and Nicolas Roeg, with the lattermost’s famous Don’t Look Now love scene providing a model for Jack and Karen’s lovemaking. Mainstream filmmaking absorbed their innovations at the time, but by 1998, they started to look radical again. A less confident filmmaker might have backed away from such devices. After all, Soderbergh had raw material strong enough to support a more straightforward adaptation. Yet he seems to have realized that the only way to honor the spirit of Leonard’s novel was to shake it up a bit, and to turn it into a movie by letting it do things only movies can. Steve Zahn’s performance as Glenn, for instance, tells a story only hinted at in Leonard’s novel. A car thief and hustler, Glenn gets in over his head when he hooks up with Maurice (a chilling Don Cheadle) and is initiated into the casual violence of a hardened Detroit criminal. Leonard gives readers more of Glenn’s past, but Zahn’s performance makes us spectators to his soul. He sees things he never wanted to see, and in his later scenes, a light has dimmed behind his eyes.

Ultimately, it’s through touches like these that Out Of Sight does right by Leonard, as much as by borrowing his dialogue. Out Of Sight’s characters converse in volleys of repartee, but it’s a combination of elements that makes the film come alive, from the way Soderbergh pays attention to the composition of seemingly mundane shots to the way every role seems as if no other actor could play the part. (Seeing how good Lopez here means wishing she’d made choices that had put her on a different career path.) Hollywood got Leonard right, at least for a little while, by recognizing how much of the work had already been done by his novels, but also by calling on filmmakers who recognized the cinematic possibilities in his spare prose and his unforgettable characters with a habit of making lively conversation. It’s all there on the page, but only for those willing to take it somewhere else.

Tomorrow, our discussion of Out Of Sight continues with a staff forum on the film’s style, its use of its Florida and Detroit locations, and the career of Elmore Leonard. Then on Thursday, Jason Bailey will take a look at Steven Soderbergh’s wilderness years between Sex, Lies, And Videotape and Out Of Sight.