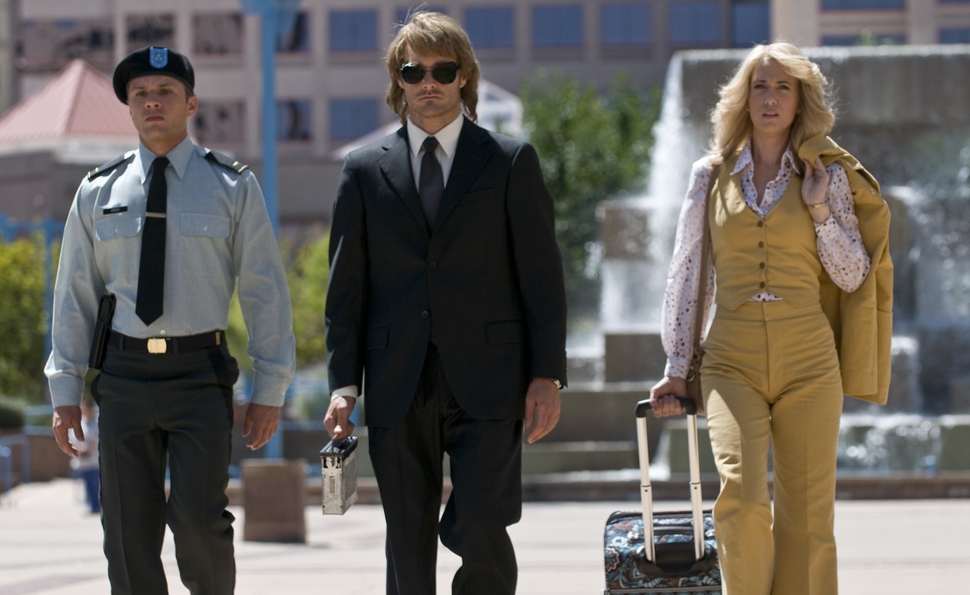 From box-office bomb to cult favorite in the making: Classic MacGruber

According to Box Office Mojo, 129 films played on more than 1,000 screens in the United States in 2010. The lowest-grossing wide release of the year was The Warrior’s Way, a bizarre ninja Western starring Jang Dong-gun, Geoffrey Rush, and Kate Bosworth. The second-lowest was MacGruber, an adaptation of a mildly popular Saturday Night Live sketch parodying the 1980s action series MacGyver. Among the movies that made more than MacGruber: Extraordinary Measures, Jonah Hex, and Furry Vengeance, starring Brendan Fraser as a real-estate developer at war with a raccoon, which holds just an 8 percent rating on Rotten Tomatoes, but more than doubled MacGruber’s domestic gross.

MacGruber fared better with critics—it got a 47 percent on Rotten Tomatoes—and worse with general audiences. In its first three days of release, MacGruber made just $4 million, about $65 million less than the weekend’s biggest movie, Shrek Forever After, and only about $1 million more than the Tina Fey comedy Date Night, which had already been out in theaters for a month and a half. Of the 113 films in domestic theaters that May weekend, 40 films had better per-screen averages than MacGruber, including Princess Kaiulani, Beetle Queen Conquers Tokyo, and the re-releases of The Cremaster Cycle and Fritz Lang’s Metropolis. MacGruber lingered in the theaters for just two more weeks, and ended its pitiful 21-day run with $9.3 million in worldwide ticket sales. MacGruber cost just $10 million to make—and somehow it still lost money.

It was a sad fate, but also an appropriate one. Created by director Jorma Taccone, MacGruber has one schtick. He’s MacGyver—a plucky, resourceful adventurer with a flowing mullet—but completely incompetent. Where MacGyver found his way out of every death trap through the use of improvised gadgets he built out of everyday household items, MacGruber fails to disarm the explosives he and his assistants encounter. Each SNL sketch ends with a fatal blast, and each subsequent sketch begins with MacGruber and his team back on the job, no worse for wear. There’s something beautifully poetic about all of this: MacGruber, the man who could never stop a bomb, couldn’t stop his own movie from bombing either.

In hindsight, the film’s failure looks just as inevitable as its hero’s. By 2010, Saturday Night Live had rightfully earned a reputation as the supplier of Hollywood’s most consistently unfunny comedies. (Another ignominious stat: MacGruber is the lowest-grossing widely released SNL movie ever.) Even fans of the MacGruber sketches would concede they were an uncomfortable fit for a movie; few ran longer than 90 seconds, and one was essentially identical to the next. What were Taccone and co-writers John Solomon and Will Forte (who also plays MacGruber) going to do with the remaining 88 minutes? The average MacGyver episode ran half that length, and the show had been off the air for more than 15 years by 2010; few, if any, of SNL’s young audience had ever watched it. Taccone was one of the creative minds behind Saturday Night Live’s popular Digital Shorts, but he had never directed a feature, and Forte had just one starring role to his credit: The Brothers Solomon, which made even less money in theaters than MacGruber. On paper, the film looks like one of MacGruber’s jury-rigged gadgets, cobbled together from unlikely elements, and almost certainly doomed to disappoint.

But bad ideas occasionally produce good movies, and MacGruber is a perfect example. Where most saw a guaranteed misfire, Taccone saw an opportunity: Rather than trod the same ground by further parodying the MacGyver television show, the MacGruber movie would send up the excessively macho action movies of the same period. Forte’s hero may look like Richard Dean Anderson, but he acts more like Rambo—if Rambo were a narcissistic coward who didn’t know how to fire an Uzi and also occasionally had sex with his wife’s ghost. After an opening scene where the villainous Dieter Von Cunth (Val Kilmer) steals a nuclear missile, MacGruber becomes a near carbon copy of Rambo III (and, to a lesser extent, Hot Shots! Part Deux, a previous Rambo spoof), with MacGruber retired to a Buddhist monastery in Ecuador, where his old boss Col. Faith (Powers Boothe, playing Richard Crenna) finds him and begs him to return to duty and save the world.

MacGruber puts together a team of heroes (hilariously and inexplicably, they’re all played by professional wrestlers), and then after he accidentally murders them all with homemade C-4, he reluctantly partners with Ryan Phillippe’s uptight Dixon Piper and Kristen Wiig’s Vicki St. Elmo to infiltrate Cunth’s operation and retrieve the missile before it can be detonated on American soil. Or at least that’s what MacGruber should be doing. Mostly, he’s distracted by other, pettier concerns, like proving he’s a better soldier than Piper, flirting with Vicki, and finding and destroying the man who cut him off while he was driving in Las Vegas. (Piper later finds MacGruber’s “Clues Notebook,” which is just page after page of the man’s license plate—KFBR392—and doodles of MacGruber shitting on his face.) 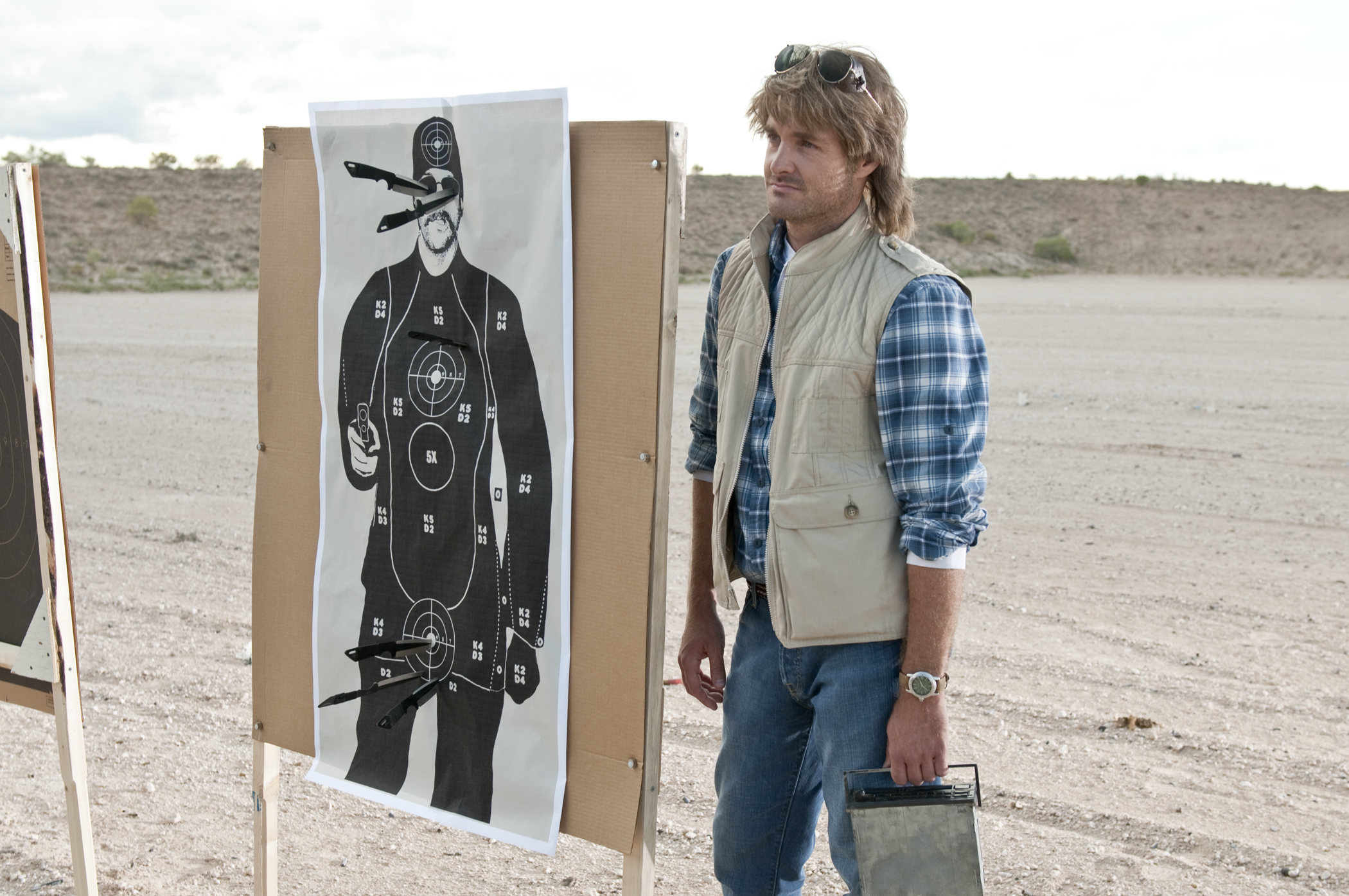 A lot of these gags are engineered to poke fun at the ridiculously noble and ripped he-men of 1980s action cinema, as is the visual aesthetic, designed by Taccone and director of photography Brandon Trost, which apes those movies’ glossy imagery. Every hallmark of the genre is faithfully duplicated—and then hilariously deflated. MacGruber falls to his knees and screams to the heavens to mourn the death of his brothers-in-arms—except he’s the one who killed them all. MacGruber walks away from an explosion in slow motion—except its the KFBR392 guy’s car, and MacGruber’s the one who set it on fire. MacGruber has a sweet ride of his own—a Mazda Miata with a front-end bra. It’s unveiled to the swaggering sounds of The Black Keys’ “Heavy Soul”—which gets interrupted by Toto’s cheese-pop “Rosanna” as Grubes turns on his detachable Blaupunkt stereo. MacGruber has a tough-guy one-liner—“Let’s go pound some Cunth”—but he says it over and over out of desperation and his inability to think of anything else to say. MacGruber and Vicki engage in a chaste, candlelit sex scene—and then Taconne cuts to a long, graphic shot of Forte humping Wiig while grunting like a wounded animal.

Every good spoof needs a straight man. Airplane! had Leslie Nielsen’s Dr. Rumack, who never cracked even as he pulled eggs out of a sick woman’s mouth. Blazing Saddles had Gene Wilder’s Waco Kid, who didn’t bat an eye at outlaws punching horses in the face. Boothe’s unflappable Col. Faith is a sturdy presence throughout MacGruber, but the movie’s true straight man is Taccone, who shoots MacGruber as if it were a legitimately badass balls-to-the-wall action spectacular. Most modern spoofs, shot on the cheap by hacks, look like garbage. MacGruber looks good enough to stand beside (or, in some cases, ahead of) its inspirations. No matter how broad Forte gets—and at one point, he’s waddling through an action scene naked, with a celery stalk hanging out of his ass—Taccone never shoots him like he’s in on the joke. There are many deadpan actors; Taccone is the rare deadpan director.

Forte, for his part, is a singularly fearless comedian, and not just because he’s willing to appear onscreen with celery up his butt. MacGruber is more than an idiot; at times, he’s an absolute monster. The origins of his feud with Cunth date back to their time together in college, when MacGruber stole Cunth’s girlfriend and then forced her to get an abortion. MacGruber, naturally, sees himself as a victim in the entire scenario, and Forte delivers the backstory in a stunning cold monologue. Most actors would be terrified to look this bad, and would try to redeem their character with charm or cheap laughs. Forte refuses to offer even a single redemptive quality—and then caps the scene by using Piper as a human shield in a gunfight. Classic MacGruber! 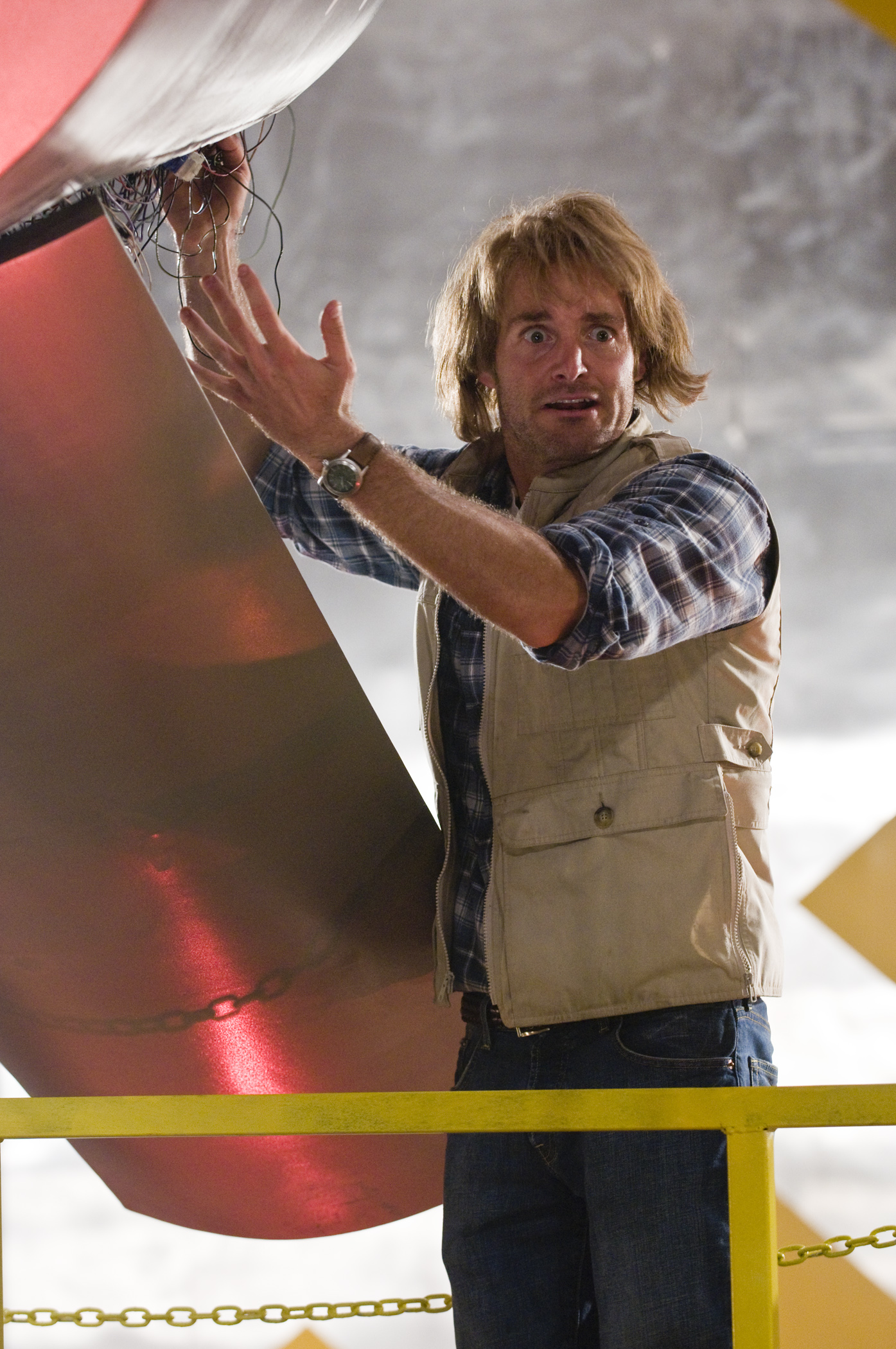 Comedy is subjective, and humor that edgy is bound to turn off some viewers—and in this case, it did. MacGruber earned its share of positive reviews, but the writers who hated it really hated it. Newsday called the movie “contemptible.” The Daily Mail said Forte “lacks the slightest vestige of credibility or charm” and doubted he’d ever star in another movie. (Not a great prediction.) Big Hollywood said it was “a MacWaste of time,” while The Globe And Mail called it “MacAwful.” When the film was nominated for Movie Of The Week consideration, one writer at The Dissolve who shall remain nameless (Scott Tobias) groaned in disapproval. (To his credit, he’s since come around.)

In his own dismissive pan for The New York Times, A.O. Scott repeatedly asked his readers “Why does this exist?” and ultimately found, within certain “ontological parameters,” that it did not. MacGruber’s box-office disaster nearly proved Scott right. But to MacGruber partisans, the film’s unfathomable origins were a significant part of its charm. In a world where seemingly every decision in Hollywood is motivated purely by its impact on the bottom line, MacGruber stands out by defying every rational commercial impulse. No studio executive alive (or at least employed) would request a soundtrack with so much terrible 1980s music, or a hero this shallow and despicable. Whatever your personal opinion of it, it’s hard to dispute that Taccone’s direction, Forte’s performance, a wildly unpredictable script, and a general go-for-broke attitude all make MacGruber unique. Good or bad, it’s no factory product.

Furry Vengeance earned more at the box office than MacGruber, but it’s already been completely forgotten. Meanwhile, MacGruber is well on its way to becoming one of the biggest cult comedies of the last decade—and people are still discovering it. In a sense, the story of every cult movie is the story of a tragedy, because a film can only acquire true cult status through box-office failure. But the same things that ensured MacGruber’s financial failure cemented its creative success, and while it’s frustrating to watch a great movie flounder in theaters, quality does eventually win out. There’s some kind of cosmic justice in that. In the end, the cream rises to the top. And then it pounds some Cunth.

Tomorrow, our discussion of MacGruber continues with a staff forum on the film’s surprisingly slick visual style, its pop-culture references, and its snarky depiction of the modern American hero. Then on Thursday, we break down the canon of Saturday Night Live films, one chart at a time.