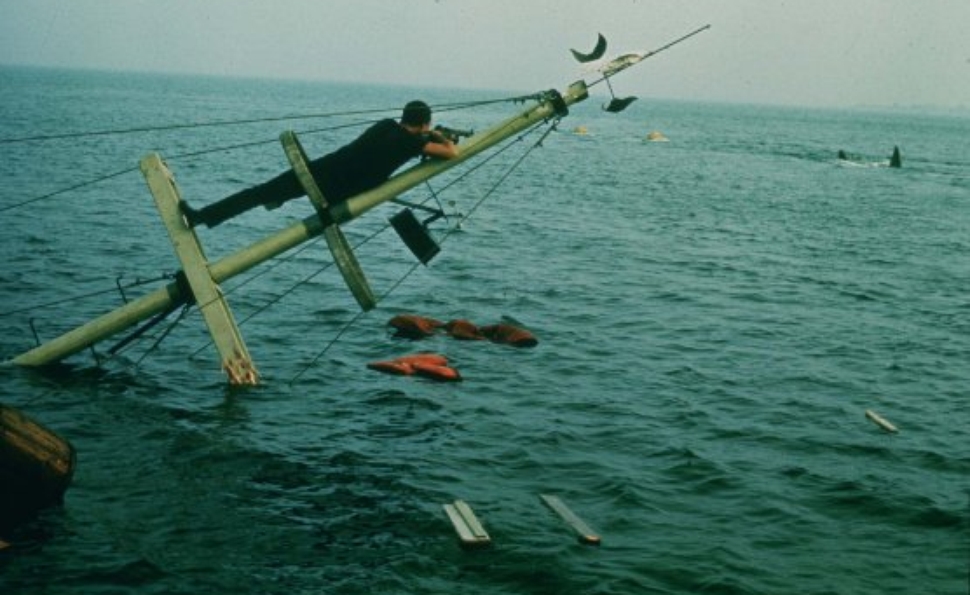 Jaws and the sound of dread and wonder

One of my college film professors used to begin each quarter’s class with a demonstration: He’d play the opening scene from Jaws, and the opening scene from Ordinary People, but with the soundtracks reversed. Set to John Williams’ Jaws score, Ordinary People’s scene-setting shots of upper-middle-class suburbia came off as ominous, rather than lyrical and elegiac. And set to Pachelbel’s Canon, Jaws’ scene of Chrissie Watkins getting eaten alive by a shark looked like water ballet.

Williams’ music makes a huge difference in Jaws. But so does the sound of water lapping against a clanging buoy. In that first scene, all the noises—musical and atmospheric—create a sense of isolation well before the low pulse of strings creep in. And even prior to Chrissie diving into the ocean and becoming shark chow, she’s sitting around a bonfire with friends, enveloped by the sound of aimless conversation, acoustic guitar, and crackling firewood—which itself sets a tone, establishing what she’s about to leave behind forever.

All of this may seem like Filmmaking 101: mixing natural sound, effects, and music to set a mood and evoke a location. But for a killer-animal movie, Jaws uses sound with remarkable sophistication and purpose. In fact, often in Jaws, the shark attacks are incidental to the movie’s portrait of life in a Northeastern tourist spot. The sound helps establish that reality.

Consider the two scenes in the clip above. In the first, Amity Island police chief Martin Brody (played by Roy Scheider) types up a report about Chrissie’s death, and fills in the cause—“SHARK ATTACK”—as he hears it over the phone. The audience never hears the medical inspector say those words, and Brody never repeats them aloud. Instead, director Steven Spielberg inserts a close-up of the report while Brody types into the blank. It’s a rare, mostly silent moment in the scene. Otherwise, Brody is surrounded by noise: the telephone ringing, his secretary Polly warning him that the 9-year-olds from the karate school have been “karate-ing the picket fences,” and a local businessman coming in to complain about a parking issue. The tone of the scene falls halfway between a fast-talking Preston Sturges screwball comedy and Robert Altman’s M*A*S*H, with the overlapping dialogue forcing viewers to keep up.

In the second scene, Brody and his wife Ellen (Lorraine Gary) are sharing a quiet moment at their oceanfront cottage, which is disturbed when Brody finds out that their sons are in a boat, tied to a dock behind their house. Once again, Spielberg and screenwriters Peter Benchley and Carl Gottlieb play with how to impart information, either through busy conversation or complete silence. Talking with Ellen, Brody squeezes in some theories about how old sharks might be. Meanwhile, Ellen changes her mind about whether her kids should be anywhere near the water when she flips through her husband’s book and sees a picture of a shark ramming a rowboat. Anyone just listening to the scene would have no idea why Ellen suddenly hollers at the boys to get out of their boat; it’s the combination of picture and sound that sells the punchline.

But the most striking use of sound here comes when Brody yells at his sons, and they yell back. Because Spielberg shoots them from far away, the kids’ voices sound distant—which is a standard cinematic technique for adding realism and dimensionality to a scene. Except that the boys in this scene are barely audible, because it doesn’t matter what they’re actually saying. What matters is the contrast between the peaceful domesticity and the fear that the hero’s loved ones are too small and too removed to save if some possibly centuries-old primal evil were to decide to grab a snack.

Eventually, Brody puts his faith in two people who know more about sharks than he does: salty old fisherman Captain Quint (Robert Shaw), and young oceanographer Matt Hooper (Richard Dreyfuss). Hooper enters the film around the half-hour mark, arriving at Amity Island right when the mother of another shark victim has offered a substantial bounty for the shark in question. The two scenes above show first Hooper’s arrival, and then him assessing a shark that some fisherman are claiming as the killer. In both scenes, Hooper is sardonically funny and, in his own nerdy way, kind of a tough guy. He snaps at boaters, giving them his expert advice (while using the proper terminology); he laughs at a bunch of dumb locals that are “all gonna die” because they’ve overloaded their craft; and he coolly identifies the captured fish as a “tiger shark,” in a short shot that makes Hooper look as grizzled as old Quint.

In that second scene, Spielberg and his screenwriters—or perhaps editor Verna Fields—skip the moment when Hooper actually tells the locals that they have the wrong shark. Instead, they show the repercussions, with them yelling at him, and him backing away and saying, “I don’t want to get beaten up.” It’s another clever bit of addition by subtraction, because it lets the audience fill in the blanks, and it puts the emphasis on the hostility, not on Hooper. Throughout both of these scenes, Hooper is just another voice in the cacophony that seems to surround Brody at all times. The big challenge for Brody in Jaws isn’t just to find one shark in a vast ocean, but to pick the right voice out of the din. 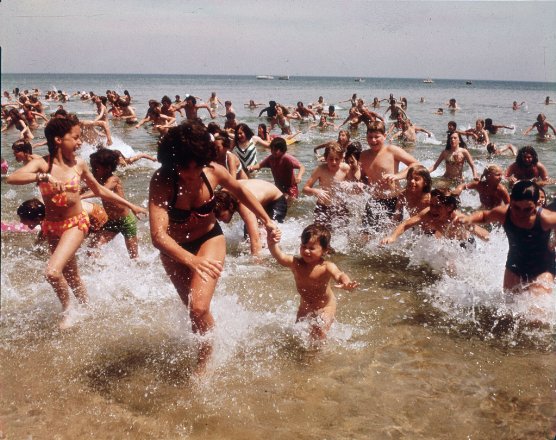 John R. Carter and Robert L. Hoyt are the only credited members of Jaws’ sound department, and filmmaking is such a collaborative art form that it’s difficult to say definitively whether they deserve most of the kudos for the sound design in the movie’s big suspense sequences, or if Fields’ editing suggested what the sound should be, or Benchley and Gottlieb’s script, or Spielberg’s direction. But there are two shark attacks in the movie that happen while a beach full of tourists watch in horror, and in both, the sound is as essential to building suspense as Spielberg’s camera placement and blocking.

Contrast these scenes: The one where Amity Island discovers en masse that there’s a shark in their midst, and sequences after the tiger shark’s been caught, when locals and tourists warily return to the beaches. The first beach scene contrasts the beach-dwellers’ banal chatter, the swimmers’ soft splashing, and the incessant radio echo (a common sonic motif in Jaws) with Chief Brody’s anxiety as he tries to keep an eye out for the shark that none of the city fathers want to believe is out there. In the second beach sequence, the area is more crowded, because tourist season has officially begun, signaled in part by the shift from the radio to festive band music. The sound fluctuates as the camera bobs in and out of the water, capturing swimmers about to be terrorized by a couple of smart-ass kids, and capturing tantalizing legs, dangling below the surface. And then, immediately post-hoax, the shark swims into a pond, away from the main beach, and wreaks havoc, while Williams’ score leans heavy on the tense, Bernard Herrmann-like strings.

That scene in the pond contains one of the best, meanest visual gags in Jaws, when one of those dangling legs falls off the top of the frame and drifts downward, severed and bloody. But the music is of special note. Jaws isn’t wall-to-wall with its score. In the first hour especially, Spielberg tends to wait until there’s actual danger before he turns Williams loose. This creates a division between Jaws veterans and Jaws newcomers. First-timers tend to be on edge anytime anyone’s in the water. On later viewings, the audience can focus more on how Spielberg and his collaborators build suspense, knowing everyone onscreen will stay safe until that first Williams “waaa-wump.”

The Jaws score is famous for the two-note signature that signals the shark’s arrival, but some of Williams’ best work in the film is in the non-terrifying scenes. The two snippets in the clip above are cases in point. In the first, Brody, Hooper, and Quint head out to sea in the Orca to hunt the shark, beginning an adventure that takes up most of the second hour of the movie; in the second, the men spring into action as the shark circles them. The music here isn’t nerve-racking at all. It’s sprightly in the first clip and rousing in the second, calling back to the great Hollywood adventure movies and Westerns.

That’s true of so much of Jaws. Spielberg and company invest a B-movie premise with thematic depth, cinematic craft, and a connection to tradition. Even in that opening scene, right before two young people peel off from their friends and head toward the ocean—where one of them will become dinner—Jaws dwells among those kids, in their late teens and early 20s, playing guitar and getting bombed around a campfire. The scene has all the makings of a Frankie and Annette beach-party movie, only more mature in content (with pot and booze) and more sophisticated in style (with the finer shadings of a location-shoot, and a camera that moves easily around the crowd).

Before long, Jaws leaves that party behind, and soon the audience is set adrift in dark water, with that lone buoy and that Williams score. The sound of that first Jaws scene is the sound of creeping dread. But it’s also the sound of a movie made with a remarkable amount of care, with a sense of place, and a promise of depth.

Tomorrow, our Jaws discussion continues with a staff forum dissecting the film’s style, structure, and performances, and taking time to appreciate some of its less-iconic moments. Then on Thursday, Keith Phipps takes a look at the wave of Jaws rip-offs that appeared in the original film’s wake.