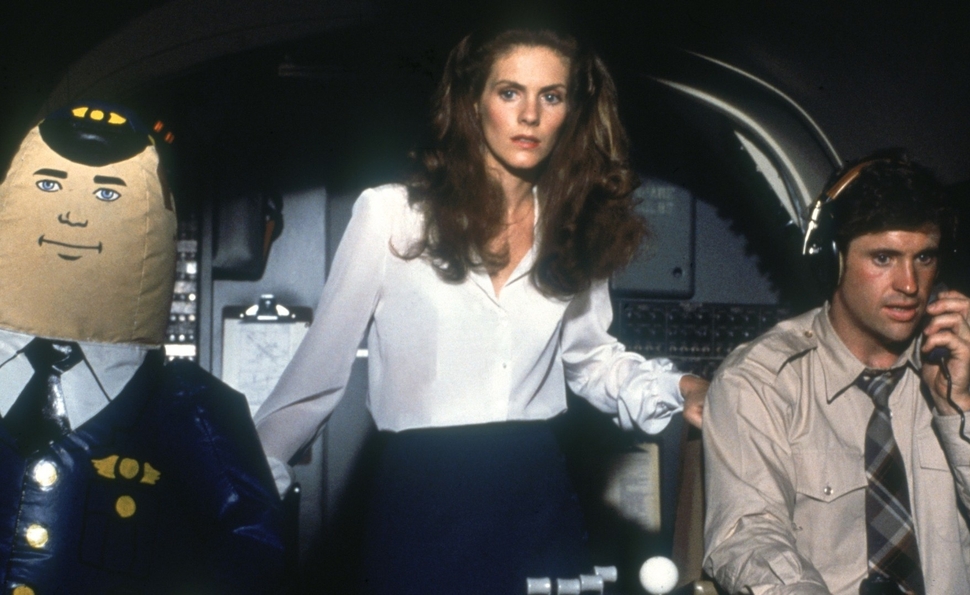 The straight-faced lunacy of Airplane!

The 1980 spoof Airplane! isn’t often praised for its subtlety. Movies featuring a scene in which a handful of shit literally hits a fan rarely are. Yet consider, for a moment, one of the film’s first gags. The credits roll over footage of a plane landing, then of cars pulling up to LAX. Then, after a cut to the pavement outside the terminal, a male voice announces over the airport’s PA system, “The white zone is for immediate loading and unloading of passengers only. There is no stopping in the red zone.” A female voice repeats the announcement. The camera follows Elaine (Julie Hagerty), a stewardess who plays a major role in the film; then it returns to the terminal pavement. But this time, the announcement has changed. Now the male voice claims there’s no stopping in the white zone, and the female voice corrects him. Their conflict escalates, as the camera alternates between inside and outside. He: “Listen, Betty, don’t start up with your white-zone shit again.” She: “We both know perfectly well what this is about. You want me to have an abortion.”

The whole thing plays out over the course of two minutes without calling undue attention to itself. Anyone who tuned out the announcers after their first declarations might not even notice it at all. It’s just another bit of ambient noise, a twisted variation on an authentic airport detail from the film’s era. According to the DVD commentary, the film’s co-writers and co-directors—David Zucker, Jim Abrahams, and Jerry Zucker, collectively known as ZAZ—even hired the actual voices behind LAX’s security announcements to make the moment more authentic. It’s parody that could almost pass as the real thing. Squint, and it doesn’t look much like parody at all.

Much of Airplane!’s genius comes from it being this close to what it’s sending up. The spine of its plot—and the exclamation point in its title—both come from Zero Hour!, a largely forgotten 1957 film starring Dana Andrews, Linda Darnell, and Sterling Hayden. Anyone revisiting Zero Hour! will find many of the elements later made famous in Airplane!: the on-board meal that poisons half the passengers and crew, the improbably named hero suffering from traumatic war memories, and some of the original dialogue. Even the presence of Kareem Abdul-Jabbar is a goof on Zero Hour!, which cast professional football player Elroy “Crazylegs” Hirsch as the plane’s pilot.

By 1969, Hirsch had moved on. After retiring from football and his short-lived acting career, he became Director Of Athletics at University Of Wisconsin-Madison. Coincidentally, also in Madison in the late 1960s, the Zuckers and Abrahams started the Kentucky Fried Theater, a live comedy troupe they later transplanted to Los Angeles. (They made their screenwriting debut in 1977 with the John Landis-directed The Kentucky Fried Movie, a sort of greatest-hits reel for the troupe.) The team caught Zero Hour! while mining late-night television for material to parody, and found it too rich to resist.

Another Zero Hour! player rose to prominence in the meantime, too. Arthur Hailey co-wrote and received story credit for the film, reworking material from his 1956 Canadian teleplay Flight Into Danger. In 1958, he and author John Castle reworked that same material into a novel called Runway Zero-Eight, co-written with John Castle. In 1968, Hailey published Airport, another novel about fraught air travel; two years later, the film adaptation sparked the wave of disaster films that made the genre one of the defining, though mildly disreputable, elements of 1970s film. Airport begat the fondly remembered The Towering Inferno and The Poseidon Adventure, but also Earthquake, Avalanche, Meteor, and Airport’s own direct sequels. Every other year, a new star-studded, increasingly far-fetched sky-bound thriller would come out, with titles that could double as expiration dates: Airport 1975, Airport ’77, and The Concorde… Airport ’79.

As anyone who’s seen that last film (or just one key scene) can attest, by the end of the 1970s, the disaster genre had pretty much become a parody of itself. Yet if anything, that just made the environment richer for Airplane! In gag after gag, the film keeps a straight face while driving a normal-looking disaster movie off the rails. Asked whether he’d prefer a smoking or non-smoking ticket, rattled fighter pilot Ted Striker (Robert Hays) says “Smoking,” and receives a ticket that’s emitting smoke. He doesn’t seem to notice anything out of the ordinary about the visual pun; he takes it without comment. When he boards the plane a few minutes later, the ticket is still fuming. That’s just the way things work in the Airplane! universe.

Some of the best gags nudge Airplane! into madness by degrees. When tower supervisor Steve McCroskey (Lloyd Bridges) announces that he picked the wrong week to quit smoking, it plays as a hacky line. As his addictions grow more intense with each subsequent pronouncement, Bridges never winks at the audience. It’s an ingenious bit of casting. A veteran of film and television, Bridges wasn’t known for his work in comedies. In fact, the previous year, he appeared alongside Raymond Burr, E.G. Marshall, and William Shatner in the TV movie Disaster On The Coastliner. The same was true of Peter Graves, Robert Stack, and Leslie Nielsen, all well-known dramatic actors with instantly recognizable faces, none of them known for their comedy chops. This was all very much by design. In making the film, ZAZ had to fend off attempts to make the stars sell the comedy, including one studio that saw it as the perfect vehicle for Dom DeLuise and Harvey Korman.

ZAZ had a different sort of comedy in mind, however, and that stone-faced approach extends beyond the casting, and into other elements of the film. For the score, they brought in Elmer Bernstein, a film composer as respected as they come. They tasked him with creating a score he thought appropriate for a B-movie, and he responded with melodramatic music that’s pounding and repetitive, but not so over-the-top that it would sound out of place in a dramatic movie. Similarly, the film looks flat and not fussy, just like other films in its supposed genre. It doesn’t, in other words, look funny.

Yet Airplane! is funny. Deeply and consistently. It doesn’t let a moment go by without a gag, and it maintains a remarkable hit-to-miss ratio. The jokes range from an elaborate Saturday Night Fever parody—in which Striker performs increasingly unlikely dance moves, and another dancer accidentally invents new steps after he’s stabbed in the back—to infinitely quotable wordplay (“Surely you must be joking!”, etc.), to subtle touches, like the way the sounds of whirring propellers inexplicably accompany a jet plane.

For all the jokes, though, there’s no nudging, no cues to laugh. The twentysomething Ted flashes back to war memories that take the form of World War II combat footage. Ted drones on and on, not noticing that his companion has hung herself out of boredom. Elaine lapses into a purple monologue about times past, which quickly slips in a detail about her sitting on Ted’s face—and she makes the comment without changing tone, as if this was a standard element of a melancholy lover’s lament. Spoofs have appeared in abundance in the years since Airplane!, but it feels wrong to call it a thriving form. The ZAZ team did well with the underappreciated Top Secret, the quickly canceled series Police Squad!, and that show’s much more successful movie version The Naked Gun; the latter two projects starred Nielsen, a highlight of Airplane! Yet Nielsen’s subsequent work highlights what Airplane! gets so right, and others get so wrong. In films like Repossessed and Spy Hard—parodies of horror films and spy movies, respectively—Nielsen practically begs for laughs as he plays the part of the rubber-faced bungler, the dense center around which all the jokes revolve. In Airplane! and his other films with the Zuckers and Abrahams, the humor comes from his refusal to acknowledge that he’s in on the joke, or even suggest there’s any joke at all. Like the film around him, he doesn’t crack a smile, even as he looks his co-stars in the eye and says for the third time, this time with the plane safely on the ground, “I just want to tell you both, good luck. We’re all counting on you.” And it’s hilarious.

Tomorrow, our Movie Of The Week discussion of Airplane! continues with a Wednesday forum discussion on the art of the spoof, our favorite lines, and the film’s legacy. And on Thursday, Mike D’Angelo argues that era-specific material helps spoofs, rather than hurting them.