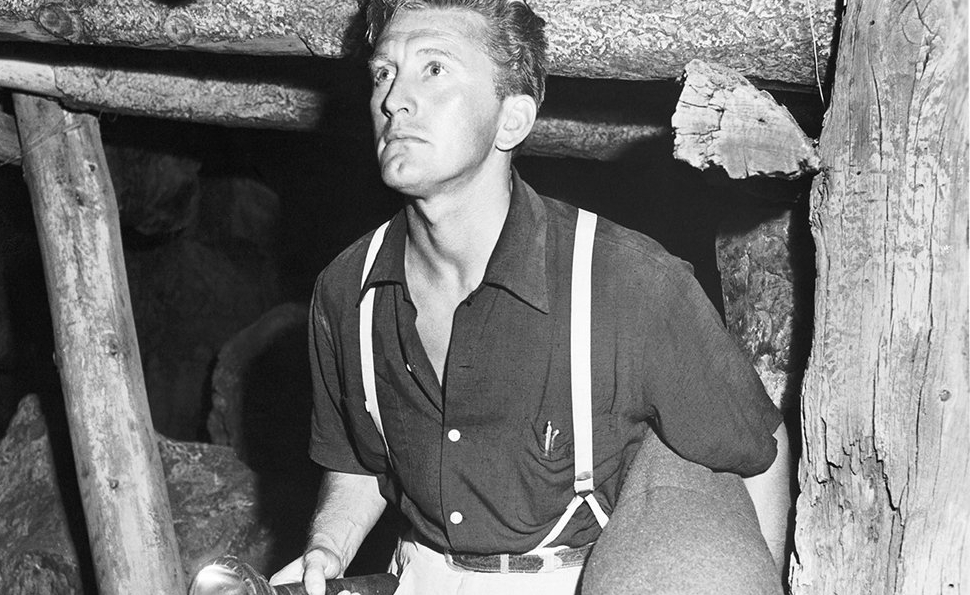 Billy Wilder never got darker than Ace In The Hole

“Now go on home, all of you! The circus is over.” —Kirk Douglas, Ace In The Hole

In Cameron Crowe’s excellent Hitchcock/Truffaut-style book Conversations With Wilder, Billy Wilder, still sharp and cantankerous in his early 90s, generally remembers his hits fondly and his flops bitterly. As caustic as his films could be, especially when he was working in the noir genre, Wilder saw himself as an entertainer and a populist, and seemed to feel that any failure to connect with the viewing public was his fault. The one major exception: 1951’s Ace In The Hole, a critical and commercial failure that was surrounded on all sides by successes like Double Indemnity, The Lost Weekend, Sunset Blvd., Stalag 17, Sabrina, and The Seven Year Itch. This nasty little satire got him in trouble with Hays Code censors, who didn’t like its depiction of a corrupt law official; with Paramount Pictures, which changed the title to The Big Carnival at the last minute; and with American moviegoers, who rejected Wilder for the first time. He remains proud of the film, but still puzzles over the response to it:

I just changed my mind about the audience. I just think that if you do something very fine, that they will get to the core of the thing, what it’s about, what it’s really about. But they never, at the time, they never gave it a chance. Somebody in an editorial, I think, in Life magazine said that ‘Mr. Wilder should be deported.’ I felt I was not with it anymore. That I wrote against the audience, the people who paid, in those days, a dollar fifty, two dollars. They felt robbed. They wanted to be entertained, entertained in a serious way, but not too serious a way. Then again, they did go for Double Indemnity. You can never, never, never predict an audience’s reaction.

Ace In The Hole is known as one of the most cynical movies ever made—a vicious, noir-inflected attack on tabloid journalism and its corrosive effect on society, and the soul. In Chuck Tatum (Kirk Douglas), a former big-city newspaperman who lands at a small-time Albuquerque daily and sinks his teeth into a story that will return him to prominence, Wilder offers a hero no more esteemed than the venal opportunists of any other noir. In doing so, he throughly dismantles the romantic image of journalists as ink-in-the-veins truth-tellers. Instead, he presents a breed of human being that acts out of self-interest, not some larger sense of social responsibility. Chuck’s instincts as a storyteller are impeccable, but counter to his ostensible mission as a reporter: If a story doesn’t fit the narrative he’s framed for it, he’ll manipulate it until it does. And if a man suffers needlessly as a result? His fault for putting himself in a predicament. 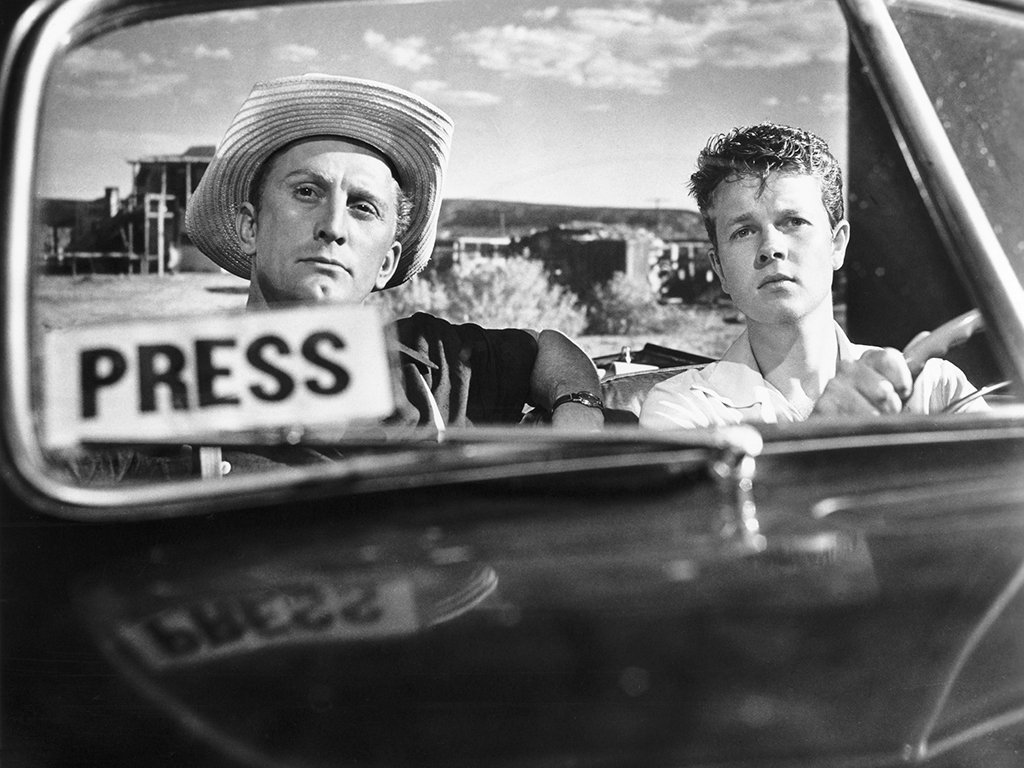 There’s plenty of contempt to go around in Ace In The Hole, but the field of journalism doesn’t actually get the worst of it. Chuck creates a media sideshow by milking his exclusive on a man named Leo Minosa (Richard Benedict), who’s pinned by a cave-in in New Mexico, but Wilder finds more nuance in the field than people tend to acknowledge. In a sense, Ace In The Hole is really about the battle for the soul of journalism, with Chuck on one end, his by-the-book editor/publisher Jacob Q. Boot (Porter Hall) on the other, and Herbie (Bob Arthur), an impressionable young photographer, vacillating between the two. But the true and most consistent objects of Wilder’s scorn may better account for why audiences rejected The Big Carnival. Their names are Joe and Jane Q. Public.

Meet Mr. Al Federber (Frank Cady), an insurance salesman on vacation with his wife Nellie (Geraldine Hall), and their two boys. The Federbers—what a wonderfully pathetic surname—were on their way to Bottomless Lake for a fishing, boating, and camping trip until they stumbled onto Chuck and the Minosa story. With Leo trapped in the cave while searching for Native American artifacts—“Ancient Curse Entombs Man,” Chuck’s headline screams—Chuck convinces Leo’s pretty wife Lorraine (Jan Sterling), a fellow big-city exile, to stick around to soak the Federbers and their kind for all they’re worth. The once-sleepy Minosa family restaurant and store that sits in front of the 400-year-old cliff dwelling where Leo is trapped will now, Chuck promises, be a moneymaking bonanza. By buying Chuck’s scoops and Lorraine’s burgers and native headdresses, the Federbers keep both entrepreneurs in business. Without them, Chuck and Lorraine are just choking on dust. Chuck shows his appreciation:

You saw those people. To you, they’re a couple of squares. To me, they’re just the beginning. To me, they’re Mr. and Mrs. America. I wasn’t sure before, but now I know they’re going to go for it. They’ll eat it up, the story and the hamburgers. You’ll sell all your hamburgers, hot dogs, soda pop, and all your Navajo rugs. There’s going to be real dough in that cash register by tonight.

Wilder thought Mr. and Mrs. America were going to go for Ace In The Hole, too, since his commercial instincts had never led him wrong up to that point. And his confidence animates Chuck, who’s also guilty of miscalculation, just not about the waves of rubberneckers and business owners who follow the Federbers’ lead and descend on the site over a five-day stretch. With the contractor predicting only a 14-hour dig to extract Leo from the hole, Chuck successfully pleas for a “safer” five-day dig from above, and works out a deal with the sheriff to protect his exclusive access to Leo in exchange for the respect of the voters the sheriff will need for the next election. But there’s still a spot of pink on Chuck’s soot-covered soul: He cares enough about Leo that he wants him—needs him—to live through this ordeal, which is why he extracts assurances from the doctor that Leo is made of stern stuff, the type of guy who could walk around with a burst appendix just to keep a promise to his wife. It’s fine if Leo suffers for the story; it isn’t fine if he dies. In the world of Ace In The Hole, this counts as an important moral distinction.

By contrast, what happens to Al Federber if Leo dies? What happens to all the other tourists who have flocked to the site? Or the carousel rides and circus tent that have popped up, too? The gawkers take off their hats when it happens—and Al’s wife Nellie does seem upset—but everyone just packs up and goes to the next spot. All in all, it’s been a memorable vacation for the Federbers: The boys got headdresses as souvenirs, they can tell everyone who listens the story of how they were the first people on the Minosa site, and, on national radio, Al got the chance to do a little business himself. “I’m in the insurance game myself,” he tells a reporter. “You never can tell when an accident’s going to happen. I sure hope Leo had the good sense to provide for an emergency like this. Now you take my outfit, the Pacific All-Risk…”

As far as Wilder pushes it—and, based on his comments in Conversations With Wilder, he felt he pushed too hard—viewers still stay with Chuck until the end of the movie. Because as dim as his conscience may be, it glows like a lighthouse by comparison with the other vultures that prey on this unfolding tragedy. When Chuck announces from atop the cliff that Leo is dead, he can’t abide the soberness of the scene below, where the rubberneckers and hucksters who spent days feasting off this story, just as much as he had, go into mourning. He’s filled with self-loathing, and loathing for the human race—and Wilder is right there with him. That’s how Ace In The Hole ends: With Chuck Tatum and Billy Wilder telling the bloodsuckers in front of them that it’s time to go home.

Our discussion of Ace In The Hole continues tomorrow with a forum discussion on the film’s style, legacy, and view of journalism. Then on Thursday, Matthew Dessem explores the relationship between Wilder and his screenwriting partner, Charles Brackett.