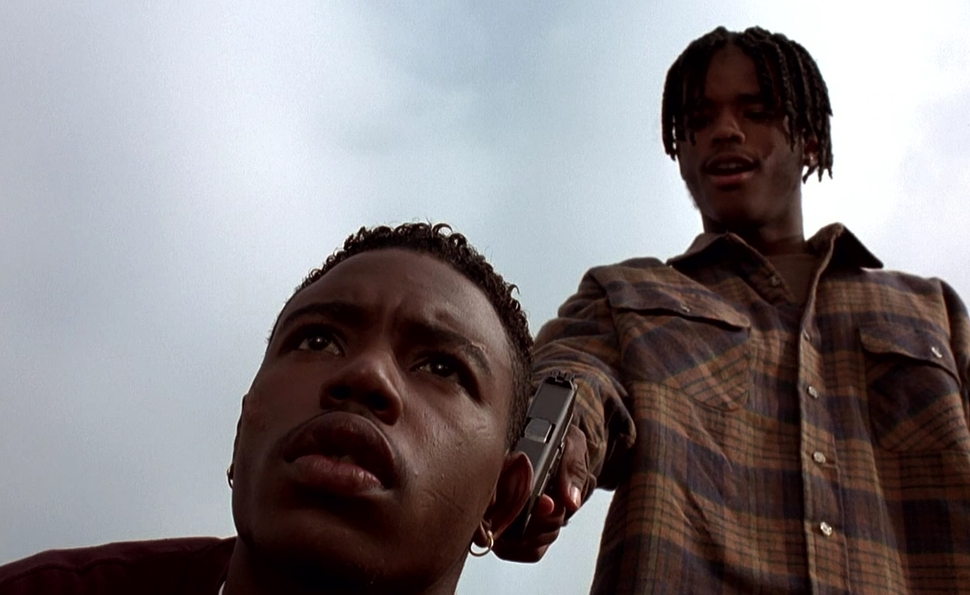 For the Watts survivors of the Hughes brothers’ incendiary 1993 film Menace II Society, death isn’t an abstract concept; it’s everywhere, as much a part of the atmosphere as oxygen. It doesn’t happen to your grandmother at the end of a long struggle; it happens to your brother, your cousin, your niece, or the guy down at the corner store—anyone who was in the wrong place at the wrong time. From the beginning, death seems to be stalking Caine Lawson (Tyrin Turner), the film’s protagonist and narrator. It comes at him from all angles. The question isn’t whether he will die, but how and when. Like the protagonist of William Friedkin’s 1985 thriller To Live In Die In L.A., Caine spends Menace II Society chasing death. Eventually, they catch up with each other.

Murder and other forms of meaningless violence are in Caine’s bloodline, part of his parents’ poisoned legacy. An early flashback reveals that in the late 1970s, Caine’s drug-dealing father Tat (Samuel L. Jackson, oozing charismatic menace) was a drug dealer who shot a client/buddy in front of a prepubescent Caine. Tat ostensibly shoots the man point-blank in the chest over an outstanding debt, but the killing is primarily to make a point. The man Tat impulsively kills seems cavalier about the prospect of death. As an ex-con recently released after a five-year bid, he isn’t frightened when staring down the barrel of a gun. Like seemingly every other character in the film, he’s numb and jaded because of his experiences. He might have post-traumatic stress disorder, but he doesn’t seem like someone who would ever visit a psychiatrist, let alone receive treatment.

The defiant ex-convict all but dares Tat to pull the trigger. That’s all it takes to get Tat to cross a line that doesn’t seem to mean much to either party. Caine casually establishes that seeing his father kill somebody wasn’t an isolated incident; it was something he got used to. And Menace II Society is, on some level, about an entire community getting used to things no one should ever have to accept. 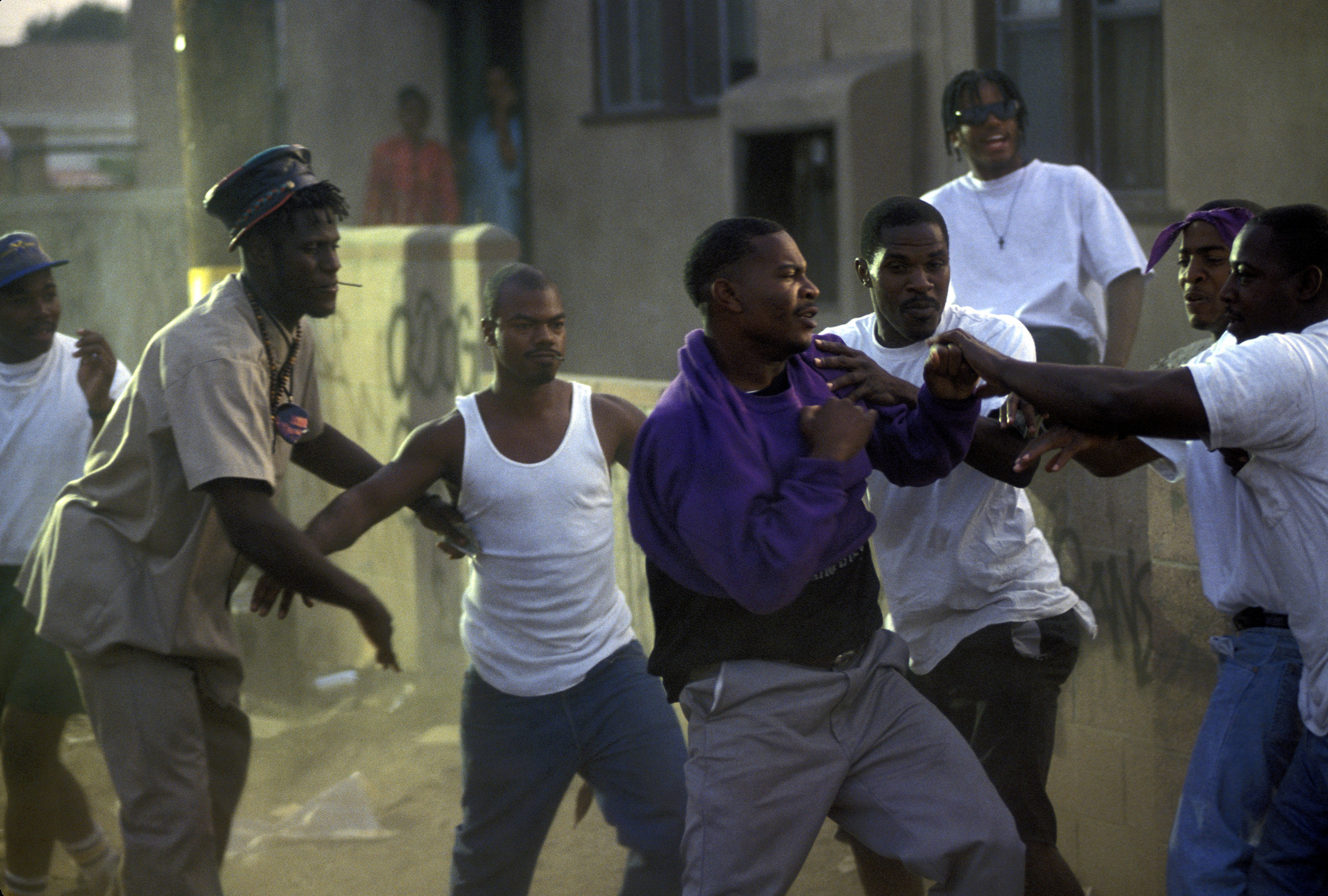 The film isn’t subtle about connecting the dots between its anti-heroes’ violence-infected lives and the overarching social causes that produce generations of poverty and violence. The film explicitly posits the Watts riots of 1965 as the moment when hope and optimism fled, and drugs and gangs began to infiltrate communities. “When the riots stopped, the drugs started” is Caine’s succinct summation of the situation.

After the opening credits, Menace II Society shows footage of Watts during the riots, looking like a war zone, with homes and businesses ablaze, and white cops beating half-dressed black men with clubs. Meanwhile, news reports tell of the National Guard being authorized to use whatever force necessary to contain an insurrection by American citizens. This is the ugliness and insanity that spawned the brutality of the Watts ghetto, the primordial stew out of which emerged gangs, drug dealers, and young nihilists who don’t expect to live past 40. The film’s opening scene exposes just how little it takes for someone to take a life in this environment.

Viewers hear Caine and O-Dog (the charismatic Larenz Tate, in his career-making role) before seeing them. They’re talking about the kind of bullshit kids generally talk about—girls and partying—as they swagger into a convenience store. The tension is thick the moment they enter; the owners regard them with the wary, distrustful glares O-Dog and Caine know all too well, and resent. The uneasy peace between these two black kids out to buy some liquor and the Korean store proprietors shatters when the counterman references O-Dog’s mother. In a fit of rage, O-Dog shoots him over and over. 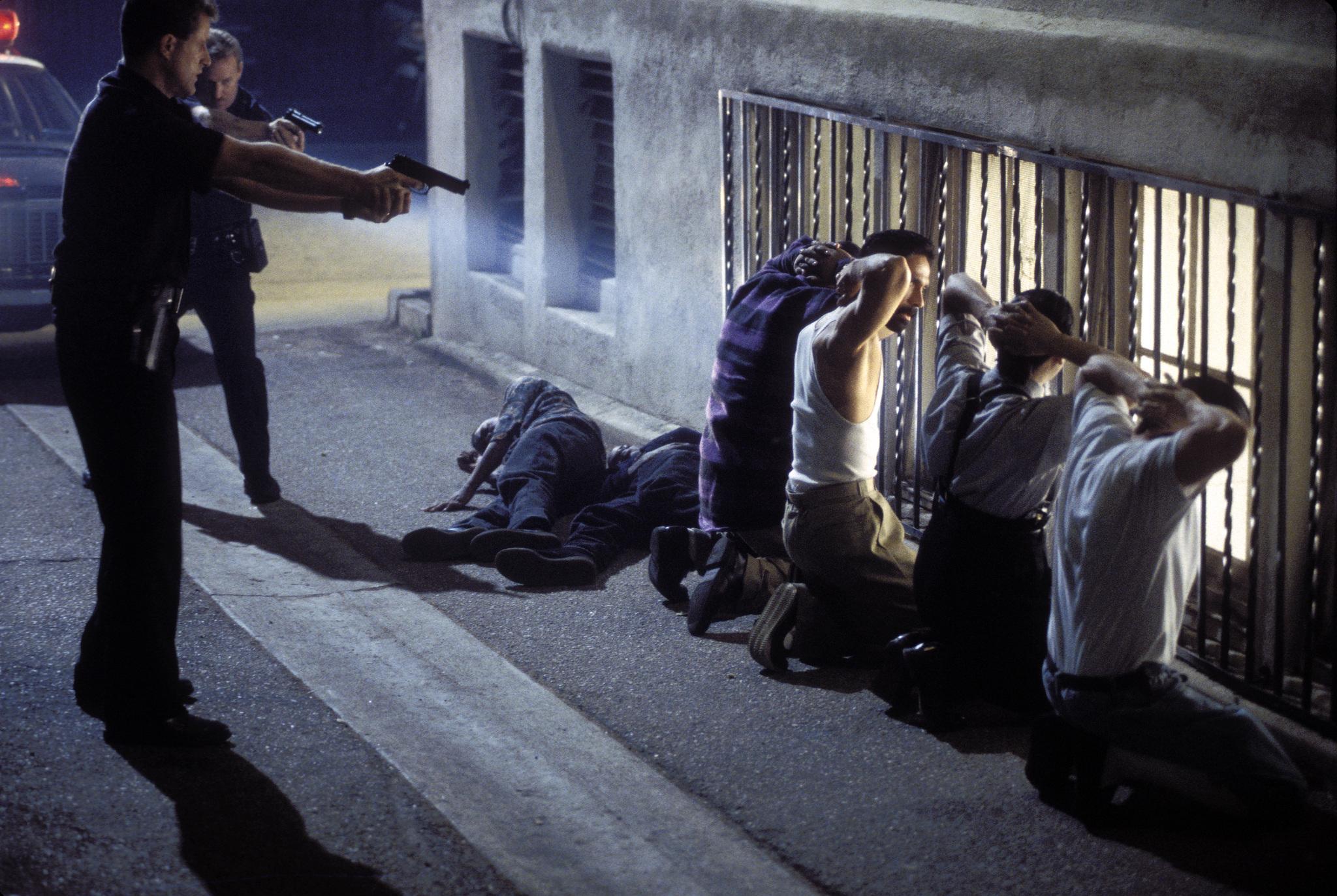 That’s how cheap life is in Menace II Society. The difference between a tense but uneventful convenience-store transaction and a double murder that destroys the lives of both the killed and the killers can be something as small as a mumbled, “I feel sorry for your mother.” Killing a stranger over a slight means so little to O-Dog that he instantly recontextualizes the crime he just committed as entertainment, and demands not just money, but the videotape of the murder.

O-Dog doesn’t want to destroy the tape; he wants to watch it. Beyond that, he wants to distribute it throughout the hood. O-Dog’s ego and sociopathy transform evidence of an unconscionable crime into something to brag about, a party tape to impress his buddies. This insane exhibitionism should doom O-Dog and Caine. It shouldn’t take Scotland Yard to connect a brutal liquor-store slaying to the guy showing surveillance video of the crime at parties throughout Watts. But in Menace II Society, death can come from anywhere, and while the liquor-store killing and its second life as transgressive entertainment plants the seeds of O-Dog’s destruction, by the end of what Caine prophesies in his narration “was going to be a long summer,” another set of players will want to kill Caine for reasons that have nothing to do with him guzzling beer while his buddy kills two people in a widely disseminated video.

Caine’s life isn’t devoid of positive influences. If anything, there’s an excess of characters eager to show him a way out of the life where he’s mired. At home, Caine’s loving, churchgoing grandparents try to infect Caine and O-Dog with their faith, but in one of the film’s slyer touches, they completely reject the godly grandparents’ evangelizing, despite the crucifixes the men wear around their necks. Caine’s Muslim buddy Sharif (Vonte Sweet) wants Caine and the rest of his pals to follow his spiritual path, and he brings in his father (Charles S. Dutton) to deliver a straight-up sermon on the righteous way to go. As if all that weren’t enough to push the morally conflicted protagonist onto the straight and moral path, Ronnie (Jada Pinkett), the single mother Caine has looked out for since the father of her son went to jail, encourages Caine to leave town and start a new life with her and the boy. 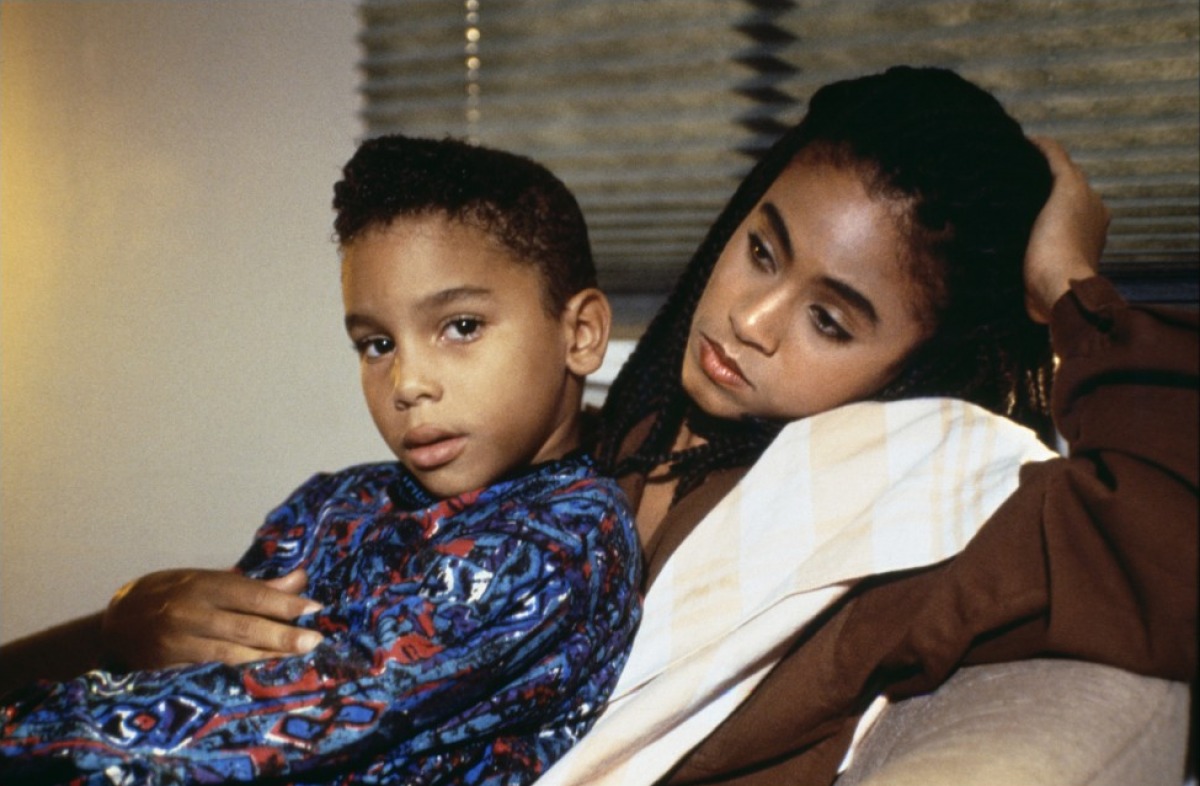 Menace II Society provides Caine with multiple ways out of his situation. Yet it’s a testament to the film’s finely tuned fatalism that it doesn’t seem likely that he’ll take any of them. He isn’t looking for a way to escape oblivion and a bad end; he’s looking to embrace them.

Menace II Society makes it all too easy to see why Caine finds it easy to resist the righteousness all around him. As a message movie, Menace II Society is often stilted and a little clumsy; for all Dutton’s charisma and magnetism, the film slows to a halt when he delivers his speech, and Caine’s relationship with Ronnie seldom registers as anything more than an obligatory distraction. As a darkly comic film noir that doubles as a slice-of-life exploration of what it means to be young, aimless, and desperate in Watts in the early 1990s, however, the film is riveting and essential. The angels in Caine’s life are well-meaning stiffs; the demons on his shoulder are endlessly fascinating, and a whole lot more convincing.

So when Caine gets shot in the shoulder during a car-jacking that kills his cousin Harold, it doesn’t take much for O-Dog to persuade Caine to join him on a retaliatory mission for revenge. Caine’s only caveats are that he won’t fire into a crowd, and he won’t kill children or old people. Caine has a moral compass, but not much of one. Killing someone doesn’t instill him with guilt or remorse, only a strong conviction that he could, and probably would, kill again if the opportunity presented itself. In an instant, killing goes from an extreme and unforgivable transgression to an item in Caine’s skill-set. Killing loses its horrifying power and becomes queasily palatable.

For O-Dog, killing is more than possible and palatable; it’s easy, almost a reflex he resorts to when something offends him, whether it’s a clerk talking about his mother, or a homeless drug addict offering to suck him off for a hit. This offer is met with a series of fatal handgun blasts, but nobody even seems to notice that a man has just been killed in broad daylight. The scene even has a morbidly comic tag when O-Dog follows up his casual murder by retrieving the greasy paper bag containing the basehead’s hamburger and offering it to one of his buddies.

In the end, Caine’s demise is precipitated not by the murder O-Dog committed in the first scene, or the killing Caine himself committed to avenge his cousin’s death. It isn’t even the result of Caine’s long-simmering decision to pursue an important romantic relationship with Ronnie, a strong woman who loves him and could be his personal salvation. Caine’s demise is caused by his vicious stomping of the cousin of a woman he knocked up, then wanted nothing to do with, a woman who barely factors into the narrative, or into Caine’s life. So while there’s a sense of cause and effect behind Caine’s death, there’s also the strong sense of randomness that courses through the film. Caine’s end seemed preordained from the beginning; how and when he dies seems appropriately arbitrary and senseless.

Early in the film, Caine’s grandfather asks the central question of the film: does Caine want to live or does he want to die, and he answers, truthfully, that he does not know. Life doesn’t seem to matter much to the characters here: Caine does not realize the value of his own life until the moment that cheap, tawdry, violent and directionless existence is taken from him. Caine’s death at the end of Menace II Society has a faintly tragic air, but for a man who has spent the entire film doubting the value of life (his own and the lives of others), it’s also something else: a relief. It’s his way of escaping an unlivable life, albeit not in the manner he might have intended.

Tomorrow, our Menace II Society discussion continues with a group conversation on the film’s narrative randomness, blunt morality, and clear Martin Scorsese influences. And on Thursday, Noel Murray looks at its place in the tradition of the gangster movie.