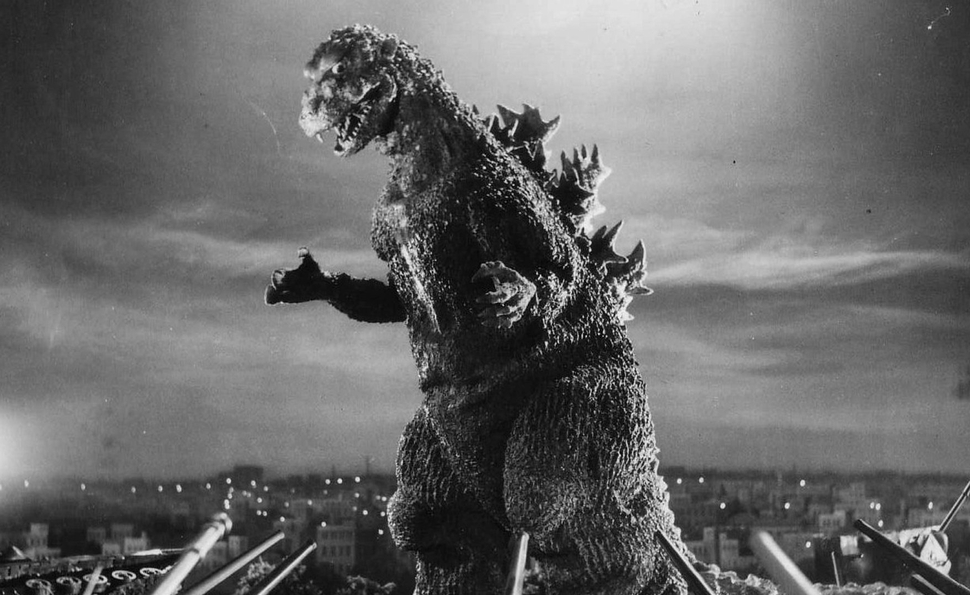 Godzilla and the age of atomic anxiety

Running just a little over 90 minutes, the original Japanese version of Godzilla isn’t particularly long, nor inclined to waste time. It begins with a disturbingly staged attack on a fishing boat, then follows it with another, shorter, but no less decisive disaster involving the ship sent to investigate and look for survivors. Another attack follows, this one on Odo Island, whose residents still speak of a sea monster called Godzilla, though the younger generation has started to treat the stories as tall tales that only the older generation believes. As if sensing their doubt, Godzilla arrives in the middle of the night to prove them wrong, revealing himself to the islanders who have forgotten to fear him. He doesn’t, however, reveal himself to the camera. In a change from the original script, director Ishirô Honda keeps viewers waiting, not offering a good look at Godzilla until the film has passed the 20-minute mark.

When Godzilla does appear, it’s a breathtaking moment: Here, via a neat bit of trick photography, is what we’ve been hearing about. An ancient monster—part dragon, part dinosaur, part atomic weapon—stomps its feet, rears its head above the hill, and lets out a roar (or, more accurately, “roaaarrrrrrrr!!!”) of anger as tiny humans flee in horror. Even now, on the other side of countless sequels, remakes, animated spin-offs, toys, comic books, and other ancillary products, it’s kept its chilling power.

That’s partly thanks to Honda’s careful filmmaking. Like all smart directors of monster movies, he withholds the baddie until the suspense has reached the breaking point. Then he withholds nothing, letting viewers gape at the gargantuan threat that sends those who see him screaming in horror. It’s also partly because such introductory moments tend to retain the shock of the new, no matter how often they’re repeated, or how far their subsequent incarnations stray from the source, whether it’s Frankenstein’s monster rising from the table, or the first image of Freddy Krueger’s razor glove. But, above all, it’s because Godzilla is a deeply felt movie. In Godzilla, it finds the embodiment of nuclear-age anxieties in general, and of the one country to be hit with atomic bombs in particular.

Consider for a moment what it must have been like to live in Japan after World War II, even factoring out a defeat that discredited an imperial ideology in which the populace had been immersed their entire lives. As the Cold War ratcheted up, the whole world started to consider the possibility of nuclear annihilation, but only Japan had direct experience with nuclear warfare, after the bombings of Hiroshima and Nagasaki at the end of the war. The dropping of a nuclear bomb wasn’t just a theoretical nightmare, but the return of a cataclysm still in recent memory, one that affected friends and family, and scarred those who survived. Then, in March of 1954, the year of Godzilla’s November release, the Japanese fishing boat Daigo Fukuryu Maru (which translates as “Lucky Dragon 5”) sailed into waters near a secret American test of the hydrogen bomb. The incident poisoned the 23-man crew, killing radio operator Aikichi Kuboyama months later. His last words: “I pray that I am the last victim of an atomic or hydrogen bomb.” A year after Godzilla, Akira Kurosawa released I Live In Fear, starring Toshirô Mifune as a rich industrialist so fearful of another nuclear attack on Japan that his relatives have him declared mentally incompetent. The dark joke at the film’s heart: Aren’t those not crippled by the thought of another attack the insane ones?

From such impossible situations come monsters. The tragedy of the Daigo Fukuryu Maru reintroduced the never-absent specter of a nuclear attack and inspired Godzilla’s opening scene. It isn’t the last conscious echo of the nuclear threat. Godzilla’s attack on Tokyo begins in destruction and ends in images of a fire-drenched apocalypse. It’s a carefully timed setpiece, in which the initial thrills of watching Godzilla do what Godzilla does gives way to horror as he just keeps doing it. It’s spectacular, then exhausting, then, in the end, horrifying. There’s little dialogue, but what’s there counts, particularly a mother trying to comfort her children with the thought that they’ll soon join daddy. In the wake of Godzilla’s rampage on Tokyo, Honda brings in harrowing images of the survivors, moving the camera up a long row of hospital beds filled with the dying, and lingering on one child receiving a grim diagnosis. They’re extras, characters who never get developed, but Godzilla makes it hard to forget their faces. 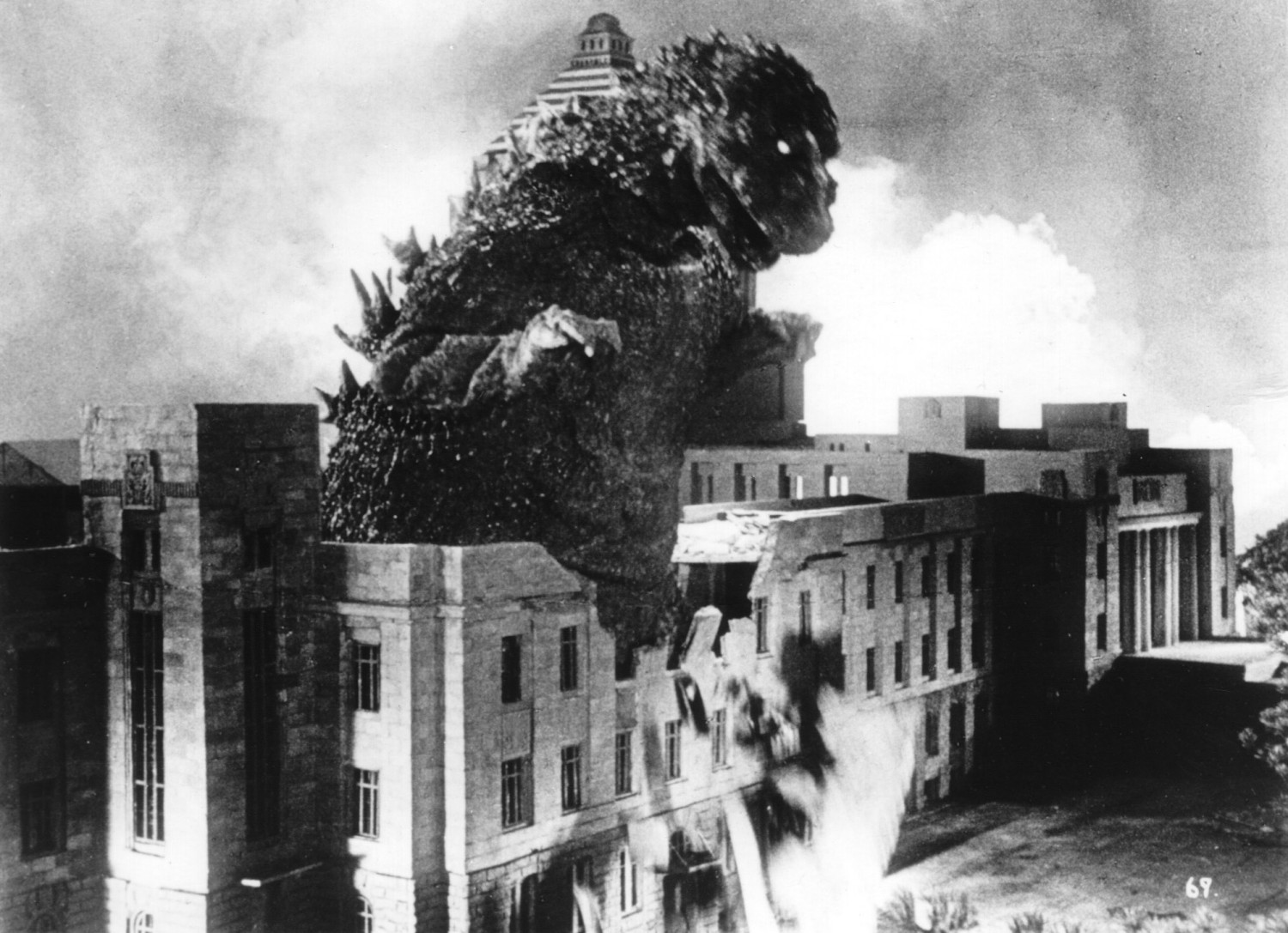 It was long known in the West that Godzilla was the best, and darkest, entry in what became a long series of films featuring the giant lizard, but it wasn’t known just how good it was until its 2004 re-release. Until then, the film was only widely available in a 1956 re-edit known as Godzilla, King Of The Monsters!, which less-than-seamlessly inserts American star Raymond Burr (as a reporter named Steve Martin) into the action. As an earnest attempt to repackage the film for English-speaking audiences, it isn’t bad, but Burr’s constant explanations of the action create a distance that isn’t there in the original. The sum effect is the difference between watching a movie about what might happen to others, vs. being dropped in the middle of the action, fearing for the worst along with everyone else.

As the Godzilla series went on, it got lighter and sillier. Godzilla went from heel to hero, defending Japan against even worse threats. That was probably inevitable. Monsters grow less frightening as they grow more familiar, and how many times can the same giant lizard destroy the same metropolis, anyway? No matter how entertaining they were as silly spectacle, the Godzilla films grew less scary as they drifted away from the creature’s roots in nuclear-age anxiety. Sometimes a monster is a metaphor for all that’s troubling about a certain time and place; at other times, it’s just a guy in a rubber suit smashing a bunch of miniatures. That’s a large part of why the 1998 American remake of Godzilla didn’t work, while the Godzilla-inspired Cloverfield did. When a horror movie, even one with a premise as ludicrous as Godzilla’s, is invested with genuine fear, and expressed with real skill and artistry, it’s impossible not to feel it. This couldn’t happen, this monster rising from the horizon and smashing what it doesn’t burn. Yet it already had happened. The monster was still out there, and everyone knew it, as they waited for it to kill again.

Tomorrow, our Godzilla discussion continues with a staff forum considering the film’s place in monster-movie history (and history in general) and its key themes. And on Thursday, Noel Murray takes a look at the very British Godzilla knock-off Gorgo.