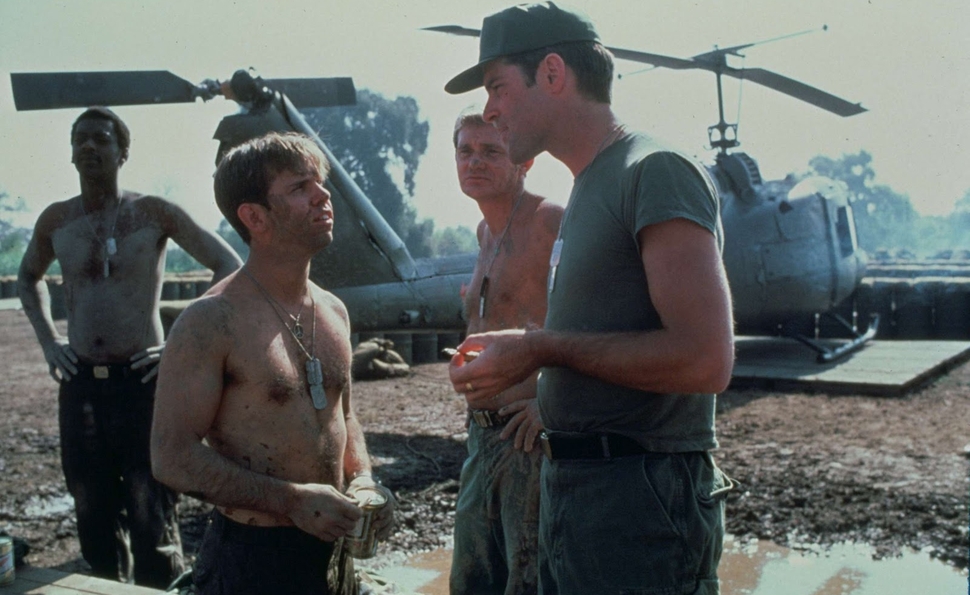 “Where were you in ’62?” the tagline for American Graffiti famously inquired, seemingly secure in the knowledge that for most audiences, the answer would be substantially different than where they were in 1973, when the film came out. From the vantage point of 1973, 1962 must have seemed like ancient history, a bygone era already well on its way to being mythologized as a golden age of hope and optimism, our very own Camelot.

American Graffiti’s tagline suggested that to the audiences of 1973, 1962 wasn’t the recent past, but rather ancient history. It could do this because so much had elapsed, culturally and politically, between the time American Graffiti took place and the time it was released. President Kennedy, the golden figurehead of Camelot, was assassinated, as was his brother Robert and Martin Luther King Jr. The sexual revolution, the Vietnam War, the Civil Rights Act of 1964, the rise of Black Power and women’s liberation, legalized abortion, The Beatles, Bob Dylan going electric, The British Invasion, and the election and re-election of Richard Nixon had all transpired between 1962 and 1973. The world could legitimately be said to be a much different place than it was even 11 years earlier. People saw the world and their place in it differently.

American Graffiti is nostalgic for an age of cultural consensus that had already begun fracturing in 1962. But it’s equally nostalgic for the cultural consensus of high school, the way that shared crucible unites people who otherwise might have nothing in common. The leads in American Graffiti are an eclectic bunch, including a brain (Richard Dreyfuss’ Curt Henderson), a square (Ron Howard’s white-bread Steve Bolander), a nerd (Charles Martin Smith’s Terry The Toad), and a greaser wracked by self-doubt (Paul Le Mat’s John Milner). They have radically different interests and goals, but they’re united by age and by a series of beloved rituals, primarily cruising and its never-ending hunt for sex, booze, and excitement.

The implicit acknowledgment that an era is rapidly drawing to a close, whether its principals realize it or not, lends a distinctly melancholy air to American Graffiti that turns bracing and tragic during end credits that coldly inform us that John, the would-be James Dean we’ve been tagging along after for 112 minutes, was killed by a drunk driver in 1964, Toad was reported missing in action in Vietnam in 1965, and Steve has become an insurance agent in Modesto, California, perhaps a fate worse than death. Only Curt, the brainy romantic, seems to have made it out okay, though the end credits suggest, without explicitly saying so, that he’s currently living in Canada to avoid the draft.

The “Where Are They Now” segment of American Graffiti would seem to preclude a sequel. We don’t need to know what happened next: We’re told what happened to the film’s four main characters in a way that’s bracing, ballsy, and impressively unsentimental. American Graffiti is obviously near and dear to George Lucas’ heart, and rooted in his adolescence as a car-crazed kid, but it views its characters from an anthropological distance all the same. This holds true of the epilogue as well, which relays the news of Milner’s death with chilly finality. It’s almost as if by killing off one of his main characters, and sending another one M.I.A., Lucas was closing the door definitively on the prospect of a sequel, for himself, or for anyone else. But that didn’t keep Hollywood from pursuing one all the same.

There are many reasons why 1979’s More American Graffiti shouldn’t exist, but there are just as many reasons why it should. For starters, an American Graffiti  sequel would afford an opportunity to address the way society had shifted in the years between 1962 and 1973, and to do so in a way that reflected the adventurousness and risk-taking that still characterized New Hollywood even after Lucas’ follow-up, Star Wars, helped usher in the blockbuster era. Beyond extending the narratives of a group of beloved, well-defined characters, a sequel to American Graffiti could comment on both how the 1960s changed America and how the 1970s changed the look and feel of American film. If American Graffiti was The Beatles on The Ed Sullivan Show, all fresh-faced and bursting with youthful innocence, More American Graffiti—which Lucas executive-produced through his Lucasfilm production company—is The White Album. It’s ambitious, drug-infused, psychedelic, and fractured in strange and interesting ways. 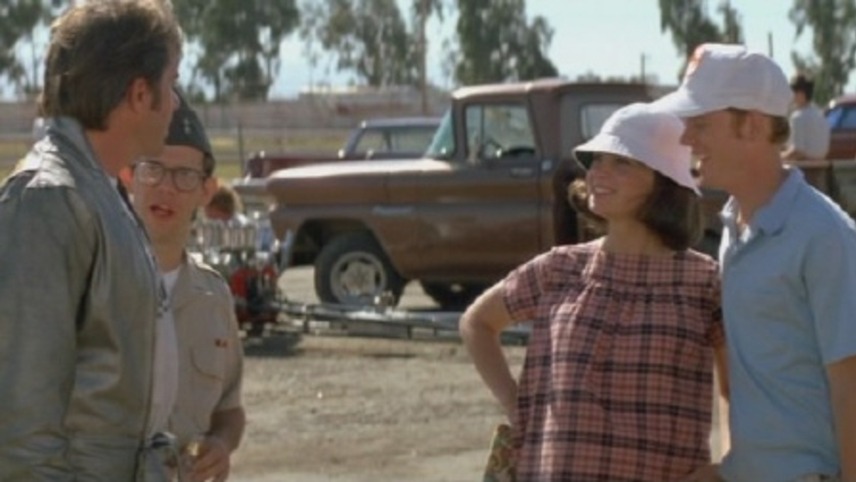 In one timeline, poor, doomed John Milner, whom we know from the first frame will not make it to the last, is trying to establish himself as a professional race-car driver while simultaneously hitting on a hot European foreign-exchange student, a quest complicated by her ignorance of English.

In the next timeline, Toad is in Vietnam, desperate to get out of doing his patriotic duty. In pop culture, geeks are generally a meek and self-negating lot, but part of what makes Toad such a great character is that he’s so puffed up with unearned cockiness and aggression. He’s like a spirited little puppy who doesn’t know he’s not supposed to play with the big dogs. In American Graffiti, that unearned cockiness took the form of trying to score with a woman way out of his league. Here, it takes the form of Toad waging a one-man verbal war on his superiors in an effort to be so disruptive and irritating that his bosses have no choice but to send him home. Toad’s effrontery is played for laughs, but these segments carry a bracingly bleak undercurrent, since we spend much of the film in the strange, uncomfortable position of waiting for Toad’s death. Every darkly comic slapstick setpiece seems to bring him closer to his seemingly inevitable demise.

Richard Dreyfuss was the only major cast member not to return for More, so the 1966 timeline centers on Candy Clark’s Debbie Dunham. As the film opens, she’s traded in her days as a high-school good-time girl for a life as the long-suffering girlfriend of a groovy musician who isn’t too into the whole “marriage” bag or the “treating women with respect” kick. So Debbie finds herself ambling and rambling across the San Francisco hippie scene before hooking up with a long-haired rock ’n’ roll band, led by a young Scott Glenn, whose flirtations with country audiences call to mind Sweetheart Of The Rodeo-era The Byrds. 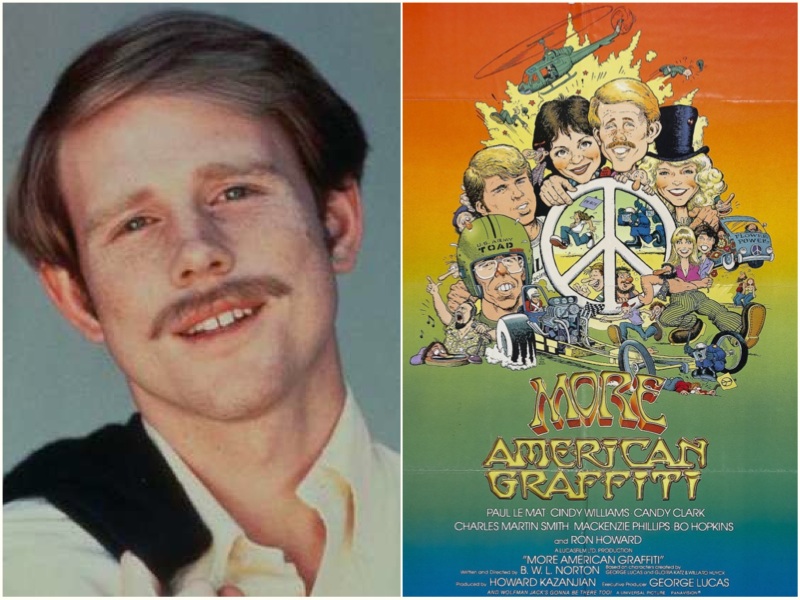 Finally, Ron Howard and Cindy Williams return as Steve and Laurie Bolander, only now they are a Modesto couple whose tense marriage threatens to shatter when Laurie attempts to get a job and Steve demands she stay at home and be a ’50s-style mother and housewife. An enraged Laurie storms out and accidentally finds herself on the front lines of a Vietnam protest alongside long-hairs and hippie freaks who don’t share her rock-ribbed respect for the leaders of our fine nation.

More American Graffiti doesn’t just break up the gang into four discrete units; it damn near breaks up the gang into four different films, each with a  unique visual style. (Although there is some overlap, and some characters from the first film pop in for cameos, like Harrison Ford’s Bob Falfa, now an asshole motorcycle cop, and Mackenzie Phillips’ Carol, now a hippie living in a commune.) The Vietnam sequences are shot on 16mm to give them the look of grainy, grungy home movies. The segment devoted to Debbie’s amble to self-discovery is filmed like a trippy late-’60s counterculture stoner film, complete with split-screens upon split-screens upon split-screens, which writer-director Bill L. Norton uses to flood audiences with more information than they’re able to process. This lends the film an air of pleasant disorientation not unlike what Debbie’s experiencing as she tries to find her errant boyfriend, and herself.

More American Graffiti plays like a drive-in theater simultaneously running a light-hearted drag-racing exploitation movie, a dark, satirical war comedy in the M*A*S*H vein, a swinging rock comedy about the wild and wooly counterculture, and a satirical comedy about the culture-clash collision between squares and long-haired hippie freaks. These disparate films don’t always come together organically, but that’s kind of the point: More American Graffiti is about the fracturing of a culture, and the simultaneously exciting and terrifying freedom of that splintering.

More American Graffiti’s visual style differs so dramatically from its predecessor’s that it’s easy to overlook the two films’ commonalities—though the passage of time lends these scenes an added kick. Laurie and Steve, for example, spend More American Graffiti fighting and breaking up and then making up, but since children and careers and families are now on the line, the stakes are a whole lot higher. This isn’t the class president seeing what he can get away with and still keep the cute cheerleader when he’s away at college; this is a real, justified conflict that has the power to destroy an entire family.

This darkening and deepening of the themes and characters from the earlier film is reflected in the way Norton chooses to open the film: with stoned mumbling giving way to a long shot of helicopters in Vietnam against the majestic backdrop of Martha And The Vandellas’ “Heat Wave.” The film is still juxtaposing pop music and vehicles, only this time the context is a whole lot more ominous, in keeping with the more grown-up tone. It’s a sequence that calls to mind Apocalypse Now—a film that began its curious existence as a directorial vehicle for Lucas—more than American Graffiti.

The default strategy for sequels is to crank them out as quickly as possible, to capitalize on the initial film’s heat and give audiences more of what they loved about the first film. So it’s ironic that this ambitious, audacious, and accomplished film so dedicated to subverting expectations and taking bold chances is today remembered largely for being even more unnecessary than most sequels, and for having the most unimaginative title imaginable. As we gear up for the culture-wide explosion that is the next set of Star Wars movies, it’s instructive to look back at the way More American Graffiti took beloved characters from the George Lucas universe and spun them into different and intriguing new worlds. More American Graffiti shows all that can be accomplished, creatively speaking, when you take huge artistic chances and mess with a winning formula. It will be fascinating to see if the upcoming Star Wars sequels will be bold enough to follow suit and risk alienating one of the most obsessively devoted fan bases in pop culture. (More American Graffiti, at the very least, did not have people dressed up like Bob Falfa or Wolfman Jack waiting in line for tickets for weeks before the film opened.) Heaven knows how the next batch of Star Wars movies will turn out—though it’s a safe bet they will take place in outer space—but it’s encouraging that the next one will not be titled simply, and a little deceptively, More Star Wars. In that respect, at least, Lucas seems to have learned from his mistakes.