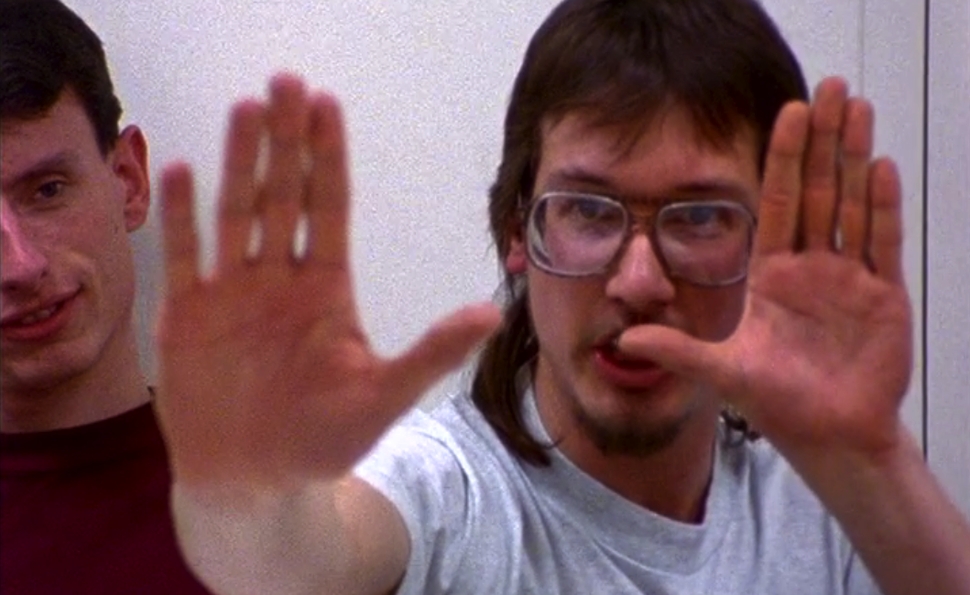 Keynote: American Movie and the power of dreaming

Chris Smith’s 1999 documentary American Movie opens with the words, “I was a failure,” delivered via voiceover by aspiring filmmaker Mark Borchardt, as he drives across a long, grey expanse of Milwaukee’s Northwest side. Borchardt continues, in a voice quivering with emotion, world-weariness, and stubborn dedication:

I was a failure, and I’d get very sad and depressed about it, and I can’t be that no more. Because I really feel like I betrayed myself, big-time. Because I know when I was growing up, I had all the potential in the world, and now I’m back to being Mark who has a beer in his hand and is thinking about the great American script and the great American movie. And this time I cannot fail, I won’t fail, it’s not in me. You don’t get second chances and mess them up. You’d be a fool to, not just finishing films, or in the long run, getting some money, but it’s right now, I feel like, it’s like I said, five, 10, 15 years ago, now I’ve got the same options again, and this time, I’m not going to fail. This time it’s most important not to fail, just to drink and dream, but rather to create and complete.

Yet it’s apparent that failure is Borchardt’s birthright, that it’s sewn into the fabric of his sorrowful existence maintaining a cemetery and delivering newspapers, like a real-life version of Chris Elliott’s character in Get A Life, as he pursues the quixotic goal of becoming the next George Romero. American Movie is a movie about failure. It’s written right into the film’s seldom-employed subtitle: The Making Of Northwestern, referring to the autobiographical passion project Borchardt began years earlier, but was forced to abandon due to lack of funding.

On one level, American Movie is indeed about the making of Northwestern, or at least about the endless pre-production and aborted stops and starts of Northwestern. But American Movie is more about the idea of Northwestern than its actual creation. And, in the literal sense, it’s more about the making of “Coven,” the black-and-white, direct-to-video short horror film Borchardt made in 1997 to raise the funds for his longer project. Borchardt is such an impossible dreamer that he needs to realize more than one impossible dream—not just making “Coven,” but making it a sizable financial success, despite the virtually nonexistent market for low-budget, direct-to-video short films populated by unknowns—in order to even have a shot at realizing an even crazier, even more impossible dream. Yet even Borchardt seems to realize that Northwestern is more powerful as a dream that can never be realized than as an actual feature film that might have a clumsy third act, bad lighting, a stilted lead performance, muffled sound, or any of the many flaws actual films usually possess.

In American Movie, Borchardt’s failure most often assumes the shape of a beer bottle. In the opening monologue, he draws a clear dichotomy between the Mark who drinks and dreams, and the Mark who creates and completes. Completion is of central importance to American Movie and to Borchardt. It’s what separates aspiring filmmakers from the real thing, people who talk about wanting to make movies and people who make them. That’s the gulf Borchardt is eager to finally cross.

Borchardt clearly is a whiz at drinking, dreaming, and creating. It’s the primal satisfaction of completion that escapes him. In that regard, alcohol serves a tricky dual purpose for Borchardt: It helps him escape the grubby despair of his day-to-day life and dream, but it also keeps him from realizing his ambition.

Making it even trickier: Drinking is the theme of both the never-to-be-finished Northwestern and “Coven.” Borchardt’s talk of Northwestern is heavy on broad strokes and short on specifics, but from his descriptions, Northwestern appears to be a Western in which the roles of guns and horses are replaced by alcohol—or, alternately, a coming-of-age movie about a breed of young Milwaukeean whose entire culture revolves around drinking: in bars, cars, alleyways, bathroom stalls, or any other place someone can steal a sip of rotgut or peppermint schnapps. Northwestern could be Borchardt’s Outsiders or Barfly, or his cinematic Catcher In The Rye, but whether it’s a meditation on drinking, a movie about drinking, or simply a movie inspired by drinking, alcohol is clearly of central importance to the narrative.

American Movie suggests it might be necessary for Borchardt to quit drinking to have the focus and responsibility to make his film about drinking. Quitting drugs and alcohol seems to have given Borchardt’s best friend, Mike Schank, an almost Buddha-like calm. With his serene smile, gentle nature, and virtuoso guitar playing, Schank is a quietly effective billboard for sobriety and 12-step programs, but Borchardt seems to see sobriety as just another compromise on the road to becoming a soulless, robotic automaton like his siblings. In his opening monologue, Borchardt explicitly links drinking and dreaming. He seems justifiably afraid that without alcohol to distort his perception and boost his confidence, he’d have a harder time dreaming the dreams that make life bearable.

Yet to Borchardt’s brothers, his dreams of being a big-time filmmaker render him insufferable: They see him as a braggart whose only real asset is his mouth, and whose talents would be better as a factory worker. To Borchardt, fulfilling the role his family and society envision for him is tantamount to spiritual death. And as someone who works in a cemetery, he’s all too aware that society doesn’t stop dividing people into winners and losers even after they die.

Borchardt sees life in the absolutes of his opening monologue: crushing failure or astonishing success, with little between. He’s either going to make the great American movie out of the great American script, or he’s going to be that 60-year-old with a beer in his hand, talking about what might have been. Those seem to be the only futures he can envision.

American Movie has been accused of laughing at its subjects’ expense, and while there’s something to that criticism, the film portrays Borchardt both as the world sees him and as he sees himself. American Movie’s unusual intimacy lets the audience see Borchardt’s dreams from the inside, to feel them nearly as acutely as he does. Smith gets close enough to Borchardt to get sucked in by his drive, and to see the beauty and nobility of his striving, relentless ambition, regardless of the eventual outcome. American Movie knows and understands its subject deeply, and loves him all the same.

American Movie was filmed less than 20 years ago, but it already seems to belong to a far-ago era, when movies were shot on expensive, mercurial film stock and edited by hand, and special effects were lovingly handmade. (If “Coven” were made today, it’d probably be ruined with slick digital effects and an uncannily convincing CGI version of Uncle Bill.) American Movie isn’t above pointing out that its subject doesn’t know how to pronounce the title of his own movie, but it’s also clearly in awe of the incredible will required to convince a group of strangers to agree to terrible working conditions and zero money for the sake of being part of someone else’s insane dream.

In American Movie, Borchardt emerges as an unexpectedly inspirational figure, a man willing to clean human feces off the wall in a cemetery washroom rather than compromise. That’s both admirable and a little insane. Borchardt may never achieve his dream of becoming a great filmmaker, but American Movie establishes just what a remarkable achievement it is to make a movie at all, even a short. 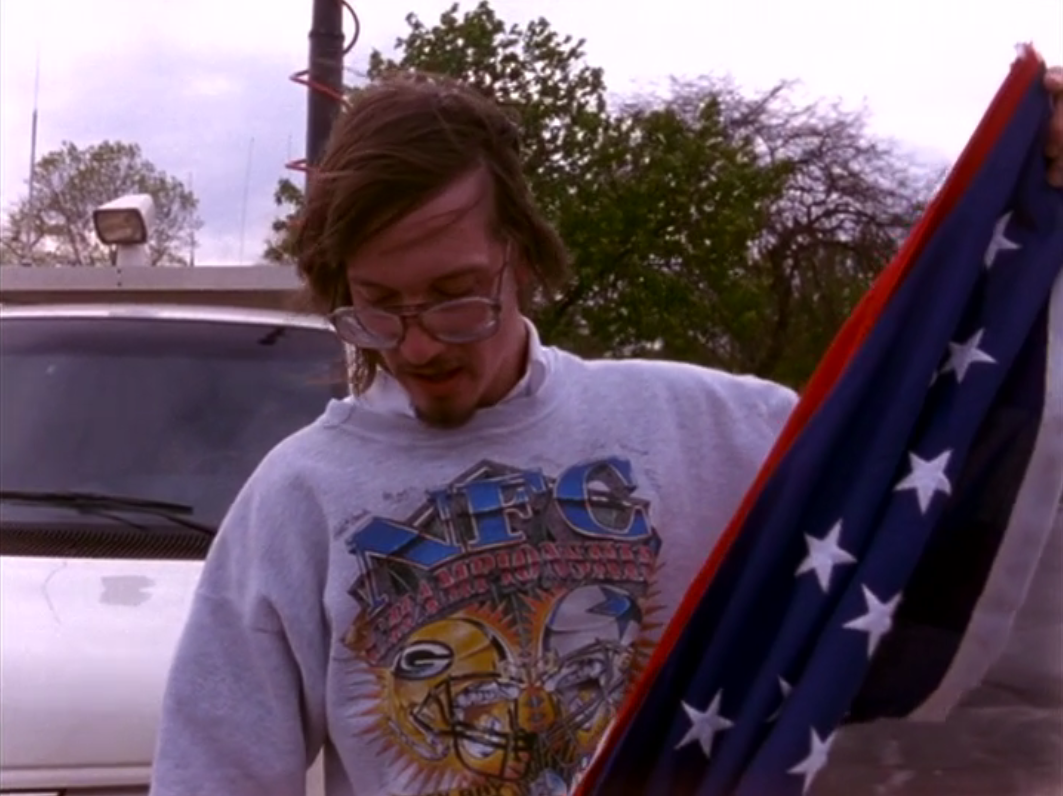 Borchardt is blessed to be surrounded by people who believe in him, in blatant defiance of common sense—like Schank, whose sweetness and irrepressible optimism help keep the film from turning impossibly grim. American Movie is about a man, and a troupe of filmmakers, but it’s also a buddy comedy about two outsiders who find something essential and life-affirming in their friendship, even after one chose sobriety while the other continued down the path of bleary excess.

That faith in Borchardt’s future as a filmmaker might be delusional, but it isn’t entirely unwarranted. Borchardt’s gift is his ability to make the world seem as exciting and filled with possibilities as the movies he mainlines. To everyone else, Borchardt’s ancient Uncle Bill might be a weird, sad old man with a William S. Burroughs-like croak, waiting around to die in a shabby old trailer, despite a life savings approaching $300,000. To Borchardt, Bill is a glamorous movie producer backing the hottest young talent in years, a Wisconsin Harvey Weinstein putting his money behind a Midwestern Quentin Tarantino. Is it any wonder Borchardt would rather live in his fantasy world than confront reality? It’s a lot nicer there.

I happened to rewatch Ed Wood and read Greg Sestero and Tom Bissell’s wonderful book The Disaster Artist—about the making of Tommy Wiseau’s The Room—around the time I rewatched American Movie, and I was struck by the commonalities of the three projects, which are all tributes to the miracle of creation and the art of collaboration. Much of the humor and pathos in American Movie, and in Ed Wood and The Disaster Artist, lies in watching a group of seemingly sane and rational human beings attempt to realize the creative vision of a charismatic lunatic.

Like The Disaster Artist and Ed Wood, American Movie ends with a motley crew of misfits and oddballs attending the première of their big production. But it’s notable that American Movie doesn’t end with the première of Northwestern, a film that did not exist at the time, and still does not. Instead, the film ends with the première of “Coven,” the movie Borchardt made to get the money to make the movie he really wanted to make. So even in its moment of ultimate triumph, American Movie is about a man who is still a long way from where he wants to be, and very well may never get there, with a beer in his hand or otherwise. That’s appropriate, since the film is ultimately less concerned with succeeding than with having the audacity to dream, and the dedication to pursue that dream even when it veers into madness.

Our look at American Movie continues tomorrow with a staff Forum on the film’s style, its view of The American Dream, movies about moviemaking, and more. On Thursday, Tasha Robinson talks to director Chris Smith about how the film looks to him 15 years later, and how it affected his career.