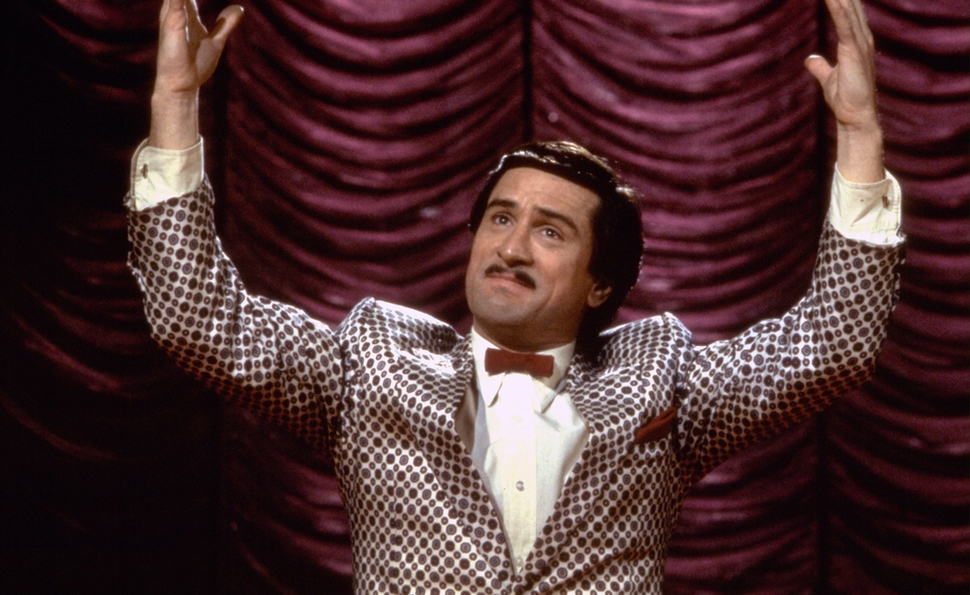 Martin Scorsese’s The Color Of Money opens with a brief voiceover narration, read by Scorsese himself:

Nine-ball is rotation pool. The balls are pocketed in numbered order. The only ball that means anything, that wins it, is the nine. Now, the player can shoot eight trick shots in a row, blow the nine, and lose. On the other hand, the player can get the nine in on the break, if the balls spread right, and win. Which is to say, that luck plays a part in nine-ball. But for some players, luck itself is an art.

Scorsese leaves out a third possible nine-ball outcome: The player can perform badly, miss shot after shot, and still win, provided he sinks that one all-important ball. It’s a interesting omission, since that particular structure—a string of screw-ups followed by an unearned victory—sounds exactly like the structure of a Martin Scorsese movie, where characters are routinely rewarded for their faults.

Consider, for example, Scorsese’s 1983 film The King Of Comedy. Its “hero,” 34-year-old Rupert Pupkin (Robert De Niro), is a delusional fame-whore, a dreadful conversationalist, and a mediocre stand-up comedian with hackneyed material. After kidnapping his idol, late-night talk-show host Jerry Langford (Jerry Lewis), Rupert gets sent to prison—but only briefly. When he emerges after serving two years and nine months of a six-year sentence, Rupert is a bestselling author, a huge celebrity, and an enormous folk hero. At the conclusion of his stand-up set on The Jerry Langford Show, a forcible booking he kidnapped Jerry to secure, Rupert explains his motives. “I figure it this way,” he says to the studio audience, “Better to be king for a night than schmuck for a lifetime.” But Rupert doesn’t return to the land of the schmucks after the Langford Show. He remains among the kings.

Some King Of Comedy viewers argue that these scenes are delusions taking place only in Rupert’s mind, and there is evidence to support their claim. The entire film frequently slips in and out of Rupert’s imagination as he envisions himself as a guest on The Jerry Langford Show, or as Jerry’s dinner guest at Sardi’s, where he fends off autograph-seekers and Jerry’s attempts to book Rupert as a stand-in host.

Even before the movie slips conclusively into madness, the film’s tether to reality seems tenuous at best. From the first scene, where Rupert rescues Jerry from a crowd of needy gawkers, The King Of Comedy plays like a stalker’s fantasy. Using a diversion engineered by his friend and fellow obsessive Masha (Sandra Bernhard), Rupert sneaks into Jerry’s limo just as it pulls away from his television studio. But rather than tossing Rupert out or threatening to press charges, Jerry actually listens to the would-be comic’s pitch, and even offers some advice and encouragement. “I think you get over the initial shyness, you’re gonna be okay,” he suggests, before adding, “I hope it works out for you, Rupert.” Later, when Rupert shows up unannounced and uninvited at Jerry’s country home, the host once again confronts and dismisses Rupert when he could easily have him arrested. 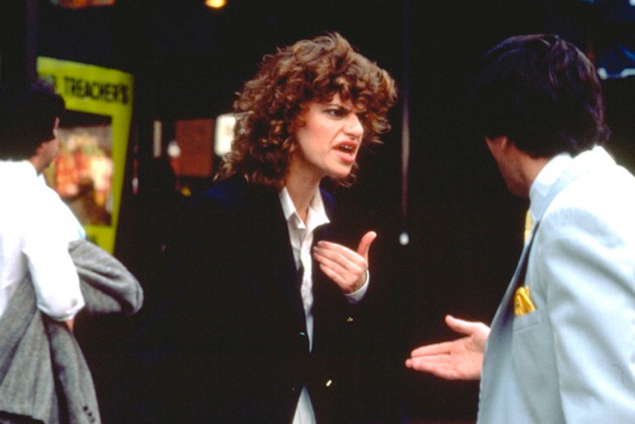 These and other sequences seem too good to be true, and suggest The King Of Comedy has no base level of reality. For his part, Scorsese leaves certain aspects, like Rupert’s mother, teasingly ambiguous. We hear Rupert’s mom, whom he seems to live with, yelling down to him in his basement apartment, but we never see her on camera. (She’s voiced by Scorsese’s mother, Catherine.) In one scene with Masha, Rupert complains about not being able to pay his rent; during his set on The Jerry Langford Show, he cracks a joke about his mother being dead for nine years. So which is it? Is Rupert a stereotypical-but-harmless nerd living in his mom’s basement, or a truly insane sociopath carrying on conversations with the voices in his head, à la Psycho’s Norman Bates?

Both options seem equally plausible, because we get to know so little about Rupert beyond his comedic ambitions. Maybe that’s because there’s nothing to him beyond those ambitions. Rupert is always dressed in sharp suits for the camera, and speaks only in TV-friendly anecdotes and a phony, singsong-y cadence honed through years of observant viewership and limited interaction with actual human beings. Near the end of the movie, it’s revealed that Rupert’s bestselling memoir, King For A Night, has been optioned for a movie. At times, The King Of Comedy feels like that adaptation—drawn entirely from Rupert’s skewed, demented perspective.

In fact, the film was based on a screenplay by Newsweek critic Paul D. Zimmerman, who was inspired by “an article in Esquire about a man who kept a diary in which he assessed each Johnny Carson show: ‘Johnny disappointed me tonight,’ he would write. The talk shows were the biggest shows on television at the time. I started to think about connections between autograph-hunters and assassins. Both stalked the famous—one with a pen and one with a gun.” Zimmerman wrote his early drafts in the mid-1970s and initially partnered with director Milos Forman, but after Forman dropped out of the project, Zimmerman sent it to Scorsese. He passed it on to De Niro, who loved it, and by the early 1980s, the duo selected it as their follow-up to Raging Bull.

Given the drastic shift in tone, style, and subject from their previous pairings, it isn’t shocking that The King Of Comedy was largely dismissed by audiences and critics on its initial release. (The film made just $2.5 million in theaters, barely 10 percent of Raging Bull’s grosses three years earlier.) But the years have been kind to The King Of Comedy, which anticipated society’s increasing obsession with celebrity, the breakdown of the distinction between fame and infamy, and the public’s insatiable hunger for instant stardom without hard work or talent. Its ending must have looked ludicrous in 1983. Now, it seems more plausible.

Most essays and reviews about The King Of Comedy note that in spite of its title, the film isn’t actually funny. It’s probably more accurate to say that it doesn’t have any actual jokes; some of the gags are so subtle, they’re almost invisible. Note, for example, Scorsese’s hilarious framing of a “Chock Full O’ Nuts” sign behind Rupert and Masha when they’re kicked out of Jerry Langford’s office in Paramount Plaza, so that it quietly comments on the characters’ unhinged mental states. The fact that these two idiots kidnap Jerry in Masha’s car—which has a “MASHA” vanity license plate—always cracks me up as well.

If The King Of Comedy doesn’t make us laugh that hard, maybe that’s because, like so many Scorsese movies, the ultimate joke is on the audience. In Taxi Driver, De Niro’s Travis Bickle, a sexually frustrated, sociopathic hack, snaps and goes on a killing spree—and becomes a folk hero (both in the movie and in real life, to would-be assassins like John Hinckley Jr.). In Goodfellas, Ray Liotta’s Henry Hill spends a lifetime robbing and hurting people, and feels absolutely no remorse about any of it. He only turns himself in because he fears his friends are going to whack him. For the millions he took and squandered, he’s “punished” with a quiet life in suburbia. In The Wolf Of Wall Street, unscrupulous stock trader Jordan Belfort gets busted for his crimes—but, as he proudly boasts in his voiceover narration, getting busted doesn’t stop him from being rich, and after a slap on the wrist, he’s back to giving motivational seminars to people who lap up his every word.

The Wolf Of Wall Street ends with a shot of Belfort’s audience looking up in rapt attention. The King Of Comedy ends with that shot’s inverse: Rupert Pupkin, freshly released from prison and back onstage, soaking in the adulation of his fans. As the audience cheers and applauds, the camera slowly zooms in on De Niro, who’s dressed in bright red suit and bowtie, like Satan’s personal stand-up comic. In Scorsese’s “nine-ball movies,” he presents villains who are mistaken for heroes, who repeatedly fail upward and still come out on top. Scorsese never lets these characters off the hook. His audience does.

Tomorrow, our Movie Of The Week Forum debates King Of Comedy’s slippery approach to humor, celebrity, and mental illness. Then on Thursday, Sandra Bernhard talks about making the film and what she thinks about its take on celebrity now.