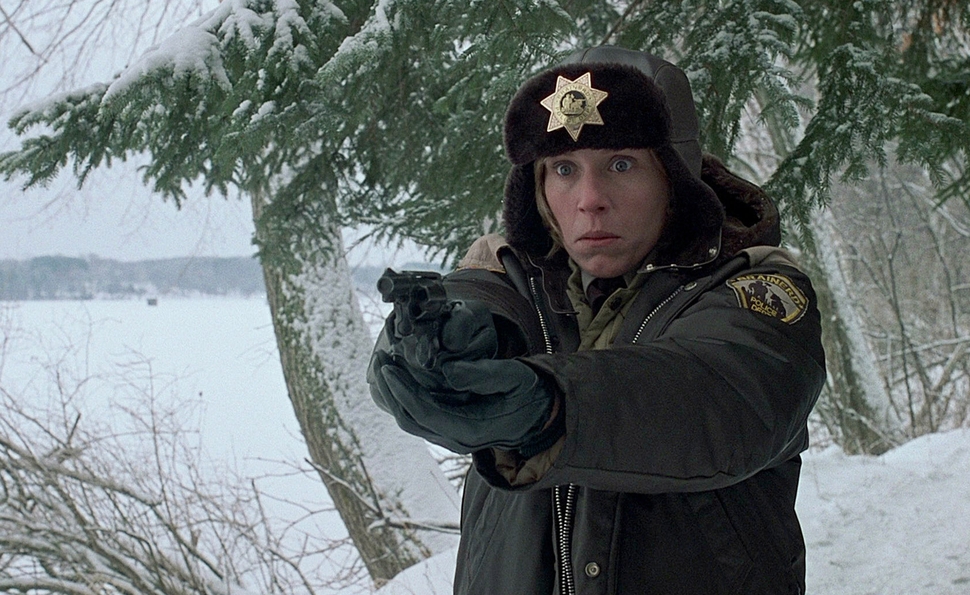 Keynote: The many faces of Fargo’s Minnesota, in five quotes

“Minnesota nice” refers to a regional form of passive-aggression that hides hostility and malice under the guise of homey Midwesternisms, but in Joel and Ethan Coen’s Fargo, the term is considerably more expansive. As native Minnesotans, the Coens are seeking to capture the essence of the place, but they’re working here as genre filmmakers, not cultural anthropologists, so everything is rendered through the distorting lens of film noir. Fargo’s relationship to the “real” Minnesota has been central to the debate over the film ever since its 1996 release, especially its stylized take on the region’s Scandinavian roots, which comes out in names like Lundegaard and Gunderson, and dialogue sprinkled with lingual tics like “Oh, yah?” and “Geez.” There are moments observed with an absolute specificity of detail—the scraping of an iced-over car window as the ultimate in Midwest existential despair—and others that are cartoonish, even cruel, in laying out the banal rituals of buffet lines and needlepoint. Yet the Minnesota of Fargo reflects the Coens’ ambivalence about their home state rather than blanketing it strictly in contempt or affection; this is a place where decency and venality co-exist like anywhere else, and where the coded language can be authentically nice, as well as “Minnesota nice.” The film contains legions, and since it’s arguably the most quotable Coen brothers effort outside The Big Lebowski, I’ll illustrate their Minnesota in five quotes: 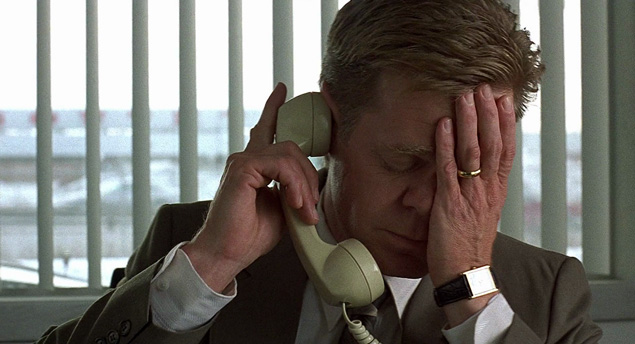 “Well, we’ve never done this before. But seeing as it’s special circumstances and all, he says I can knock a hundred dollars off that Trucoat.”

Meet Jerry Lundegaard (William H. Macy), the executive sales manager at an Oldsmobile dealership in Minneapolis. His father-in-law, Wade (Harve Presnell), owns the place, and Jerry makes a decent living, enough to keep up a suburban two-story with his wife and son, though it seems likely he’s indebted to Wade for a piece of that property, too. Twice in Fargo, Jerry refers to himself as the “executive sales manager”—the second time with a pitiful squeak—but it’s one of those meaningless titles given to salesmen to make them sound more important than they are. Jerry still has a boss, who’s busy slurping soda and watching a Gophers game as Jerry flounders with an irate customer, making a show of asking his supervisor to salve a raw deal. The customer didn’t want the Trucoat sealant—nobody wants the sealant—and Jerry absorbs his anger like a fetid sponge, utterly defeated, perhaps feeling that the man has correctly assessed his character.

We know Jerry is a scoundrel, too, someone whose half-wit scheme for “a little bit of money” sets into a motion a bloody sequence of events that leads to seven deaths and robs a young accordion enthusiast of his mother. And yet Jerry is an Everyman, a Midwest middle-manager type who wants a little more from his life, and who can’t identify with that? He’s one of the most pitiful creatures in crime-movie history: From the first scene with his co-conspirators, Carl Showalter (Steve Buscemi) and Gaear Grimsrud (Peter Stormare), he has no control over a dicey plan to have his wife Jean (Kristin Rudrüd) kidnapped for his father-in-law’s ransom money, and even the sweetener of the deal, a Cutlass Ciera, has tags that lead right back to him. Beyond that, there’s the daily humiliation of Wade undercutting him as a provider and a man (“Jean and Scotty never have to worry”), the bellowing of ripped-off customers, and that goddamn ice on the car windows. To paraphrase The Big Lebowski, Jerry is the man for his time and place. He fits right in there. 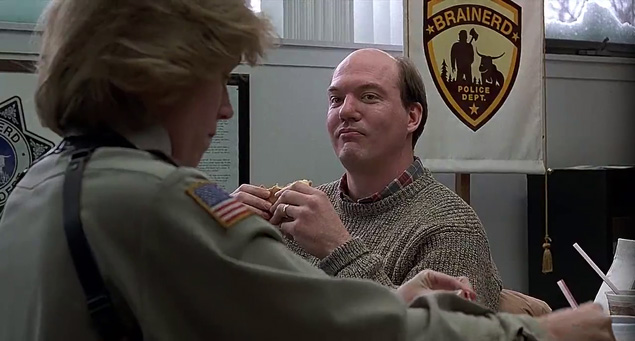 That’s Norm “son of a” Gunderson and his pregnant wife Marge (Frances McDormand) feasting on chicken, gravy, and other comfort food laid out in a brown-ish array at some grim restaurant in small-town Brainerd. Marge has landed the case of a lifetime—a state trooper and two passersby dead off the highway—and her instincts prove impeccable, certainly more than might be expected of a backwater police chief who doesn’t see much action. Her talents engender a little restlessness, too—her trip to the Twin Cities reveals a want for more that isn’t entirely different from Jerry’s—but for now, she’s happily eating for two. Out in Brainerd, a drive north from Minneapolis, the “Oh yah?”s and other Scandinavian tics are the buzz of public discourse, to the point where Brainerd seems like some combination of the Midwest and a country unto itself. It’s a friendly place, enough to let Marge to speculate with great certainty that the perpetrators of these murders were from out of town.

And yet Brainerd is an insular place, too, walled in by vast stretches of snow-caked tundra and a manner of speaking that sets its residents apart from the rest of the world. When Carl and Gaear come blazing through the area, finally landing at a cottage on nearby Mille Lacs, a lake east of the city, they’re a conspicuous pair in many ways, but mostly because they don’t speak the language—morally or literally. Carl is just a “funny-looking guy”—in a general kinda way—and he doesn’t belong in towns like Brainerd and the like, which may speak to the inhabitants’ basic decency, but also to their narrowness and limitation. Marge speaks the language, but cannily: She’s the cheery interrogator who can seem like a pushover or a rube, but keeps asking all the right questions. She likes the fricassee and Arby’s lunches Norm brings into the office, but there lingers a faint note of dissatisfaction, like maybe she deserves better than the sweet oaf who paints mallards for stamp contests, or the dim partner who doesn’t realize that the “DLR” on the getaway car stands for dealer plates. 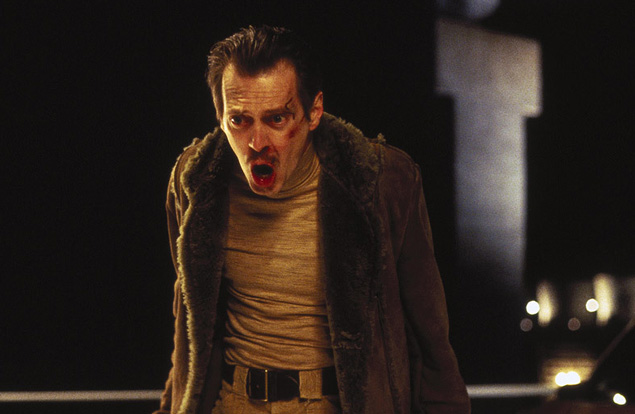 “You know, these are the limits of your life, man! The rule of your little fuckin’ gate here! Here’s your $4, you pathetic piece of shit.”

Carl Showalter has decided not to park here. He isn’t taking the flight he made up, as it happens, so he surely doesn’t need to pay the fee. But “King Clip-on,” the maniacally cheery attendant, tells him the minimum charge for long-term parking is $4, and no amount of rationalization is going to change his mind. The next guy who tries to charge Carl a minimum fee winds up dead, but this one just looks baffled that Carl has opted to leave, and doubly baffled that there’s any negotiation over the $4. His job is to apply the same standards to every customer—in that respect, he’s like the automated machines that will eventually replace him—and Carl misreads it as a power trip, when in fact it’s a simple guy performing a simple task. These are the limits of the attendant’s world, no doubt, and they might seem pathetic to a comparatively worldly guy like Carl—or the audience—but he also isn’t coloring outside the lines. He isn’t capable of the horrors perpetrated by a guy like Jerry, who tries to expand the limits of his world by breaking the rules, and is powerless to make sure it’s a “no-rough-stuff kind of deal.”

Bit players like King Clip-on, the local hookers who service Carl and Gaear, or the diner cashier who tilts her head dumbly at Jerry after he pays the bill have fueled the argument that Fargo, for all its virtues, suffers because of its condescension. The Coens, by this line of thinking, are asking the audience to chuckle smugly at Minnesota yahoos, in much the same way they chuckled at the trailer-trash denizens in Raising Arizona. There are lapses in the film where those charges stick—that head tilt is the standout for me, but others have a longer list of misgivings—but the Coens’ Minnesota, in addition to being abstracted as a genre film spiked with black comedy, resists such a narrow reading. To an extent, they are making fun of the rubes, and they do have a measure of Carl’s contempt for their rigidity, but the Marge Gunderson character alone offers a counterargument, revealing a depth of feeling toward people who live on the straight and narrow. The attitude of the film is ambivalent, and it’s richer for it. 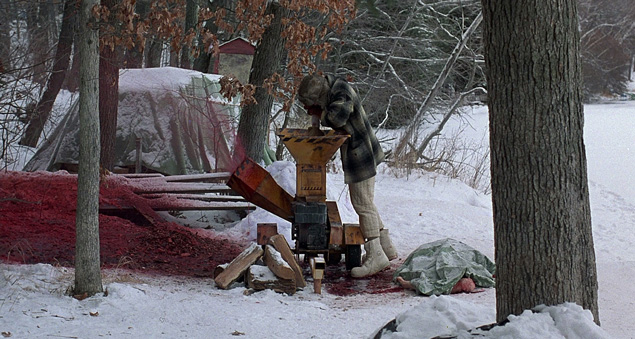 “And here ya are, and it’s a beautiful day.”

Now we come to the film’s great and final monologue, where Marge takes stock of all the carnage she’s witnessed as a result of this dumb scheme, and lectures Gaear as he sits ever-silent in the back of her cruiser, blankly fielding her rhetorical questions. It’s a button to that scene where Marge, fighting morning sickness, pieces together the beginnings of a crime spree, and now, with Carl in the woodchipper and Jean dead on a cottage floor, has ably pieced together the end of it, too. The Coens have explored morality over and over in their careers, but never as explicitly as they do in this scene, which would be too on-the-nose if Marge’s words weren’t so powerful and true, or McDormand’s delivery so infused with a combination of emotion and disbelief. We all recoil at “unspeakable” tragedies when they pop up in the news, but with the case closed, Marge’s intimacy with that kind of evil finally leaves a mark. The lesson, “There’s more to life than a little money” has been reinforced for her through this experience, but despite her investigative prowess, the crimes she encounters are fundamentally inexplicable. Today, the sun is shining on her arid little cocoon in northern Minnesota, and she’ll need to bunker in again to recuperate. 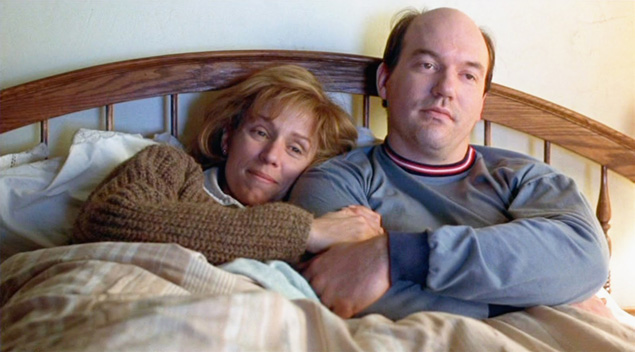 Marge’s story is bookended by two scenes of such surpassing sweetness that they make living in the punishing wintry isolation of Brainerd look like a domestic idyll. After an early-morning wake-up call that dispatches Marge to the scene by the highway, there’s Norm dragging himself out of bed to make his wife some eggs and give her police prowler a jump. And when it’s all over, the two of them are back in their little house, nice and toasty, with Marge offering Norm reassurance after his painting was only selected for the 3-cent stamp. For these rural Midwesterners, it’s a cold landscape out there, literally and figuratively, and their partnership is a shelter of radiant heat. “Two more months,” they say to each other in the film’s last lines. Two more months until they bring another life into the world, and Marge can come to terms with the seven that were taken away.

Tomorrow, our Movie Of The Week Forum delves into Fargo’s Midwestern values, its portrayal of masculinity, and the mystery of Mike Yanagita. Then on Thursday, Tasha Robinson surveys the punishing morality of the Coen brothers’ movie universe.