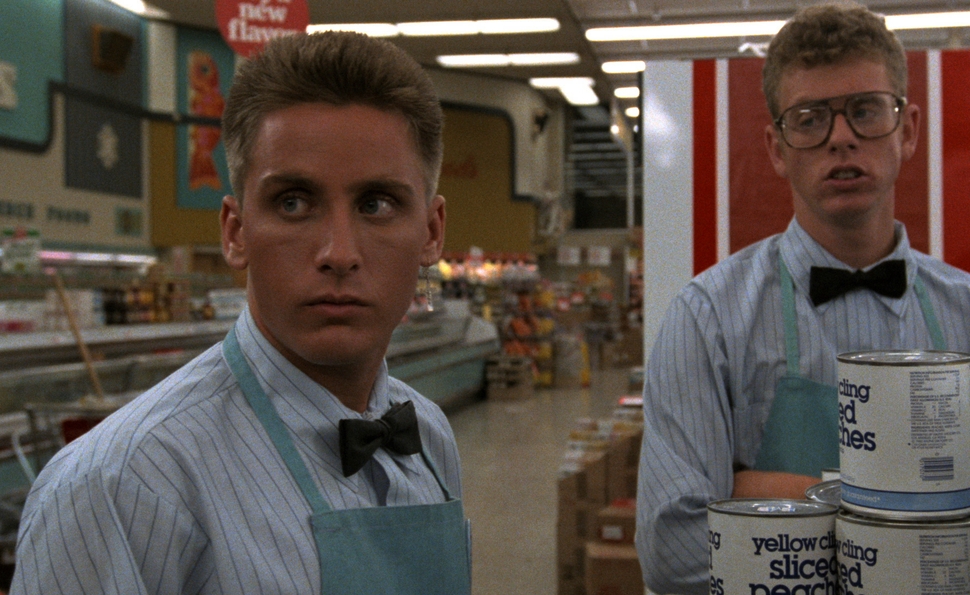 When Alex Cox was prepping the screenplay for his directorial debut, 1984’s Repo Man, he spent time riding along with real-life Los Angeles repo man Mark Lewis to get a feel for the job. One day, Lewis let Cox get behind the wheel of a Cadillac while its owner, a stockbroker behind on his payments, was between wash cycles at a laundromat. Cox reproduced the scene to hilarious effect in the film—in part to show that sometimes (though not often), it isn’t just poor people who have their property reclaimed by repo men. In a 1987 interview with Lewis, Cox reminisced about his experience: “I thought, starting out, what a terrible thing it was to be a repo man, what a wicked and immoral thing it was, but I really enjoyed stealing people’s cars.”

That statement is the essence of Repo Man: a perfect reflection of its politics, its jaundiced-yet-affectionate view of the L.A. punk scene, and its spiky, cheerfully irreverent sense of humor. It would be easy enough to cast Otto, the scowling young punk played by Emilio Estevez, as a rebel of the James Dean variety, a sensitive outsider flouting authority out of a deep hurt or a higher sense of morality than that of his parents or society at large. But while he does show glimmers of a conscience, those thoughts are far outweighed by his instincts as a miscreant and a pleasure-seeker. The kid enjoys stealing people’s cars, and if that puts him in league with The Man, it’s an irony he’s prepared to live with.

With a click of the sticks, Repo Man opens with Iggy Pop’s theme music blasting over a toxic-green map of Los Alamos, New Mexico, introducing the science-fiction twist that catapults the film from punk comedy to a vibrant, bizarre genre-jumping cult adventure. The connections between the film’s ground-level snapshot of seamy, Off-Off-Hollywood L.A. and its more out-there subplot about alien invaders and government cover-up aren’t immediately apparent, beyond a general mood of paranoia and anti-authoritarian sentiment. But Cox seems perfectly comfortable allowing a little madness and anarchy to seep into the film’s ramshackle architecture. Never mind that he’s flying Repo Man under the banner of Universal Pictures, the same studio that bankrolled Back To The Future the following year—it’s rough around the edges, but so be it. A more polished, market-tested Repo Man would have been a calamity.

The comic tension between rebellion and conformity surfaces early, when Otto and his dweeb buddy Kevin (Zander Schloss) are stocking cans with generic plain-text labels (e.g. Yellow Cling Sliced Peaches, Assorted Cookies) while Kevin sings a 7-Up jingle. Otto gets fired from that job, and when he proposes that his zombie-like parents advance him the $1,000 they’d set aside as a reward for him choosing to pursue higher education, they inform him the money has been earmarked for bibles in El Salvador. Opportunity knocks when Bud (Harry Dean Stanton), a veteran repo man, tricks Otto into serving as his accomplice on a job, and the prospect of stealing cars for cash turns the angry young man into a willing soldier.

“The life of a repo man is always intense,” says Bud, Otto’s mentor in this crazy business. But before long, the ordinary rush of car chases and belligerent deadbeats is heightened by intensity of a celestial kind. After helping a mysterious girl named Leila (Olivia Barash), Otto learns of a 1964 Chevy Malibu with a $20,000 reward attached. The hitch? The trunk contains four dead aliens, a dangerous cargo that vaporizes any humans who dare to inspect its neon-green, nuclear-waste aura. Like the light-filled suitcase in Pulp Fiction, the glowing trunk is Cox’s homage to the 1955 noir classic Kiss Me Deadly, but the doomsday portents of the earlier film are replaced here by a tone that’s deceptively whimsical and absurd. It starts as a weird tangent that eventually takes over, literally carrying Otto out of the movie.

Arriving in the middle of the Reagan 1980s, Repo Man remains one of the few examples of revolt within the system, and it’s no surprise to learn that Cox is fond of John Carpenter’s 1988 cult classic They Live, which also weds genre mayhem to cutting political satire. Both films take place in impoverished hinterlands untouched by boom economies, and either unacknowledged or suppressed by the powers that be. There isn’t much difference in appearance between the shantytown on the city’s fringes in They Live and the poor, desolate stretches of Repo Man, which captures areas of East Los Angeles that rarely appear on film and have a flavor distinct from the worn-out landmarks and generic Everytowns that typify most studio efforts. (Quentin Tarantino, surely a Repo Man disciple, has a similar feel for L.A. locales.) This is the Los Angeles where people live, yet there’s no signs of prosperity, just the circling vultures dispatched by the “Helping Hand Acceptance Corporation,” the absurdly euphemistic company that employs guys like Bud and Otto to steal cars.

For all its anti-authoritarian bent, however, Repo Man has a complicated, surprisingly ambiguous relationship with punk and capitalism, and a general aversion to dogma of any kind. Otto is a creature of impulse who’s only punk as far as it serves his appetite for destruction. He’s a lovable scamp, but not far removed from a “punk” as Dragnet might define it. He’s flexible enough in his beliefs that he happily trades his shredded rags for a sports coat when the job demands it. (His partner, by contrast, lives by the “Repo Code,” which assures the cars and their contents come to no harm.) Cox makes a joke of Kevin’s ambition to move from fry cook to manager in two years, but upward mobility isn’t a myth in Repo Man’s world. There are pursuits more moral and legitimate than the path Otto pursues, even if there are limits to real prosperity.

Still, the planet is doomed. As the hunt for the glowing Chevy Malibu takes on the cartoonish proportions of It’s A Mad, Mad, Mad, Mad World, with Otto and company rushing against the rival Rodriguez brothers and government goons, Repo Man gets consumed by nuclear paranoia, a fear that we’re trying to contain big secrets that cannot be controlled. It’s a funny thought to have a punk dope like Otto be the man standing between us and nuclear annihilation, but from the first scene, when a cop is vaporized by the contents of the Malibu’s trunk, Pandora’s Box just keeps on creeping open until its driver is sick with radiation and the car floats to the heavens in a sickly haze. Perhaps Otto had it right from the start: Best to follow your selfish instincts, have a little fun, and fuck things up until the world ends.

Our Movie Of The Week discussion continues tomorrow with a staff Forum about Repo Man’s relationship with consumerism, punk, identity, and more.