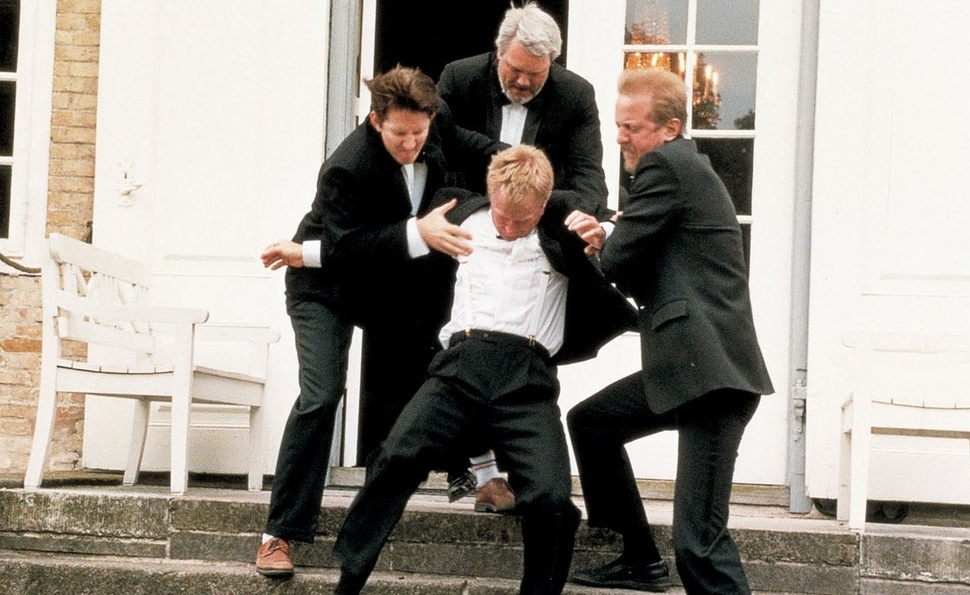 Movies adapted from stage plays are plentiful, but stage plays adapted from movies—dramatic plays, not extravagant Broadway musicals based on Disney animation—are pretty rare. The reason is simple: While a play can be “opened up” by creating new characters, moving scenes to different locations, etc., it’s significantly harder to go in the opposite direction. When Max Fischer’s production of Serpico at Rushmore Academy faithfully depicts a New York subway train rumbling past someone’s bedroom window, it’s hilarious precisely because that’s why no sane adult would try to adapt Serpico for the stage. The qualities that make most movies special are the same qualities that can’t survive translation.

The Celebration, as it turns out, is an exception—which makes sense, at least at a glance. The entire movie takes place at a single location (save for a few quick, early shots of cars driving to said location): the mansion-cum-hotel owned by Helge Klingenfeldt-Hansen (Henning Moritzen), where family and friends are gathering to celebrate his 6oth birthday. It unfolds over a period of less than 24 hours. The story, in which Helge’s eldest son, Christian (Ulrich Thomsen), uses a toast to accuse his father of molesting Christian and his late twin sister when they were children, provides plentiful histrionics for an ensemble cast. This isn’t a film that relies heavily on ambiguous facial expressions viewed in close-up. The Celebration has been adapted for the stage in multiple languages, with one celebrated London production directed by future filmmaker Rufus Norris (Broken).

Maybe it makes a terrific play. That’s entirely possible. Whatever the stage version’s merits, however, they can at best be tangentially related to those of the movie, which—Aristotelian unities notwithstanding—is aggressively, relentlessly cinematic. Some of that has to do with its status as the first Dogme 95 production, which Scott Tobias will be addressing at length in a separate essay later this week. Mostly, though, The Celebration serves as a superb example of how editing creates meaning, in ways that can’t be duplicated or even approximated in other media.

Take something as basic as the moment in which Christian first drops his bomb. Much of its grim comedy derives from the mock-casual way he tosses the allegation into the middle of his speech, as if it were something everyone assembled already knew and wouldn’t be remotely shocked to hear. Thomsen’s performance is exemplary, perfectly capturing Christian’s nervousness about finally taking this irreversible step; his words come in speedy machine-gun bursts, as if he’s afraid that even slowing down a little might bring him to a dead stop. But that’s something a first-rate stage actor could accomplish as well.

What won’t take place onstage is the moment that precedes this speech, when Christian taps his water glass with his knife to get the room’s attention. Director Thomas Vinterberg and his editor, Valdis Óskarsdóttir (who later cut Michel Gondry’s freewheeling Eternal Sunshine Of The Spotless Mind), depict this turning point in three shots: a close-up of the knife tapping the glass (without, as yet, any reference to who’s doing the tapping), a medium shot of Christian rising from his seat, and a tight close-up of his profile. This specific combination of shots—which also involves two lurching camera movements, one traveling upward and the other laterally from left to right—provokes a sense of anxiety even before he begins speaking. (Vinterberg also cuts to the kitchen after the third shot, revealing that the chef knows something is about to go down—tricky to convey theatrically, but not impossible.) None of the shots calls any particular attention to itself; their juxtaposition and rhythm create the mood.

Vinterberg’s entire approach to The Celebration is fundamentally rhythmic. Throughout the movie, he begins shots with whip-pans to create a feeling of urgency and restlessness, cutting not just on motion, but on frantic motion. When Christian asks the desk clerk whether his sister Helene (Paprika Steen) has arrived yet, for example, the film answers his question by cutting to a shot in which the camera nearly rear-ends the car driving her to the house (think Sam Raimi’s POV shots from the Evil Dead films), then zooms past it at high speed. Just as it passes the front end, there’s a second cut, to the car’s interior—but not, significantly, to Helene for the first split second. Instead, the camera begins pointed at the floor, and on the cut, abruptly swoops up to catch Helene lighting her cigarette. The effect, a sort of bam-whoosh that suggests intense recklessness, conveys exactly who Helene is before she’s said or done anything at all. Onstage, this would have to be accomplished with lighting, or perhaps music—certainly, it’s unlikely that the character is ever seen in a fast-moving car. Whatever the result, it wouldn’t be remotely the same.

At one point in the film, four events are happening simultaneously, in three different rooms:

Now, the dramatic focus of this sequence is unmistakably Helene’s discovery of the letter. At this point, apart from the existence of the birthday party and some basic sibling rivalry, nothing much has happened; the letter represents the first real hint at a narrative, and it’s deliberately frustrating when Helene starts reading it aloud, then quickly stops. (It does get read aloud in full, but quite a while later.) But as she reads the rest silently, a tear running down her cheek, Vinterberg and Óskarsdóttir continually cut back to the liquid in Christian’s glass, still trembling slightly from the earlier swirling, and to Pia staring up from beneath the bathwater with an unexplained look of sheer terror on her face. (Her expression is never explained. It has no function in the character’s minor subplot, only a purely symbolic function here—she’s standing in for the dead sister.) Michael, for the moment, is deliberately forgotten.

This moment of attenuated stillness is pure cinema. And so, too, is the eruption that follows: Noticing the desk clerk staring at her, Helene suddenly lunges at him and shouts “Boo!” (or whatever the Danish equivalent of “Boo!” may be), which sets off a chain reaction. Michael falls on his ass in the shower, Christian drops his glass, and Pia breaks the surface and takes a breath, with all four events occurring one after the other in (truly) a fraction of a second. It’s a magnificent display, but it also emphasizes the degree to which these people are intimately connected, which will become increasingly important as the film goes on, culminating in a final scene that sees them close ranks against a common enemy. Even slightly altering the number of frames in any given shot in this sequence would change its impact; it’s been painstakingly conceived and assembled to take advantage of the medium’s unique properties. Which is why it’s weird, at least from one perspective, to imagine somebody watching The Celebration, registering how it achieves greatness, and then thinking, “Hey, this would make a sensational theater piece!”

Again, maybe it does. There’s nothing inherently wrong with adaptation, which sometimes results in a work that’s distinct from the original, thrillingly reconceived for its new milieu. But a dialogue-heavy film set in a single location isn’t necessarily located on the pseudo-theatrical end of the continuum. (The same analysis could be made regarding Reservoir Dogs, another movie that’s frequently staged; one production was directed by a young Michael Fassbender, who also played Mr. Pink.) For all its friendliness toward actors and its Dogme-inspired nuttiness, The Celebration is first and foremost a motion picture, emphasis on the motion. Divest it of its formal brio, and there’s hardly anything left worth mentioning. Those theater folks had their hands full.

Come back tomorrow for our Movie Of The Week Forum discussion on The Celebration’s awkward comedy, its upstairs/downstairs dynamic, the way its characters process trauma, and more.