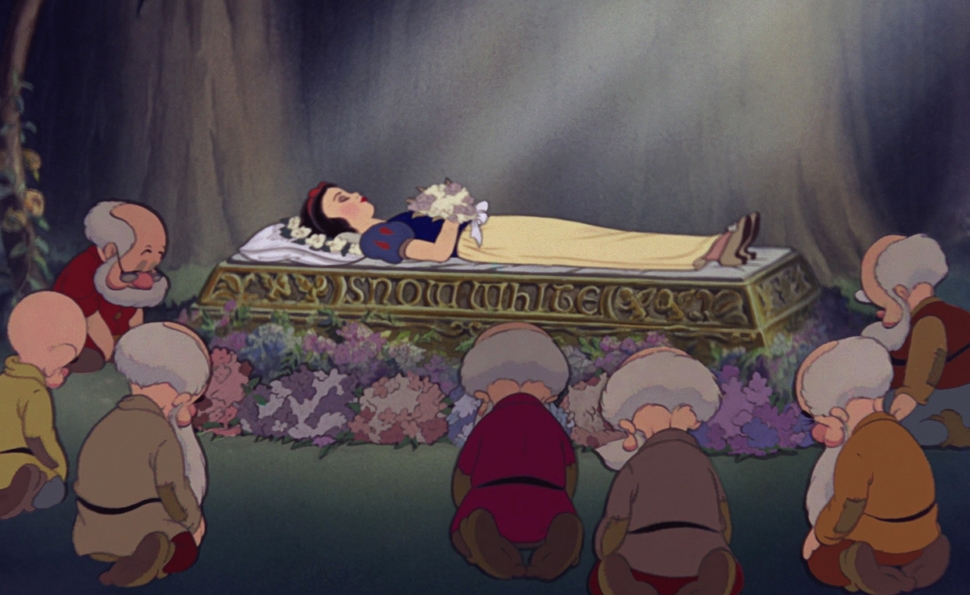 SPOILER ALERT: This essay touches on the endings of Disney movies from Snow White to Big Hero 6. Don’t worry, they’re all basically the same ending. That’s the problem.

Back in 1937, Walt Disney Animation launched an animated empire with Snow White And The Seven Dwarfs, the first feature-length cel-animated movie. The company stuck fairly closely by the original fairy tale: Jealous of Snow White’s beauty, the evil queen feeds her a poisoned apple that appears to kill her. The seven dwarves mourn her in a touchingly autumnal sequence, but then a kiss from the prince revives her. Death is averted, tragedy turns to triumph, everyone lives happily ever after.

For Disney, a trope was born in that ending that’s dogged the studio ever since, in films all the way up to the new Big Hero 6. Like M. Night Shyamalan, taking the wrong lesson from his breakout The Sixth Sense and investing all his subsequent films with the same chilly, airless tone and bug-eyed performances that worked for the first story, Disney has returned to the death-mourning-resurrection-celebration ending over and over since Snow White, with diminishing returns. The gimmick may work beautifully within the confines of a single film: In Frozen, Anna’s “death” from her sister’s heart-freezing accidental attack, and subsequent revival because of an act of true love, is heavily foreshadowed from the beginning. It’s thought-through and supported rather than arbitrary, and it’s directed well enough to be a powerful moment. No one in the audience needs to believe that a Disney movie is going to end with tragedy and grief. It’s enough that the characters believe it in the moment, that the story logic shows how they caused the situation they find themselves in, and makes a convincing (and slightly subversive) case for how they earned their escape. But taken as part of a continuum, the moment starts to look meaningless. It isn’t just about Anna and Elsa, it’s about all their forebears who went through the exact. Same. Story. Beats.

Maybe the problem was that Disney codified the “Disney Death” with its second film, 1940’s Pinocchio, which didn’t have the excuse of taking the death-and-resurrection ending from its source material. After dragging his father to safety from the mouth of the whale Monstro, Pinocchio lies face-down in a tide pool, apparently drowned. (Never mind that he’s a wooden puppet and doesn’t need to breathe, or that he proved it by walking around on the ocean floor at length while searching for Monstro.) Geppetto and his makeshift family (a kitten, a fish, and Jiminy Cricket) weep over Pinocchio’s body, so caught up in their grief that when he wakes up and asks what’s wrong, Geppetto says “You’re dead, Pinocchio,” and tries to get him to lie down again. This little piece of corny comedy fits oddly into such a dark moment, and it also suggests that even the Disney company wasn’t taking its film-ending deaths seriously anymore, even while repeating it from Snow White by rote.

And that’s the real issue: The more Disney returns to the exact same well, the less the Disney Death can possibly feel organic, no matter how thoroughly it’s worked into the story. The kids who grew up stunned by Bambi’s mother’s no-takebacks-this-time death often speak with a bit of a cynical sneer about the end of Lady And The Tramp, where the loyal bloodhound Trusty is seemingly crushed by a horse-drawn wagon while rescuing Tramp, only to appear with no more harm than a cast on his leg in the next scene. The Jungle Book has Baloo going down under Shere Khan’s claws, just long enough for a heartbreaking sequence with Mowgli trying to revive his limp body, and for Bagheera to mourn and praise him. (Baloo naturally wakes up in time to tease Bagheera for his uncharacteristic display of emotion.) Robin Hood has Robin disappearing into a moat, struggling under a wave of arrows; The Fox And The Hound sends the old hound Chief off a cliff and bounces him off a series of rocks. Both characters improbably survive. Beauty And The Beast has Beast die under Gaston’s knife before he’s brought back by his curse breaking. Similarly, Gurgi dies and is reborn in The Black Cauldron, and so does Megara in Hercules. Basil appears to die in The Great Mouse Detective, and so does Esmeralda in The Hunchback Of Notre Dame, who didn’t get a resurrection in the original book. Even Goofy in A Goofy Movie goes off a cliff to his apparent demise before his salvation is revealed. 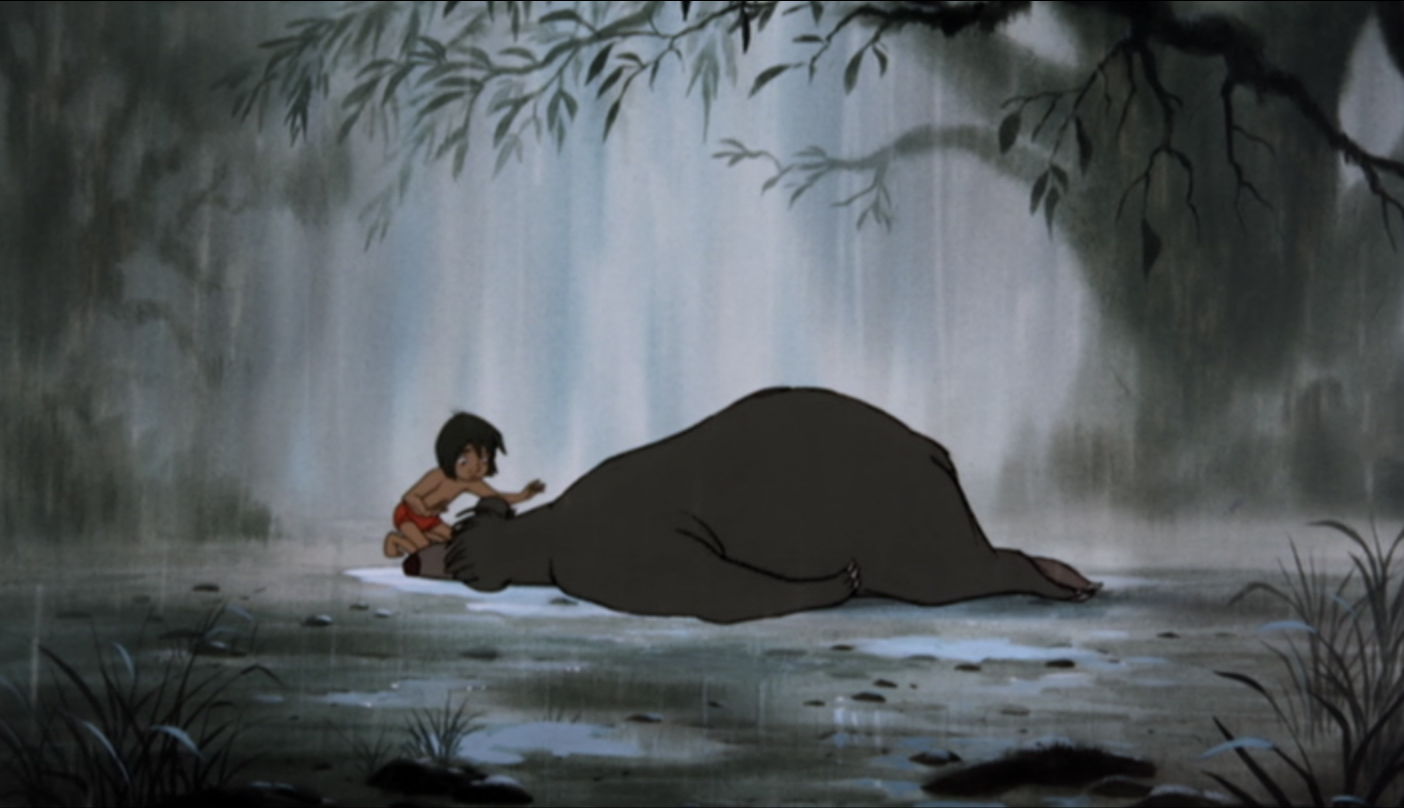 Disney films rarely make death permanent, but when it does, it has some hefty impact: Bambi’s mother dying has moved generations of kids who go on to speak of the movie in hushed tones of respect. Mufasa’s death in The Lion King has a similar impact, especially when Simba pulls the Mowgli-nudging-the-corpse trick, to no avail, and finally, uncomprehending and uncertain, curls up with his father’s corpse. Even The Princess And The Frog kills off the firefly character Ray, in a way that feels just a little pandering, but at least earns plaudits for not rolling it back. It certainly isn’t mandatory for an animated film to feature permanent death, but it’s so rare that it’s still striking when it happens.

Still, no matter how ambitious, sophisticated, and elaborate American animated films become, the Disney Death still dominates. It’s spread outside Disney to all sorts of films, from cartoons to adult stories; it’s a well-known way of injecting big pathos into a story. But Disney is the company that’s worn it into the ground. If anything, it’s become more present and more predictable over the last couple of decades. The Little Mermaid has Ariel mourning over her seemingly dead beau Eric. Wreck-It Ralph kills off Ralph in a heroic self-sacrifice—which he survives. Tangled kills Eugene and lets Rapunzel cry him back to life. WALL-E has the titular robot losing all signs of inner life, until he’s loved back from the beyond. Even films like Disney’s live-action/CGI hybrid G-Force get in on the action, once again faking the heroic death of a loudmouth who shuts up just long enough to hear his praises sung by grieving characters who would never praise him otherwise.

Amid all this repetition, it’s frustrating to see Big Hero 6 play to the exact same trope in a way that’s hard to buy within the context of the film: The cuddly, lovable health-care bot Baymax heroically sacrifices himself to save his “patient” Hiro, by repurposing a jet-powered hand into a rocket to push Hiro through a dimensional gate to safety. But behold, it turns out he secreted his operating-system disc inside that hand, and Hiro is able to re-create him on the other side, effectively resurrecting him. Except… when does this happen, given the camera’s close focus on the two characters’ conversation before their explosive separation? How does Baymax operate enough to see Hiro off without an operating system, given that we’ve seen he needs that chip to function? How is the disc intact after being clenched in a crushing robot grip in the middle of a rocket, and bashed all over creation? Viewers aren’t meant to ask questions, they’re meant to be happy to see the two reunited. And it is a sweet moment—but given Big Hero 6’s wild-ride inventiveness throughout the entire rest of the story, why did the film have to return to such a shopworn, forced trope for the ending? It’s the one thing in the storyline that feels unearned and unconvincing, as if the filmmakers didn’t bother justifying the logic because it wasn’t necessary to think through a chunk of narrative that came so pre-assembled and ready-made.

The funny thing is, a Disney Death can still sometimes work in an animated film—if it comes somewhere other than the end. 2014’s The Boxtrolls recently pulled a death-fakeout that lands closer to the middle of the film, and it’s useful for putting the story focus on the protagonists instead of supplementary characters. It also frees up the ending for a massive action sequence, followed by something enjoyably creative and unconventional. Our recent Movie Of The Week The Incredibles makes a smart move mid-film by bringing up all the emotion of a father who believes his wife and children have been killed—which leads to a game-changing plot development, as one of his antagonists shifts her sympathies. But it never tries to manipulate the audience by withholding information, pretending the characters are actually dead. The Book Of Life kills a character as a major plot point, then continues the story in the afterlife, with the question of how he can make it back to the land of the living. There’s still plenty of room for creativity within the death-fakeout idea, if it isn’t taken as a plug-and-play option that never substantially changes its form.

But that’s what it’s become in the Disney format, which makes end-of-film non-death feel routine, more a bit of mandatory business to be endured than an authentically powerful moment. Under John Lasseter’s stewardship, first Pixar and now Disney/Pixar have been doing amazing things with rich and complicated stories, unusual characters, original properties, and stylistic experiments. That’s why it’s particularly disappointing to see that Disney hasn’t outgrown the Disney-death trope, which is gradually closing in on a century of overuse. It isn’t fundamentally dysfunctional, but it’s become mechanical, and one of the only boring things left about films that are increasingly anything but boring.

For a decade after Shrek, non-Disney animated films, especially from DreamWorks, had a bad habit of ending with a mindless dance party, with all the characters cavorting to some big pop tune. This hasn’t entirely died out—2013’s Despicable Me 2 fell back on it, in yet another Minions-being-Minions sequence—but it appears to be on the wane, and none too soon. The Disney Death ending belongs on the same trash heap of outdated, overused, lazy plot developments. Let it die, Disney, let it die. And don’t bring it back with a gasp or a gag three wearily calculated, routine minutes later.