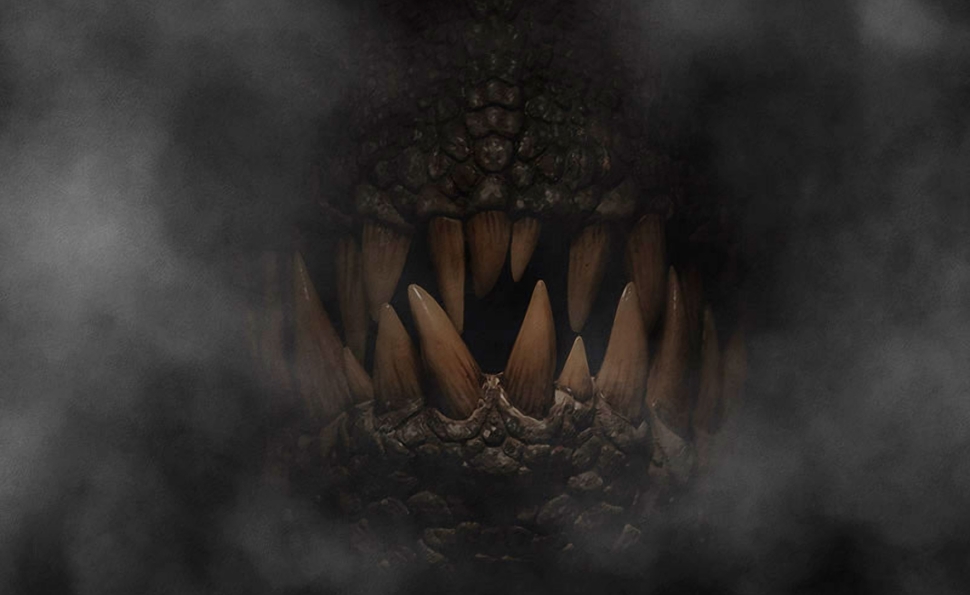 The first Jurassic Park was a classic story of hubris, offering the genetic revival of long-extinct dinosaurs as the umpteenth example of humanity’s false belief that we can control Mother Nature. What’s striking about the first film—based on the book by Michael Crichton, whose panic over genetics later extended to reactionary fantasies about female sexual harassers (Disclosure) and the coming Japanese takeover (Rising Sun)—is that the park unravels almost immediately. Even as John Hammond (Richard Attenborough) preens overs the wonders of a successful first tour, Dr. Ian Malcolm (Jeff Goldblum) is aghast at the carelessness with which Hammond and his scientists have summoned these beasts from extinction. The other doctors, played by Sam Neill and Laura Dern, concur. One power outage and some internal sabotage later, and Isla Nublar, the Costa Rican idyll selected for this experiment, effectively belongs to the dinosaurs.

Jurassic World takes place 20 years later, and immediately asks the audience to accept the following ideas: Another corporate-branded theme park has somehow been built around the Isla Nublar dinosaurs, and contained them so successfully and for so long that teenagers are bored in their presence. The real hubris and perversion of nature is not a dinosaur park, but the further genetic modification of these animals into super-dinosaurs like the “Indominus Rex.” And the events of The Lost World: Jurassic Park and Jurassic Park III, which had the dinos expanding to another island (and a T-Rex in San Diego) apparently never happened.

For fans of the first Jurassic Park—there are many—it’s a little shocking to see an operational park after Hammond’s failed so quickly and decisively. But part of the tacit contract we make with filmmakers is that we must accept their basic premises. We’re basically asked to be judges in a particularly ludicrous courtroom drama, saying “I’ll allow it,” or “I want to see where you’re going with this,” rather than immediately shutting down a dubious line of inquiry. At a minimum, we owe movies the chance to establish their own style, tone, and narrative logic. If any of those elements happen to crumble along the way, they’ve failed to deliver on the promises they’ve made to the audience. In Jurassic World, co-writer/director Colin Trevorrow has the luxury of forcing the audience to remember some parts of the first movie, while disposing of the parts that are inconvenient to him. He can pluck a B.D. Wong here and an old Jurassic Park jeep there, make vague reference to a long-ago tragedy, and ignore the fact that the first film forbids the existence of the fourth.

In other words, Jurassic World is part sequel, part reboot, and Trevorrow and company have no interest in reconciling the inherent contradictions. What they’ve done, quite cannily, is create a genetically modified blockbuster, composed of bits and pieces of mythology, past hits, character types, and tried-and-true cinematic techniques. When park brass talk about the need to create new attractions to raise attendance and revenue—and keep the kids from staring at their phones, as creatures that had previously been extinct for 65 million years dart around them—it’s also Trevorrow’s sly meta-commentary on blockbusters, which cannot be made new again, but rather can be patched together from all the best parts of previous blockbusters. Jurassic World is the Indominus Rex, a bigger and more exciting assemblage of the coolest stuff, set to hunt global audiences for sport.

Dinosaurs running amok is a feature of all the Jurassic Park films, and Trevorrow’s interest in the corporate environment of Jurassic World—where Verizon Wireless presents the I-Rex, and Jimmy Buffett himself makes a cameo in his Margaritaville chain—extends the branding of Spielberg’s original film to a satirical angle on product placement in line with Josie And The Pussycats. (The follow-through on this is minimal, which is a consequence of smushing so many different movies and themes together into a super-movie. The commercialism is more window-dressing, though it could be argued that product placement itself is window-dressing, and Trevorrow has it proportionally right.) 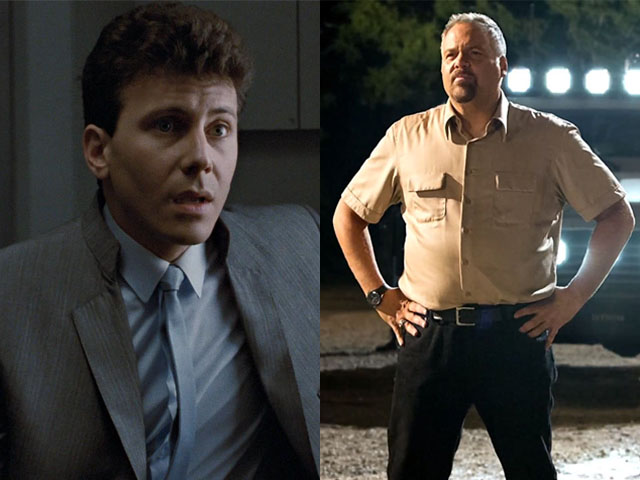 But the subplot that comes to dominate Jurassic World is purloined straight from Aliens, with Vincent D’Onofrio cast in the Paul Reiser role as the nefarious sleazeball who wants to harness the power of these deadly creatures for military purposes. To that end, he specifically targets the velociraptors, who are keenly intelligent, operate as a team, and appear capable of following orders—though that last part is contingent on Chris Pratt’s Owen, who has trained his raptors since conception. Even then, his control over them is tenuous. Trevorrow creates a toxic synchronicity between the park’s goals (to protect its operation) and the military’s goals (to secure the raptors), both of which hold precedence over the guests’ safety. But in other respects, it’s a repeat performance, including small details like outfitting a special-ops unit with mini-cams and heart monitors, which dramatically flatline as the I-Rex knocks them out of commission one by one.

As the first Jurassic Park progresses, it turns Dr. Alan Grant (Sam Neill), a humble paleontologist, into an Indiana Jones-like academic adventurer whose professional expertise gets him to the site, but who has to call on more primal instincts to survive. By Jurassic Park III, Dr. Grant has fully broken in the fedora and becomes a bonafide rugged hero as soon as the plane tumbles into Isla Sorna. In Jurassic World, Trevorrow skips the Clark Kent routine and casts Pratt as his genetically modified Indiana Jones—just as ruggedly handsome, swoon-worthy, and cool under duress, but bigger, stronger, and more masculine. Not only can he lead women and children to safety over seemingly insurmountable odds, but he’s the raptor-whisperer, taming killer instincts that have been in place for millions of years. He’s a fully evolved matinee idol. 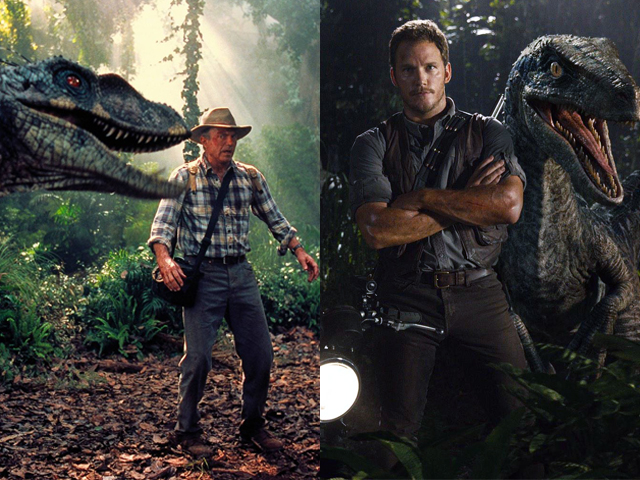 And for the fully evolved matinee idol, Bryce Dallas Howard’s Claire offers a hybrid of the modern and the (extremely) old-fashioned. Claire’s arc brings her in line with the likes of Kate Capshaw in Indiana Jones And The Temple Of Doom or Kathleen Turner in Romancing The Stone—or going back further, Katharine Hepburn in The African Queen—and the film queasily plays with the type of sophisticate turned damsel-in-distress who eventually summons the moxie to stop complaining about the dismantling of her comfortable life and take action. It’s hard to call what Jurassic World does with Claire an “updating” of an old type, other than putting her in a position of corporate power and surgically attaching a smartphone to her palm. And Claire’s reluctance to dispense with an impractical wardrobe defies all reason. But there are quotation marks around her that make it clear Trevorrow is consciously playing with adventure-movie archetypes; a shot late in the film, where she poses prone on the ground as the I-Rex towers above, has the quality of a King Kong screengrab. 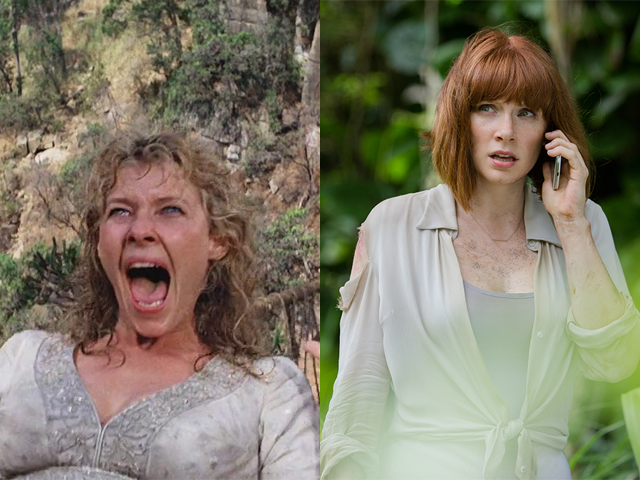 There are other key strands as well, particularly the kaiju action in the third act, which attempts to match the monster-on-monster action that the most recent Godzilla pulled off so thrillingly, and Pacific Rim somewhat less thrillingly. Jurassic World is true hodgepodge, mixing-and-matching character types, narrative strands, and relevant themes from past hits in the service of a tailor-made hit of another scale. There are two ways of looking at it. One is that Trevorrow is a fanfic artist, merrily playing in the blockbuster sandbox with the joy and verve of a child who never grew up. The other is that Jurassic World draws so heavily on past achievements that it doesn’t have the power to create new memories, those moments of awe and wonder that might make the film a generational touchstone along the lines of a Jurassic Park or a Raiders Of The Lost Ark or an Aliens. All movies build on past movies to some degree, but few are so thoroughly bracketed by quotation marks.

Trevorrow knows what he’s doing: A clever visual joke where a great white shark is fed to the gargantuan Mosasaurus like herring at the dolphin show acknowledges how much the blockbuster has grown since Jaws. Call it cynicism or market calculation, but Jurassic World openly acknowledges that it has to keep kids from looking at their phones, even if it means turning previous heroes and monsters into one hideous, rampaging, sociopathic beast. As much fun as Trevorrow has playing B.D. Wong behind the camera, his film often seems like its own harshest critic, practically reciting notes from the breathless pitch meeting where it was described as Jurassic Park meets Aliens meets Indiana Jones meets Godzilla meets The Birds. The trouble is, 10 or 20 years from now, nobody can pitch their movie as “Jurassic World meets” anything.