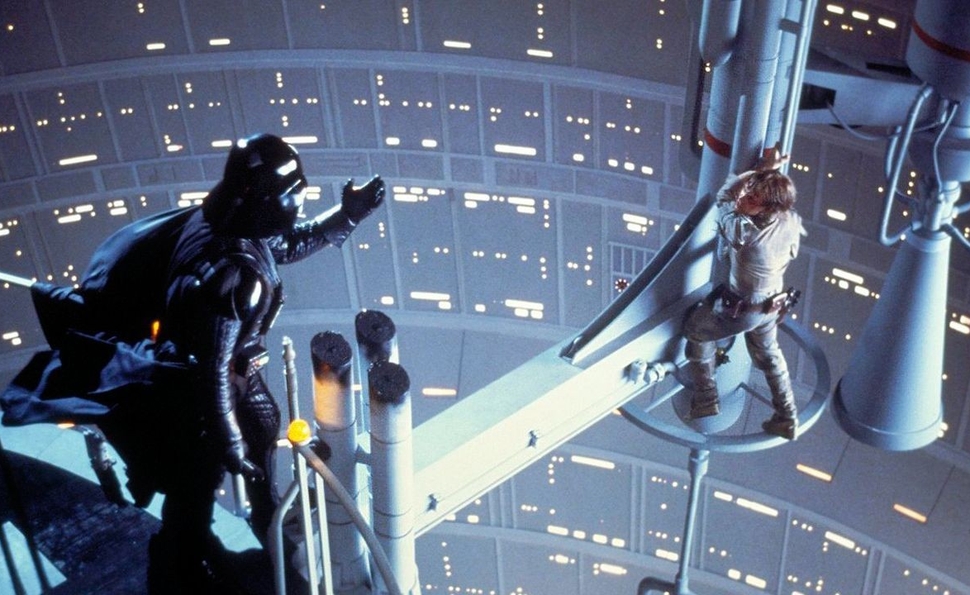 The Empire Strikes Back

One of my earliest and most vivid movie memories doesn’t actually involve seeing a movie. I was on a road trip with my family, curled up into the way-back of dad’s battered old station wagon with the novelization of The Empire Strikes Back. I loved Star Wars, and was so excited for the upcoming sequel, I was willing to spoil it for myself by reading the artless prose version. (As Noel Murray wrote earlier this year, the Empire merchandising machine was groundbreaking in terms of building audience anticipation via pre-movie marketing, with the book, toys, and trading cards.) And then I got to that unforgettably bleak ending: The heroes captured, tortured, and separated. Han Solo barely alive, and en route to become his enemy’s palace décor. Luke Skywalker mutilated and reeling from the revelation that his planet-killing, mentor-murdering nemesis is also his father. Heroic, fatherly Obi-Wan Kenobi proved to be a self-serving liar. The villains won, and instead of rallying together, the heroes declared their intention to scatter, to pursue their agendas separately. What I remember most clearly about finishing the book was my outrage: This can’t be right. Movies don’t end like this. For a couple of days, I actually half-believed it was some kind of prank or ploy, designed to drive people to theaters to see how the story really wrapped up.

I didn’t know back then that one of George Lucas’ big inspirations for Star Wars was the Flash Gordon movie serials of the 1930s, where cliffhangers leaving the characters in dire peril were a standard-issue tactic for luring viewers back to the theater. And as a filmmaker, Lucas emerged from the 1970s, when it was much more common for major movies to end on moments of ambivalence or outright protagonist disaster than it is today. Seen in context, from an adult perspective, Empire’s ending isn’t nearly as improbable as it seemed at the time, at least to one outraged kid. But it still reads as daring and unusual, even in an era where serial films and unresolved endings are becoming more and more common. Empire is constantly touted as the best of the Star Wars movies, in large part because of its strong emotional effect on its audience. (As i09 put it in a 30th-anniversary writeup, it “introduced a generation to tragedy.”) But while it had a strong impact on viewers, that impact didn’t extend to the ways filmmakers plan movie series. The second Hunger Games movie installment, Catching Fire, is the first film to really channel the emotional power of Empire’s final scene. (Spoilers ahead.)

Like Empire, Catching Fire ends with a key hero in an enemy’s hands, and  his compatriots isolated on a ship together, planning their next move. Catching Fire protagonist Katniss Everdeen ends her film in a slightly better situation than the Empire characters: She’s just learned for the first time that she has allies, they have a plan, and she’s sparked a revolution against the seemingly unassailable, oppressive government she hates so much. (She also still has both hands intact.) But as with Empire, that final scene isn’t played for uplift, and it doesn’t undersell the character’s trauma or pain.

Uplift is hard for serial filmmakers to resist. So is the lure of a self-enclosed story: Most series movies (the Indiana Jones movies, say, or Marvel’s superhero films) stand alone, introducing a single conflict, then largely resolving it at least enough to let the heroes celebrate what seems like a big victory. Even film series with a larger continuous plot arc, like the Harry Potter or Twilight movies, usually focus on introducing and defeating a villain, so the films can end with a sense of positive forward momentum. True serials, which end with wide-open plots and a to-be-continued story in progress, are rare.

And where they occur, they don’t follow George Lucas’ model, they follow Peter Jackson’s. His Lord Of The Rings movies were just as groundbreaking as the Star Wars series in terms of changing how the film industry approached genre. He brought movie series back into vogue by proving not only that audiences have the dedication to stick with an ongoing story where the installments come years apart, but that they’re willing to reward sprawling, multi-year epics with billion-dollar paydays. He spawned a vast wave of followers in terms of literary-series adaptations and a focus on epic fantasy filmmaking, but he also laid out a template for ending serial movies, via a statement of intent and a focus on looming peril.

Jackson ends The Fellowship Of The Ring with a statement of intent. Again as with Empire, the central band of heroes has splintered, with one member dead, and two groups headed in different directions. But where Empire director Irvin Kershner and writers Leigh Brackett and Lawrence Kasdan emphasize the solemnity of the moment in Empire, Jackson works for a sense of forward drive in Fellowship. The soaring musical cues emphasize the characters’ heroism, and the immediate action to come. Both groups declare their plans with weighted, weary determination. Similarly, The Two Towers ends with a statement of purpose from Gollum, who spells out his murderous intentions, then lays out the immediate peril by talking about the unknown “her” who will kill his hobbit buddies for him.

Other serial films are purer about choosing all-speech endings. Kill Bill 1 has a simple statement-of-purpose ending, with The Bride laying out her future Bill-killin’ plans to her latest victim, then flashing back to when she wrote up her murder list, which ostentatiously ends with a gigantic red “BILL.” (The film also adds an extra last-second hook: a one-line reveal about the fate of The Bride’s daughter.) The Golden Compass sets up a since-scuttled sequel with the protagonist Lyra listing all her unresolved goals, listing all the people on her side, and looking bravely and blankly into the distance as she promises, “We’ll set things right… Just let them try to stop us.”

And by contrast, some serial films go with the all-foreshadowing ending. Harry Potter And The Deathly Hallows: Part 1 closes with series villain Voldemort opening a key character’s grave, stealing a powerful artifact, and holding it aloft in lightning-cracking triumph. The Twilight Saga: Breaking Dawn—Part 1 has a sort of happy ending that gives series protagonist Bella what she most wants, then sets up the next peril with villain Aro snarling out his intentions. In all these cases, there’s a Jackson-esque sense of heavy foreboding, drama, excitement, and dread, a buildup of emotion so swelling and profound that it seems the directors hope viewers will overload on it, and carry that emotion around for the year or so until the next installment.

None of this happens in Empire or Catching Fire, which find their drama in quiet contemplation after the earlier fireworks. Emotionally speaking, they both underplay their hands. Like Luke and Leia in Empire, Katniss only has intentions, not a solid course of action, and certainly no big declaration-of-purpose speeches. Like the Empire characters, she isn’t in immediate danger: She has time to regroup and reclaim herself. 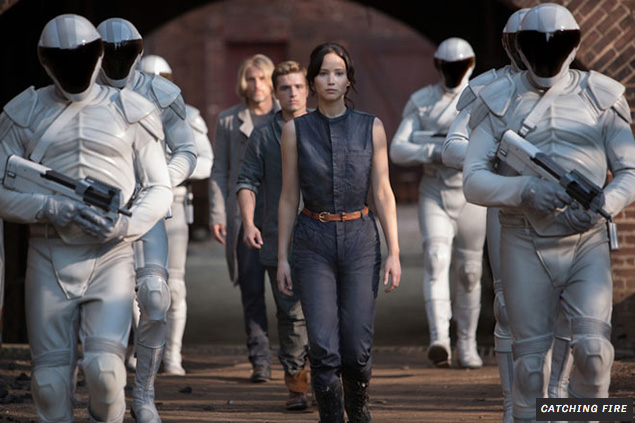 And that’s part of what makes Empire and Catching Fire so memorable, and so unusual. Neither is in a rush to get on to the next thing. Neither undercuts the grimness of the preceding sequences in order to push viewers out the door on a more hopeful moment. Neither one cares about pre-selling viewers on a film that won’t be available for a year or three. Neither clutters up the ending with derailing, blunting detail: Luke, silently examining his new robo-hand, doesn’t chatter about it with the medical droid installing it, or explain it to the audience. He and Leia don’t talk out their feelings about Han or Darth Vader. Katniss, still in the dark about most of the details that led her to the film’s final moments, doesn’t ask to have those events filled in or spelled out. She leaves the audience as disoriented in the moment as she is, and she just takes time to think.

And as she silently processes what little she knows, director Francis Lawrence zooms in on her face, and watches closely. The film’s final shot, as she comes to some kind of accord with herself, and calmly looks directly into the camera—almost always a mildly disorienting, daring moment in a film—is as striking as any statement of purpose, but without a windy speech to deflate the emotion.

In a way, this hookless ending, with no spelling out of next steps or specific threats, defies the way movie serials have worked since Empire. Even the outliers on the speech/peril gamut have hooks: The comedic Back To The Future 2 ends with a gag, and a “Hey! New storyline! Come back soon for more!” moment. Even Ralph Bakshi’s comparatively somber Lord Of The Rings ends (in some of its various cuts, which were removed from Bakshi’s control) with a title-card tease and/or narration, setting up the never-funded second half. Catching Fire doesn’t have a single promise of what’s up next, except whatever individual viewers choose to read into Katniss’ stern, calm gaze.

But in another way, Lawrence and company are smartly grabbing hold of modern anticipation culture. As Matt Singer pointed out in an August essay about the rise of teaser culture and The Wolverine’s ending commercial for X-Men: Days Of Future Past, anticipation has become its own form of entertainment, and for many people, speculating about an upcoming movie is more fun than actually watching it. And nothing fuels a wider range of speculation than a blank slate. That’s what Empire and Catching Fire offer fans: a rich setup, no specifics about what’s going to happen next, and no oversold emotional burden to carry out the door. Most serial films end by spelling out exactly how the characters are headed into disaster, and in some cases, exactly what they plan to do about it. Empire and Catching Fire closes with a sense not just of something continuing, but potentially, even more thrillingly, of something new beginning.