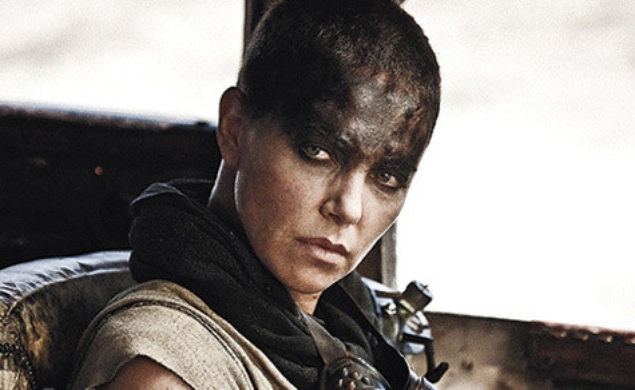 Harbinger of doom/Sign of hope hybrid: MRA response to Mad Max: Fury Road
Men, women, and Keiths alike are here for Mad Mad: Fury Road. One of those Keiths, our own Mr. Phipps, gave the film five stars, saying it “set the standard by which future action films are destined to be judged.” But some—namely, Men’s Rights Activists, a.k.a. MRAs—believe it’s a nasty piece of feminist propaganda that will turn everyone on Earth into equal-rights-supporting monsters, subsequently destroying the carefully wrought system of misogyny that’s kept our society churning along so well all these years.

On the blog Return Of Kings, a pleasant fellow by the name of Aaron Clarey is calling for men (and “real women”) to boycott the movie. I won’t link to it, and please don’t visit it!, but here’s the text, via The Mary Sue:

“Not only REFUSE to see the movie, but spread the word to as many men as possible. … Because if [men] sheepishly attend and Fury Road is a blockbuster, then you, me, and all the other men (and real women) in the world will never be able to see a real action movie ever again that doesn’t contain some damn political lecture or moray about feminism, SJW-ing, and socialism.

[…] men in America and around the world are going to be duped by explosions, fire tornadoes, and desert raiders into seeing what is guaranteed to be nothing more than feminist propaganda, while at the same time being insulted AND tricked into viewing a piece of American culture ruined and rewritten right in front of their very eyes.”

More, from a commenter:

“Hollywood is a garbage propoganda [sic] machine which spews out this feminist drivel filth into the minds of today’s young audience. Even though science has told us and proven, that men are physically stronger than women, it is nonetheless discarded by the forces driving this feminist nonsense.

There is a sick agenda at play here, and it only continues to get worse over time. First this, and now the upcoming Terminator Genisys which shows Sarah Connor in a more heroic and superior position to that of Kyle Reese, really makes me wonder how much further down the toilet society is going to go down, in it’s ridiculous attempts to try and reverse the traditional gender and biological roles.”

The comments continue to devolve from there, with men saying they’d “belt” their wives and daughters if they ever “exhibited confidence” or refused to “exude obedience and timidity.” Oh, and they’re not happy about The Vagina Monologues’ Eve Ensler consulting, either. Probably the whole “monologuing vagina” image didn’t sit well with them.

The good news? Every news outlet that’s covered this story has found it, at the very least, utterly laughable, and at most, deeply fucking terrible. And the Twitterverse’s main response has been along the lines of, “Whoa, if any movie is pissing off MRAs this badly, I really can’t wait to see it.”

If Mad Max: Fury Road does manage to shake up the world a little bit, can it shake things in Return Of Kings’ general direction? Like, maybe when they’re near a high cliff or something?

Sign of hope: Smart, influential people speaking out about feminism
There were several women, one Ethan Hawke, one Colin Hanks, and one George Miller willing to throw their hats in the feminist ring this week. Here are a few great quotes from around the web:

DANIELS Are there African-American writers on your show?

TREEM There is one writer of color, but he's not African-American.

DANIELS Are there any African-American writers on your show?

GANSA There are not.

DANIELS How about yours?

KING Last season there were two, but one of them went off to create her own pilot.

DANIELS Good. How many on your show? I'm just curious.

WILLIMON How many women do you have?

DANIELS We have three women.

WILLIMON How many Asian-Americans do you have?

DANIELS We have no Asian-Americans.

WILLIMON Just, it's a weird question. But we have zero African-Americans in our writers room of six.

Harbinger of doom: This week in Marvel bullshit
Oy. I’m getting really tired of typing “Marvel bullshit.” Marvel and Disney removed Black Widow from yet another piece of merchandise this week; this time, though, they pulled her out of a toy depicting her very own scene and replaced her with Captain America. At least replace her with Banner, guys! Show some respect.

As io9 noticed earlier this week, Hasbro’s Marvel Avengers: Age Of Ultron Cycle Blast Quinjet Vehicle is a “fast-diving jet with a secret weapon—a component that launches a motorcycle! With your Captain America figure speeding away on his powerful cycle, the jet can climb back to higher altitude for recon and air attacks.” Oh, cool. It’s just like that part in the movie where Captain America jumps from a jet, then speeds away on a powerful cycle. Except that was Black Widow. Coming down from aid jet to save Captain America. Who was getting his ass beat by Ultron. Hm.

As the A.V. Club points out, it’s “so weird that both of these toys also forgot to include Black Widow in their pictures of the Avengers team on the boxes.” So weird! What an oversight! They’re probably so embarrassed.

Sign of hope: The A.C.L.U. inquiry into Hollywood’s hiring practices
As Kate reported earlier this week, the A.C.L.U. looking into Hollywood hiring practices. Can I get a “fuck yes”? Oh, and can I get a “finally”? Someone in the comments section on Kate’s piece suggested they use Female Stuff as evidence, which is the biggest compliment I’ve ever received in life. This is me officially giving permission, A.C.L.U.!

Here’s the official word, courtesy of the New York Times: “The A.C.L.U. will ask state and federal agencies to investigate the hiring practices of Hollywood’s major studios, networks and talent agencies, and possibly bring charges against them, for what the organization described as rampant and intentional gender discrimination in recruiting and hiring female directors.” The org went so far as to issue a letter, addressed to various agencies, that lays out the reasoning behind this claim, along with a call for investigation, action, and change.

As Kate points out, while this plan is ambitious, it’s not unprecedented—in the 1960s, the Justice Department found employment discrimination in Hollywood and reached a settlement between the Association of Motion Picture and Television Producers and several unions; remedial measures ultimately failed. So fingers crossed that things turn out better this time around. If they don’t, they’ll have a really pissed off Dissolve commentariat to respond to.

Several prominent female directors have spoken out in support of the investigation. Here’s Kathryn Bigelow’s statement to Time: “I have always firmly believed that every director should be judged solely by their work, and not by their work based on their gender. Hollywood is supposedly a community of forward thinking and progressive people yet this horrific situation for women directors persists.Gender discrimination stigmatizes our entire industry. Change is essential. Gender neutral hiring is essential.”

And IndieWire reached out to a group of female directors, including Hannah Fidell, Leah Meyerhoff, Susanna Fogel, Nicole Beckwith, and Sarah Goodman, all of whom applauded the effort and told stories of their own experiences with gender discrimination. Here’s a particularly resonant one, courtesy of Cornelia Ravenal, co-founder of Wilderness Films:

“A few years ago, my male partner and I were working with a young male producer, when I realized that no matter how gracefully I phrased my emails, he'd respond curtly, patronizingly or sometimes not at all. Once I was copied on a thread I was not supposed to see, and saw a comment to another partner that he didn’t like my "tone." So I decided to try an experiment. I continued to write emails as before, but instead of sending them myself, I asked my male partner to send them from his email account under his name. The response was fascinating: when it seemed as if the emails came from a man, the same male producer was cordial, constructive and responsive. At one point, he commented on how much easier it was to be emailing with my male partner than with me – unaware that in fact, I was still the person with whom he was communicating.”

Overall, was this a good, bad, or neutral week for women in movies, Rachel?
Gonna call it: This week was good. I know! What world is this? The A.C.L.U. inquiry is pretty huge, and it’s the exact type of response that we Female Stuffers (no? yeah, no.) have been hoping for. I’m still pissed at you, Marvel, for what’s now become weekly nonsense. And I’m always pissed at you, MRAs, for advancing your dangerous and hateful agenda. But while there will always be MRAs, there will also always be people who mock the MRAs roundly in the public sphere, then proceed to completely ignore them, and for that, I am thankful. Mostly, though, this week I’m thankful that the A.C.L.U. is taking discrimination against women seriously. Let’s hope real change comes as a result of these investigations.