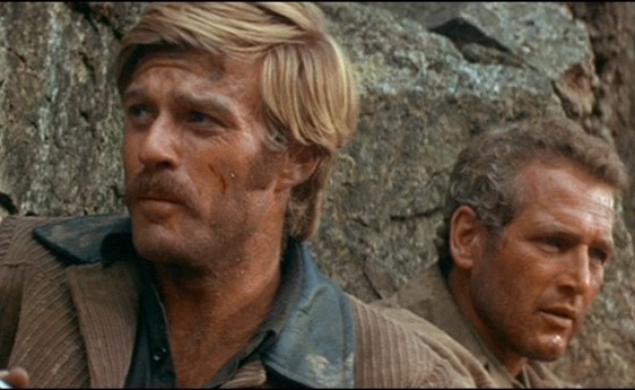 Some film sequences are so memorable and so iconic that they can fool audiences into thinking that they represent a film in microcosm rather than an aberration. A good example would be the disco dancing scenes in Saturday Night Fever, which are so dynamic and exciting and sexy that a lot of people misremember John Travolta’s breakout film as a fun, escapist drama about a young man who loves to dance, and not an almost unbearably grim drama about a despondent young man who clings to dance as an escape from the blue-collar misery of his everyday life.

Similarly, the montage of Paul Newman’s Butch Cassidy riding a bike alongside the lovely Etta Place (Katharine Ross) to the satiny sounds of Mac Davis singing Burt Bacharach and Hal David’s “Raindrops Keep Falling On My Head” led me to misremember Butch Cassidy And The Sundance Kid as an ebullient, bittersweet buddy comedy whose overwhelming glibness is undercut by moments of tragedy. I remembered it as a film almost too clever in its dialogue, a banter-fest full of glib sarcasm and droll one-liners. William Goldman’s Academy Award-winning dialogue is fiendishly funny and whip-smart, but there is a whole lot less of it than I had remembered, and a whole lot more silence and foreboding.

Butch Cassidy And The Sundance Kid is the story of two men out of time, a pair of outlaws who discover to their muted horror that the era of the glamorous, train- and bank-robbing Old West outlaw has passed. They are men of the past being pursued relentlessly by emissaries from the present and the future, most notably in the form of a pair of mythical trackers who have been hired by a railroad company to make the duo and their posse, The Hole In the Wall gang, a remnant of the Wild West’s past.

From pretty much the opening scene, it’s apparent that these charming men are doomed to die, that the forces of commerce and progress simply will not tolerate them disrupting the steady flow of money from one place to another via their string of notorious payroll robberies. The two men are a complementary study in contrasts. The Sundance Kid is all brooding, focused intensity and sharp-shooting chops; Butch Cassidy is a man of words more than a man of action, who is so irresistibly charming that his victims feel half-blessed to be held up by such a courtly and delightful gentleman.

I misremembered the film as being nonstop dialogue, when its first hour consists largely of long, wordless stretches of Cassidy and The Sundance Kid being pursued across long distances by forces they do not recognize or understand. The film looks gorgeous, thanks to Conrad Hall’s sun-dappled cinematography, which gives the film the air of a sepia-toned photograph of a time too wonderful to have ever existed, and Bacharach’s score adds an element of 1960s levity and whimsy to what is ultimately a film about two cursed men biding their time before the inevitable release of death. Replace Bacharach’s score with someone more expected, like Ennio Morricone, and Butch Cassidy And The Sundance Kid is a very different, much heavier movie altogether.

In the film’s second half, the duo, realizing they wore out their welcome in all of God’s United States and that there’s nothing left for them but certain death, head down south to Bolivia, where they discover, much to their frustration and horror, that things aren’t that different in Bolivia, except that they have a different batch of killers on their trail.

Butch Cassidy and The Sundance Kid are doomed to their destiny, however fatalistic it might be, so there’s a wordless montage of them robbing banks in Bolivia before, in a rich irony, these notorious payroll thieves get jobs as payroll guards. Just as I misremembered Goldman’s screenplay as more wordy and central than it actually is, I misremembered George Roy Hill’s direction being a lot flashier and more intense than it actually is. Hill is a wiz with montages, and engineered one of the greatest final freeze-frames in film history, but his direction is more mournful and understated than it is over-the-top.

The ultimate buddy comedy is still a great movie, but I’d gotten its components backwards. I remembered it as a glib but wildly entertaining comedy littered with stark moments of tragedy, when in actuality, it’s a stark tragedy about two men as handsome and charismatic as they are doomed, littered with moments of glib and wildly entertaining comedy.

Nathan’s Revised IMDb Top 250 Rating (based on films covered for this series so far)
1. The Best Years Of Our Lives
2. Some Like It Hot
3. Blade Runner
4. North By Northwest
5. In The Mood For Love
6. Network
7. Her
8. All About Eve
9. Casino
10. Butch Cassidy And The Sundance Kid
11. Requiem For A Dream
12. Hotel Rwanda
13. Incendies
14. Pirates Of The Caribbean: The Curse Of The Black Pearl
15. The Truman Show
16. Blood Diamond
17. Slumdog Millionaire