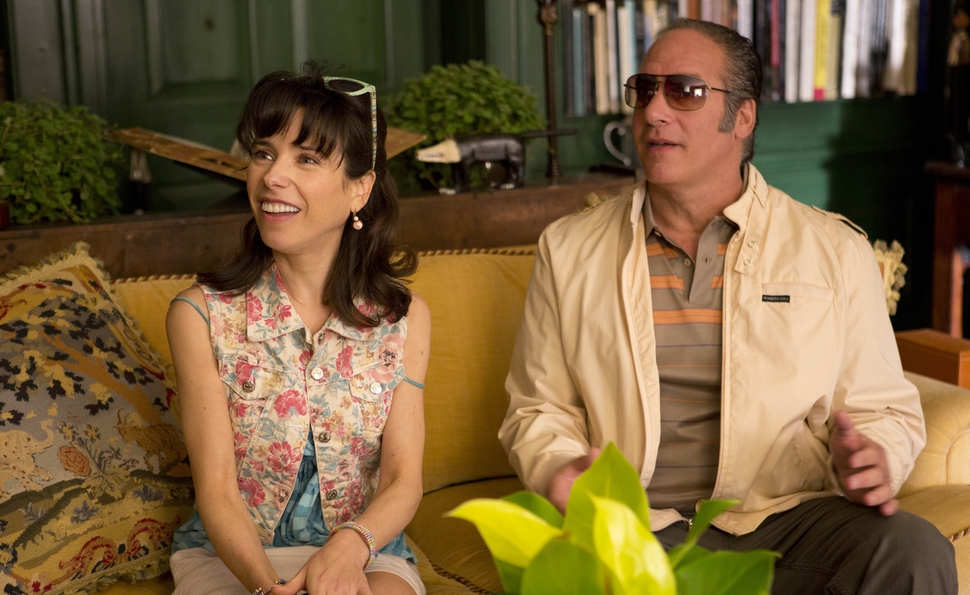 On more than one occasion over the course of Blue Jasmine, Cate Blanchett’s protagonist—the Jasmine of the title, though those who’ve known her for a while know she used to be Jeanette—reflects on her first meeting with her husband Hal (Alec Baldwin), as “Blue Moon” played in the background and Hal, in Jasmine’s words, “swept me off my feet.” There was nothing she could do about it, really, but drop out of Boston University and follow where he led, which happened to be Park Avenue and luxurious points beyond, where they enjoyed a life of privilege unthinkable to most. As the film opens, Jasmine relates all this and more to the woman sitting next to her in the first-class section of a plane bound for San Francisco from New York. It’s a tale she’s told many times before and will tell many times again, one in which she’s had little choice but to let life take her where it will. But there’s a conspicuous absence as she lands in San Francisco: Hal is gone, as is the illusion that her life is anything but her own to lead. Her world is now suddenly nothing but terrifying choices.

Viewers are soon told that Hal once ran a Ponzi scheme of Madoff-ian proportions, and Jasmine’s journey west is born of need and shame following his public downfall, though that isn’t part of the story she tells others, or even part of the story she tells herself, most of the time. She’s come to San Francisco to stay with her sister Ginger (Sally Hawkins), though the relationship’s a bit more complicated than that. Both were adopted as children, but in Ginger’s words, Jasmine scored the bulk of their parents’ affection thanks to her superior genes, a word Ginger uses to host a lifetime of resentment and to explain, harshly but accurately, why Jasmine—with her blond hair and ability to put on patrician airs—ascended to the 1 percent, while the less glamorous, more practical Ginger has worked a series of menial jobs to support her two children. Even that story isn’t as simple as it seems at first, since Ginger and her ex-husband Augie (Andrew Dice Clay, who’s aged into the put-upon schlub he was born to play) lost a small fortune by entrusting their lottery winnings to Hal.

Woody Allen is attempting to tell a couple of different stories of his own with Blue Jasmine, one richer than the other. After fleeing a home she felt didn’t want her, Ginger has made her own way while watching Jasmine float higher and higher. Ginger’s ability to keep her feet on the ground has served her well, but she still lets her sister get in her head. Now dating the agreeable-but-rough-edged Chili (Bobby Cannavale), she starts to see him though Jasmine’s eyes and wonder if she could do better. Though the characters are well-played by Hawkins and Cannavale, who projects vulnerability even in the grips of rage, there’s a whiff of condescension in the way the film draws a line between the genuineness of working-class folks and the phoniness and false values of those with money.

The more compelling story unfolds in pieces. Jumping back and forth between Jasmine’s precarious present and her sheltered past, Allen portrays how environment shapes, and sometimes destroys, our characters. When Ginger and Augie come to visit Jasmine prior to her fall from grace, she treats them like poor relations, giving them limos, tour suggestions, and an expensive purse, but little of her time, and as little contact with her social circle as she can. After she emphasizes to Ginger in the present, yet again, how little she knew of her husband’s business doings, Allen shows her lounging poolside and turning a deaf ear to some shady goings-on. It’s simply what one does when sheltered from the rest of the world—and its rules—by layers of money and lawyers.

When those layers fall away, she’s left unprotected and unable to adapt, especially to her humble new living circumstances. Jasmine is unclear on why Ginger doesn’t silence her sons, whose horseplay gives Jasmine such a headache. Or why Ginger can’t understand that Jasmine could never date one of Chili’s friends, or take a job as receptionist at a dentist’s office, because really. Or why Jasmine doesn’t want to talk about the harm she did to Ginger’s family, because after all, it’s in the past. But Jasmine’s story is much more than that of a fish pushed out of water by lawsuits and frozen bank accounts. For all the memorable dialogue and elegant camerawork (courtesy of Javier Aguirresarobe), it’s Blanchett’s movie, and her performance tells yet another story, that of a woman losing control.

There’s a fear behind Jasmine’s eyes, evident whether she’s talking about her high-society past or tearing into Chili for interrupting her attempts to study for a computer class while she drowns yet another Xanax with yet another vodka. And despite her talk of going back to school and starting over, only the possibility of reclaiming her old station really keeps her on track. When Jasmine meets Dwight (Peter Sarsgaard), an aspiring politician who takes a romantic interest in her, she rallies her energies to keep his attention. While that means spinning lie after lie about her past, it’s only a more pronounced version of the self-creation she’s always performed. 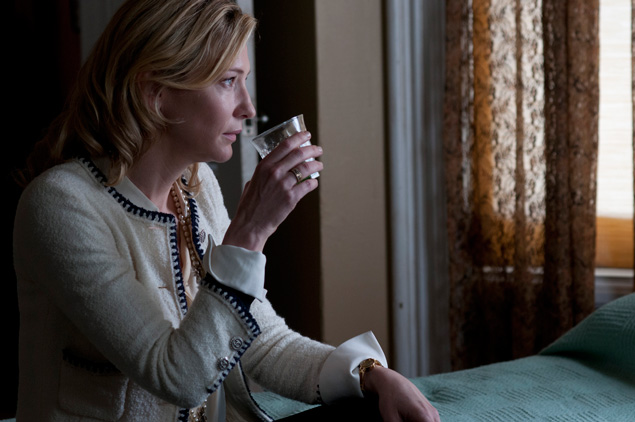 In a performance that at times recalls, without embarrassment, Gena Rowlands in A Woman Under The Influence, Blanchett plays Jasmine as a woman on the verge of becoming incapable of living in the world. However much medication she takes or booze she drinks, she’s forever on the verge of cracking, transforming from a self-dramatizing over-sharer to the sort of desperate character most would cross the street to avoid. At moments, she makes Jasmine almost vampiric, a creature driven by need who sees the world and everyone in it as being put in place to service those needs. However, the amount of time the film spends with her both before and after the fall makes her a sympathetic vampire—or at least a pitiable monster, seemingly incapable of changing no matter how drastically the circumstances around her alter. And maybe she’s right. Maybe she had no choice in the matter. Swept off her feet long ago, she’s been left with nothing to do but fall. That’s one version of the story, anyway.