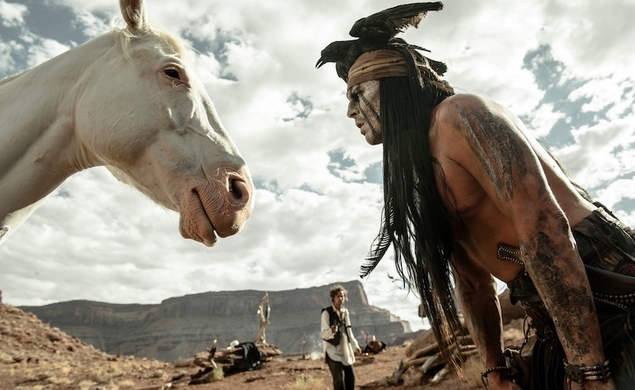 On the international press tour for The Lone Ranger, the film’s creators laid the blame for their failure where it obviously belonged: on the critics who gave them negative reviews.

Speaking to Yahoo! Movies U.K., the Lone Ranger himself, Armie Hammer, said that critics were “gunning for our movie since it was shut down the first time.” The bad reviews (28% percent on Rotten Tomatoes), he claimed, were written months before the movie opened. Critics made up their minds in advance, and always make up their minds in advance because “It’s got to the point with American critics where if you’re not as smart as Plato, [you’re] stupid.” He continued:

“While we were making it we knew people were gunning for it. I think it was the popular thing when the movie hit rocky terrain they jumped on the bandwagon to try and bash it. They tried to do the same thing with to World War Z, it didn’t work, the movie was successful. Instead they decided to slit the jugular of our movie.”

Yes, critics expected—nay, demanded—a blockbuster with the brilliance of Plato. When that was not delivered, the movie’s fate was sealed. Critics went straight for the jugular—I personally saw a few outside my local theater with knives, threatening people who dared to try to go see The Lone Ranger. It was an ugly scene.

Hammer’s comments are particularly absurd in light of his comparison to World War Z, a movie he claims critics “tried” and failed to kill. But on the whole, the movie press liked World War Z, to the tune of a 67 percent approval rating on Rotten Tomatoes. I guess critics have a weird way of expressing their disapproval.

Presumably, Hammer is conflating critics with other film journalists who cover troubled productions like Lone Ranger and World War Z. But those are two distinct jobs, neither of which involve carrying malicious vendettas against blockbusters. If critics really were so easily brainwashed by production horror stories, they would have hated World War Z just as much (if not more) than The Lone Ranger. But that didn’t happen.

Plenty of the year’s biggest hits were critical flops: Identity Thief made $134 million with a 20 percent rating on Rotten Tomatoes; Grown Ups 2 made $116 million (and counting!) with a 7 percent on the movie review aggregator. Both of those movies received more negative reviews than The Lone Ranger, and both earned a lot more money than The Lone Ranger.

So what was the difference? Well, unless there’s some kind of massive conspiracy involving critics and audiences that only covers Johnny Depp movies (which would be a lot of effort for a very narrowly-focused sinister cabal), it seems that audiences just didn’t buy what Hammer and Depp were selling.

Movies like The Lone Ranger are specifically built to be critic-proof, with a massive blitz of marketing and cross-promotion designed to batter moviegoers into submission. In this case, people resisted from the get-go. Bad reviews might have been one factor, but they certainly weren’t the only one.

The entire model of placing the fate of a movie on a ginormous opening weekends specifically removes critics and what little influence they still wield from the equation (the practice of accusing critics of confirmation bias doesn’t help in that regard, either). If critics had loved The Lone Ranger, it might not have made much of a difference; good reviews haven’t done much to boost Pacific Rim, which will almost certainly wind up grossing less in the United States than Identity Thief and Grown Ups 2 (or World War Z, for that matter). The only real use these blockbusters have for critics is as convenient scapegoats.