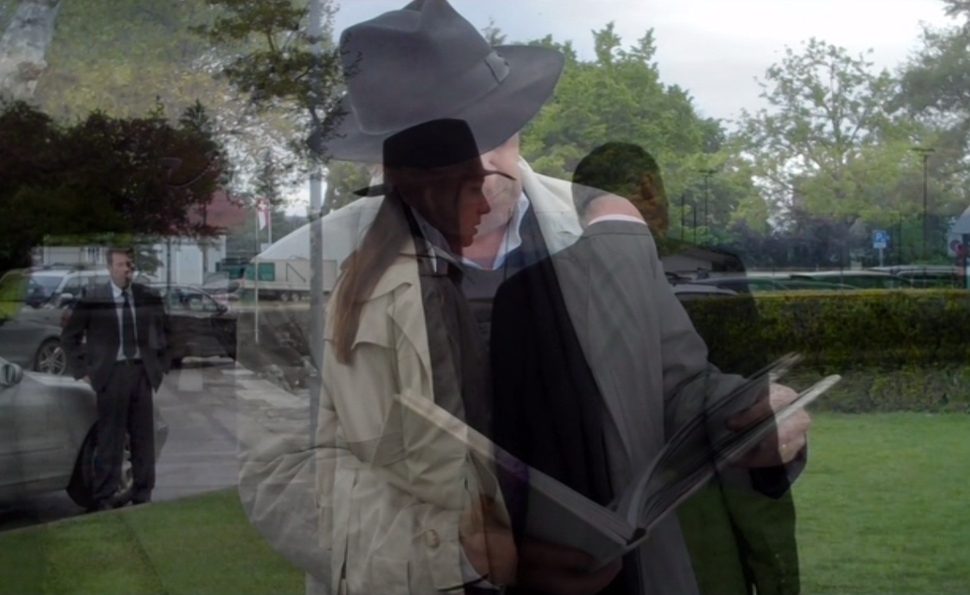 The shot of the year

There’s a single shot in Jean-Luc Godard’s Goodbye To Language so astonishing that the sold-out crowd I saw the film with gasped in unison. Perhaps a generation of blockbuster entertainment and stock response has deadened the word, but the only way I can think to describe it is “awesome,” in the literal sense. It inspires awe. At the thousand-seat Ryerson Theater, where the film made its North American première this September, the surprise and delight were audible, in the form of exclamations and spontaneous applause. For a moment, it was less like a movie than a magic show. I sat mouth agape, stupefied. I felt like I’d just seen someone levitate.

Here’s what happens: A young woman, Ivitch (Zoé Bruneau), and an older man, Davidson (Christian Gregori), sit together on a park bench near the water, flipping through a book of paintings by French abstract landscapist Nicolas de Staël, when suddenly Ivitch’s husband pounces into the frame and hauls her out. The two cameras that compose the 3-D image diverge, and the shot seems to split into two: one tracks Ivitch as her husband circles her and brandishes a pistol, the other remains fixed on Davidson, until at last Ivitch returns to Davidson’s side and the two images converge into one. Seen in 3-D, each image is relegated to an eye: Ivitch on the right, Davidson on the left, leaving viewers to “cut” between them by keeping one eye closed and the other open. (David Ehrlich, reviewing the film for The Dissolve, called it a “choose your own adventure” device.) It’s montage taken to its logical extreme: in-eye editing.

This isn’t simply a great shot—it’s a new kind of shot altogether. The technique was devised by Godard’s director of photography, Fabrice Aragno. In an interview with Filmmaker earlier this year, Aragno explains that in his experiments with the 3-D format, he built a custom rig that could hold two Flip Mino video cameras:

I made a couple of tests with friends at their home of a boy and a girl… I asked the boy to go to the kitchen on my right, and the right camera followed him and the left stayed, so the 3-D broke. The girl is in your left eyes and the boy on the right. When he was in the kitchen, your brain didn’t know how to watch. It hurts to watch a little, but it was interesting, and when the boy comes back to the girl, the two cameras were again in classic 3-D.

Aragno proposed this method of separation and division to Godard, who embraced it eagerly. (The shot recurs, almost identically, in the second half of the film, this time of a different couple walking away from each other in their home.)

The notion of the divided image isn’t entirely without precedent; in a sense, it’s as old as the 3-D movie itself. The first 3-D feature ever screened for a paying audience was Nat G. Deverich and Harry K. Fairall’s The Power Of Love, from 1922, a red/green anaglyph film that made use of a dual-camera, dual-projector system developed by the producer. Now presumed lost, the film reportedly gave audiences the option to view one of two different endings simultaneously: a red-tinted happy ending in one eye and a green-tinted tragic ending in the other. It was a novel idea, to be sure, but one that didn’t endure—in part because 3-D was popularized during the sound era, when competing endings wouldn’t have been technically possible.

Godard, something of a film historian himself, was likely aware of the dual-image concept advanced by The Power Of Love, even if he wasn’t conscious of its influence. In any event, the technique as practiced by Goodbye To Language differs in two important respects. The first and most obvious is the image’s uncoupling and recoupling, which as Godard and Aragno manage it, elevates a conceptual innovation to the level of technical feat and creative triumph; another filmmaker might have thought to use the two planes of a 3-D image to show two things at once, but doing so in such a manner that they could be seamlessly reintegrated is an achievement of another order. (A colleague likened it to an elaborate skateboarding trick: Impressive as it’s happening, but only truly sensational once it’s safely landed.)

The other, more significant distinction is that Godard’s shot bears philosophical import. In 1987’s King Lear, Godard spoke of an image as “a reconciliation of two realities,” and at the time, he only meant it figuratively: two ideas linked in a shot would produce an image. “A shot of a person in a chair is an image of a person and an image of a chair,” Richard Brody explains of Godard’s theory in The New Yorker, just as “one of a person in the street shows the person and the street.” In a way, this has been the object of Godard’s cinema from the beginning. What is the jump cut, his most lasting contribution to the motion picture, if not an attempt to join one image with another in a new, more provocative way? The same can be said of his less-recognized innovations: the frame-by-frame video slow-downs of Numéro Deux and Every Man For Himself; the elaborate collages and layerings of Histoire(s) Du Cinéma. He’s been searching for a way to unify ideas—to join disparate images to create a new one. This shot is the realization.

The upshot for us is that the vocabulary of the cinema has been enriched. There is a new tool available to filmmakers: a new technique, like the jump cut before it. But the shot is also a sort of gauntlet that’s been thrown down, leaving everyone else to do something about it. Amusingly, 3-D has come to seem stifling over the past several years, as it’s spread through studio tentpoles like an infestation. And here it is reinvigorating the avant-garde. I’d like to think that however feebly Goodbye To Language penetrates the popular imagination—which doesn’t have much time for post-’68 Godard, alas—its most striking innovation will worm its way in there surreptitiously. (It’s happened before: The influence of the Breathless jump-cut continues to loom over contemporary filmmaking, and even the editing techniques he advanced through the 1970s and 1980s heralded the now-ubiquitous video essay.) Godard put himself on the bleeding edge of 3-D with a few hundred dollars in consumer-grade equipment; imagine what a blockbuster could do if it took 3-D farther down the path this film cleared.

That possible technical revolution aside, though, the shot remains something special. It’s important to remember that for Godard, these kinds of formal innovations aren’t merely vehicles for ideas; they often are the ideas. Goodbye To Language’s divided image is remarkable as pure spectacle: It shows us the world in a way we’ve never seen it before, and it ought to be celebrated for that. But it also affords us an opportunity to reflect upon our relationship with the image. Doubtless no one explanation will suffice, and I won’t attempt to explain what it all means. I will say that it put me in mind of Nabokov’s Transparent Things: “When we concentrate on a material object, whatever its situation, the very act of attention may lead to our involuntarily sinking into the history of that object. Novices must learn to skim over matter if they want matter to stay at the exact level of the moment. Transparent things, through which the past shines!” Everything we look at is both the thing and the thing we see through it. Goodbye to Language shows us both.