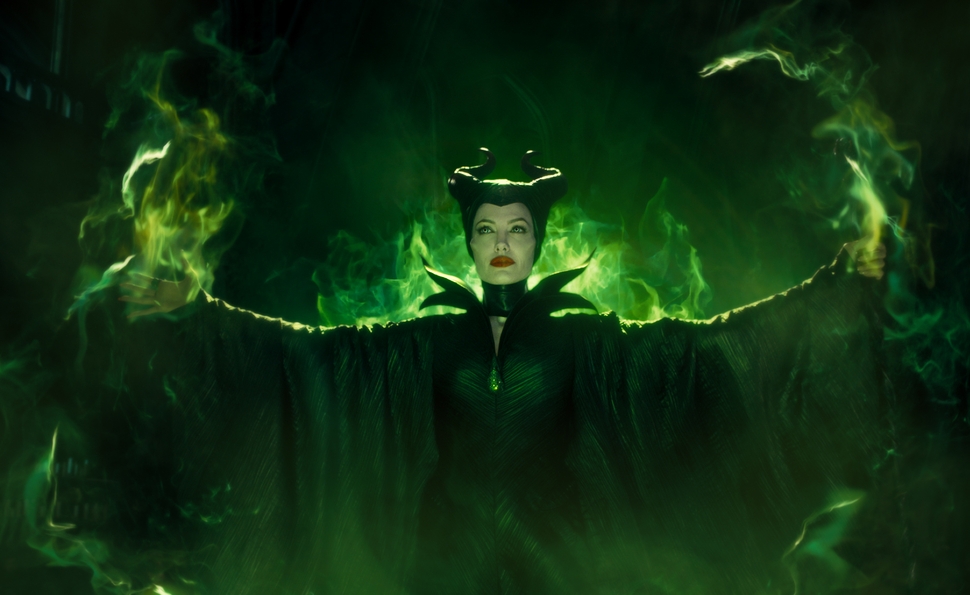 In One Year Later, we look back at the most hyped and heavily discussed movie of this month one year ago, consider its reception at that time, and examine how it holds up today, free of expectations.

First-time director Robert Stromberg was the production designer on Oz The Great And Powerful, 2010’s Alice In Wonderland, and Avatar—all films with a garishly verdant, artificial world-of-wonder gloss. Maleficent follows closely in their visual footsteps, to the degree that its glowing CGI Moors, packed with flitting fairies and Brian Froud-esque creations, should just be called The Uncanny Valley. Throw in the battle between tree-monsters and humans (which might as well be ents and orcs), and it looks like every fantasy film since the first Lord Of The Rings, but with the color-saturation knobs cranked way up. In its worst moments, as when teenage Aurora (Elle Fanning) first meets teenage Prince Phillip (Brenton Thwaites), nothing about the film looks convincing—the costumes, makeup, hair, setting, and lighting are all one big plastic package. But when the camera finds Jolie in repose, in her demonic horns and fetish-model makeup—that’s when the film finds its primal fairy-tale place, by making her strikingly beautiful, and alien, yet familiar. —Tasha Robinson

This is a film of Hollywood storytelling cliches, including the eat-your-cake-and-have-it-too villain death that lets the heroine seem noble while still satisfying the audience’s bloodlust. But it’s also a film of resonant gestures and dream logic, in which ancient and contemporary predicaments jostle against each other: romantic betrayal or sexual assault, and their psychological aftermath; the fundamental differences between male and female minds; the way that patriarchal culture fuses women’s sense of self-worth to their bodies; even the tangled maternal impulses that independent single women who never wanted kids might experience when they have to care for a child. The movie is a mess, but it’s a rich mess. It has weight. It matters. —Matt Zoller Seitz, RogerEbert.com

Except for Angelina Jolie, exemplary as the fairy badmother who laid a narcotic curse on an infant princess, this pricey live-action drama is a dismaying botch. Robert Stromberg, the expert draftsman in his debut as director, has no mastery of casting and guiding actors, little sense of narrative pace or build and—the big, sad surprise—a leaden sense of visualizing Maleficent’s fairyland. Full of spells and transformations, the movie couldn’t be less magical. —Richard Corliss, Time

The Internet is an echo chamber that tends to amplify and endlessly confirm its own opinions, but often doesn’t reflect majority opinion. That’s been proved again and again, but it can still be startling to see how far Internet-reality is from real-reality. When Walt Disney Pictures announced its intention to celebrate the 55th anniversary of Sleeping Beauty with a live-action prequel/revision, online reaction was contemptuous and vitriolic. The accusations flew: Disney was messing with viewers’ childhood memories, Disney was consciously exploiting its fans’ nostalgia for cash, Disney was out of ideas and revealing its own laziness. 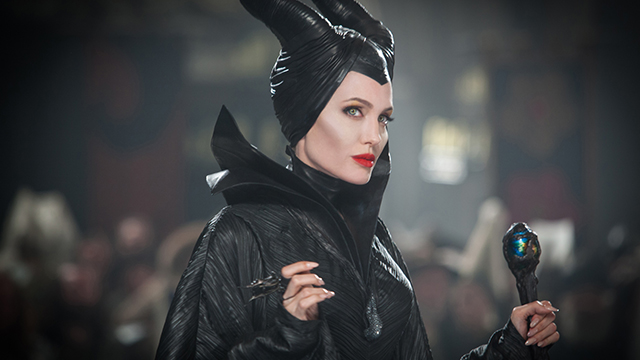 But the roiling wave of dissatisfaction and resentment, like so many Internet kerfuffles, turned into foam when it hit the shore of actual reality: For all the worrying and complaining online—and all the accusations that Disney was basically ripping off another highly financially successful prequel/revision, Wicked—Maleficent became a $750 million worldwide smash hit, playing in American theaters nonstop for half of 2014. If moviegoers shared the widely dispersed belief that filling in the backstory of the animated Sleeping Beauty’s mysterious villain was spoiling her, they didn’t let that keep them out of theaters. Just like Tim Burton’s 2010 Alice In Wonderland, which now feels like the advance scout for a wave of Disney live-action retreads, Maleficent suggested a bottomless worldwide appetite for Disney films done bigger, louder, and at a much higher price point.

Still, before the money started rolling in, the early cultural conversation over the film revolved around Disney’s cynical attempts to turn its own visually simple, elegant 1959 animated film into an outsized, CGI-heavy fantasy, yet another grim-’n’-gritty follower in the vast series of features trying to take advantage of Lord Of The Rings’ popularity. When Walt Disney Studios Chairman Alan Horn made an unfortunate statement about his plans for many more “brand deposit” Disney films—movies that actively boost the company’s profile, largely by turning the company into an ouroboros eternally gnawing on its own tail—the sullen theorizing felt justified by provable fact. It’s a simple truth of Hollywood business that studios, producers, and marketers need to think of films as products first and art second (if at all), but any blatant, open acknowledgement of that truth gets the cinematic cognoscenti riled. Films are, at best, beautiful illusions, and it’s hard to maintain that illusion when the money-men are crowing about growing the business through optimal brand-extension strategies like Maleficent.

Once the film actually came out, to highly mixed reviews, the conversation shifted. It became less about brand deposits, and more about the film’s open messages of female empowerment and friendship, in the wake of male betrayal and obsession. The clear rape metaphor, as the powerful fairy Maleficent (Angelina Jolie) gets drugged and mutilated in her sleep by a man she loves and trusts, was particularly divisive, and led the conversation about Disney’s intentions in turning a children’s story into one more oriented toward adults.

The funniest thing about that conversation? As blatant as the situation was, and as much as it tapped into 2014’s seemingly nonstop headlines about high-school and college rapes and cover-ups, culture writers seemed hesitant to admit that they’d seen a symbolic rape. Plenty of the thinkpieces around the sequence came with dubious question marks, until Jolie spelled it all out herself. That initial hesitance was fascinating—it makes sense that no one wanted to be accused of reading too much into a Disney movie. But just as the scene mirrored what was going on in the news, the response to it mirrored what was going on in the culture, as the public, the police, and the American legal system grappled with who and what they wanted to believe around high-profile situations like the Steubenville and Torrington rape cases. 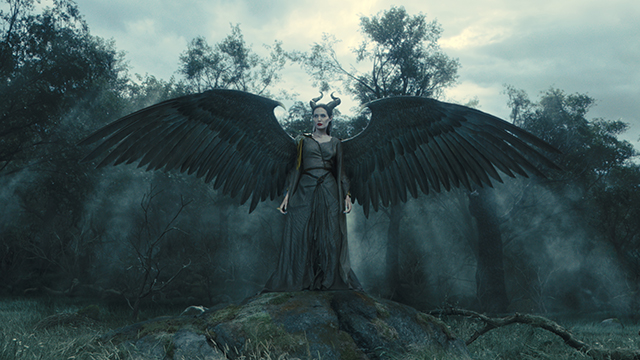 Fairy tales have long carried dark symbolism and implications of sexual violence, and writers seem to need to rediscover that every generation, as they grow up enough to understand what all those childhood fantasies about girls being swallowed by wolves and beauties being captured by beasts really meant. But the metaphorical rape aside, there was still a lot of shock and debate over the blatant gender reversal in Maleficent, which felt like another pointed corrective to decades of female villains ultimately slaughtered by bland male heroes in Disney movies. Maybe it’s even too pointed: It’s fairly uncompromising in its “women good, men bad; friendship good, sex bad” equation. It was hailed (and angrily rejected in some quarters) as a “feminist retelling,” but it goes further than female empowerment: This is a story where all the evil ultimately derives from two grasping, greedy, hateful men, and their sense of entitlement.

Maleficent’s revisionism was a pot-stirrer and thinkpiece-launcher, but as a storytelling choice, it suddenly looks much stronger in the wake of Disney’s follow-up live-action ouroboros, 2015’s Cinderella. Kenneth Branagh’s retelling of Disney’s 1950 animated film is slavishly loyal, apart from eliminating the songs and talking animals, and undermining any sense of agency or personality Cinderella ever had. Maleficent has its lumpiness and its flaws, but at least it has a point of view, and it tells a story that hasn’t been told before. It has some daring storytelling surprises. Screenwriter Linda Woolverton, who also scripted Burton’s Alice, gives Maleficent some coy, puckish lines that echo the original character’s purring malice. But the film is at its strongest when she lets the action speak for itself, in dialogue-light sequences where a furious, wounded Maleficent embraces her power and creates herself a throne and a queenship, or battles her one-time love Stefan (District 9’s Sharlto Copley) in a grim final throwdown. 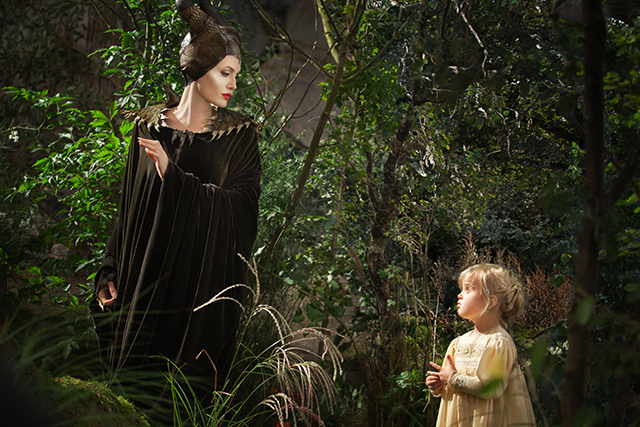 But what consistently works best about Maleficent is Jolie’s primal take on the character. Done up in glowing eyes, artificial cheekbones, intimidating horns, and beating wings, she already looks like a wild beast before she says or does a thing. She brings a stillness to the role that feels particularly animalistic, as she pauses before taking action, or orders Stefan or her new underlings to kneel with a slight eye movement, or tilts her head just slightly as she considers how the world has changed, and how she’s changing it. She’s regal and thoroughly inhuman—elements Jolie has brought, not always appropriately to other roles. Here, she sells everything about Maleficent’s innocence, pride, anger, grief, and eventually love in a way that feels far more real than all the CGI around her.

What doesn’t hold up

Oh, that CGI. It starts with a series of videogame-esque zooms over the artificial world of the Moors, the magical land where Maleficent lives. It piles up in dreary fight scenes that openly evoke Peter Jackson’s Lord Of The Rings by sending armored men against digital monsters in a blur of action. It compresses talented actors Imelda Staunton, Juno Temple, and Lesley Manville into the unconvincing, eerie bodies of flapping pixies. So many of the digital effects in this movie looked dated even when it hit the theaters, and it’s already aging badly. What so many LOTR followers miss is the importance of physical locations and a sense of concrete reality. Here, the whole world is an overlit, too-shiny bauble full of cartoon critters, until it finally goes dark. It’s just an ugly place to be stuck in, even for 90 minutes. 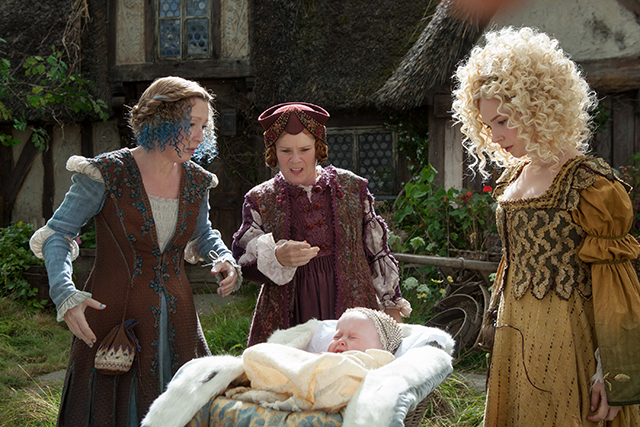 And the performances and scripting that don’t revolve around Jolie have a similar more-is-more aesthetic. The three good fairies, with their sloppy physical comedy and whining, lose any sense of the nobility of the trio in the original animated movie. Stefan is a non-entity, a big symbolic glower without a person behind it. The narration is painfully heavy-handed. And the romance between Stefan’s daughter Aurora (Elle Fanning) and Prince Phillip (Brenton Thwaites) is meant to be a bit simpering, since it’s later proved to be something less than True Love, but it oversells the simper.

Maleficent has its major problems, and they all seem to come from the same source: the problem of a studios seeing a film more as a brand extension and market-driver than anything else. At the same time, it has some intensely personal emotions behind it, and some genuine love for the source material. It’s a strange blend of calculation, trend-following, and rote blockbuster filmmaking with passion and subversion. It feels cluttered and confused at times because it’s pulling in so many directions, and trying to meet so many needs. But at least it’s ambitious, and it’s trying for a point of view.

Still, with a whole slew of wearying, guaranteed-bombastic live-action remakes of classic Disney films now on the release docket—Jon Favreau directing The Jungle Book, Tim Burton directing Dumbo, Bill Condon directing Beauty And The Beast, Alex Ross Perry writing a grown-up Winnie The Pooh, Elizabeth Martin and Lauren Hynek writing Mulan—Maleficent at this point barely feels like a film in its own right. It’s started to look more like the best of a bad trend, or like a very slippery stepping stone in the middle of a sharply pitched slope. It’s a step up from the eye-hurting garishness of Burton’s Alice, or the bland eye-candy and regressive messages of Branagh’s Cinderella. But all three films together represent a dangerous trend for Disney, away from the creative expression and freedom of their current animated films, and into a place of perpetual regurgitation of familiar titles in mangled new forms.

Next time: The Fault In Our Stars