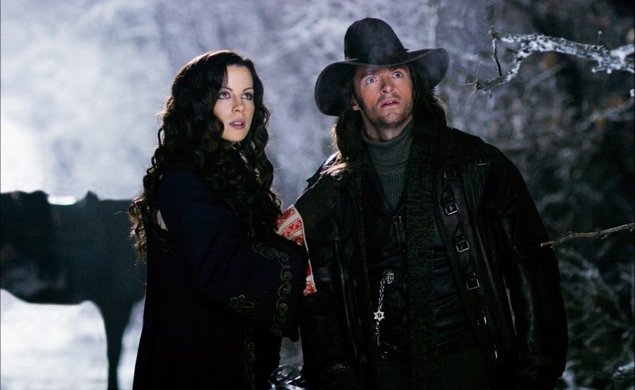 When writer/producers Roberto Orci and Alex Kurtzman, the brains behind such films as Cowboys & Aliens and Star Trek Into Darkness, signed a first-look deal with Universal Pictures in the spring of 2012, the studio handed the duo some of its most iconic horror titles with instructions to give them a “re-imagining.” The projects included a new version of The Mummy, and a reboot of the greatest and most iconic Universal monster title of them all: 2004’s Van Helsing starring Hugh Jackman as a man who hunts vampires with the help of the Sorting Hat from Harry Potter. (Note: I haven’t seen the movie since 2004, so I’m basing that plot synopsis entirely on the picture above.)

Plans have been progressing on both projects; just recently, The Hollywood Reporter announced that Mama director Andres Muschietti would take the reins of The Mummy remake remake. Now, in an interview at IGN, Orci teased a provocative development in these films: that they, and presumably a whole lot of other Universal monsters like Frankstein and Dracula, could become part of a single “universe,” a la the films of Marvel Comics.

Here’s his quote, via Coming Soon:

“There’s an interesting thing that could happen at Universal where they have this amazing library of their old monsters and these kinds of heroes, and the idea of trying to create a universe. Van Helsing, and we’re also producing The Mummy for them. We’re kind of imagining updating these kinds of things. You don’t want to just make remakes when you’re doing a thing, unless it’s worthy of being a remake, but when you have an idea for something that can actually be made different and yet be true to what it was. We just had a notion of how to make it modern and have a slightly different tone. It’s not going to be just a remake.”

While the idea of a Universal Monsters “universe” sounds like it was stolen directly from Marvel, it actually exists in the original Universal horror movies as well. Although the Frankenstein and Dracula series started off separately, they later merged after the studio had creatively exhausted the various characters by themselves. The combinations began with 1943’s Frankenstein Meets The Wolf Man—which, as one of the first films to partner two separate franchises, might be one of the most quietly influential movies in history—and continued through House Of Frankenstein and House Of Dracula. So this is a new version of an old idea for new versions of old movies. Hollywood, y’all.