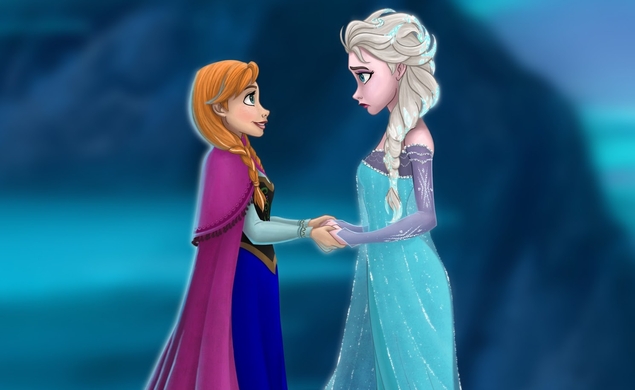 While ramping up promotional efforts last week on its next animated feature, Frozen, Disney invited several bloggers to look at footage and listen to the creative team talk about making the film. One of those present was production head of animation Lino DiSalvo, who began his Disney career as an animator on 1999’s live-action Inspector Gadget and 2000’s 102 Dalmatians. By 2010’s Rapunzel riff Tangled, DiSalvo had worked his way up to supervising animator, helping both Maximus the horse and Pascal the chameleon realize their full comic potential.

From a 2011 interview, it’s known that DiSalvo likes to act out whatever character’s been assigned to him, bringing his home movies to the director for approval on blocking, movements, and other animation details. Discussing Frozen, he said he brought in cast member Idina Menzel, who spoke before the 60 animators working on her character Elsa, to help get them all on the same page. He told the bloggers that meanwhile, he’d “moderate like a Inside The Actors Studio.”

What DiSalvo said next got the Internet’s attention. “Historically speaking, animating female characters are really, really difficult, ’cause they have to go through these range of emotions, but they’re very, very—you have to keep them pretty and they’re very sensitive to—you can get them off a model very quickly,” he said. “So having a film with two hero female characters was really tough, and having them both in the scene and look very different if they’re echoing the same expression; that Elsa looking angry looks different from Anna [Kristen Bell’s character] being angry.”

The quote made the Internet rounds for quick condemnation. However DiSalvo intended his comment, it sounds like he wasn’t describing a (solely) personal problem with animating all women, but (inadvertently?) detailing the problems of ticking off whatever checkboxes are in place for a conventionally pretty Disney female character fulfilling the usual spunky/elegant princess template. Neither he nor the studio have issued any follow-up statement.