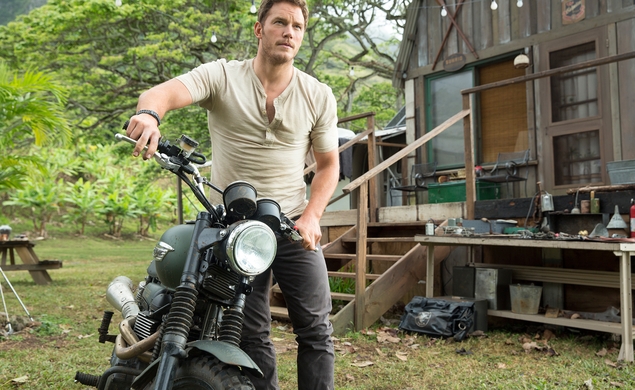 Under the impression that I was the last carbon-based life form on Earth who had not yet seen Jurassic World, I caved this weekend and bought a ticket to the highly successful meditation on man’s scientific hubris and the thrilling logistics of theme-park maintenance. I was way off, however; even as the film rolled through its fourth week of release, the theater was nearly at capacity, and this was not an anomaly across the nation. Jurassic World took the top spot at the box office over Independence Day weekend—indeed, what could possibly be more American than ignoring the best warnings of educated minds and attempting to resolve a nuanced situation with violent conflict regardless?—with a haul just shy of $31 million, kicking the film’s grosses up to $558 million and maintaining its supremacy over new releases. There’s plenty of year left, and big upcoming releases such as Star Wars: 7 and Hunger Games 3: 2 may very well dethrone Jurassic World. But for now, the film’s suggestion that modern audiences find dinosaurs blasé and boring holds a deep irony. Viewers can’t get enough of those giant lizard monsters. (Or maybe we’re underestimating a late push of support from the rabid Lauren Lapkus fandom. Who knows.)

Juggernauts continued to jugg’ with Disney’s Inside Out maintaining its grip on the second-place spot. Flaunting a $30.1 million weekend, the film played like gangbusters to parents desperate for an hour and a half of relative silence during this long weekend. Or maybe non-children heard how good the film is and decided to go see it based on strong word-of-mouth! That’s still how the film industry works, right? Either way, Disney executives probably aren’t losing any sleep over the “why,” choosing instead to rejoice over the “how much.” Another strong showing from Inside Out pushed Disney’s year-to-date grosses over the $3 billion mark worldwide, which marks the earliest point in the year that Disney has ever hit that target. Huge contributions from Avengers: Age Of Ultron and Inside Out bolstered the House of Mouse, their global draw breaking the $3 billion record on June 30, more than a full month ahead of last year’s milestone on August 5. Someone’s getting Pete Docter a gold watch.

New films stumbled this weekend. Their senses dulled by a few too many brewskis at nationwide Fourth of July BBQs, Terminator: Genisys and Magic Mike XXL settled in the third and fourth spots with $28.7 and $11.6 million respectively. Though Magic Mike 30 (I’m a little rusty with my Roman numerals—have we really already had 29 of these things?) certainly generated the most noise on social media this weekend, audiences busy observing the holiday couldn’t sneak away from family to go get their cinematic rocks off. Tymynatyr: Genisys delivered a fine showing internationally, however, raking in $85.5 million for the number-one spot globally. Minions, slated to screech its way into American theaters on Friday, took second place. Like a blood-red sky or plague of locusts devouring our precious crops, the overseas box-office domination of Minions arrives like a portent of dark events to come.

Mad Max: Fury Road furiously followed the road out of the top 10, slipping to number 11 for the first time since its release eight weeks ago. The film has turned around over $358 million on a $150 million budget, a resounding triumph for directorial authority and originality of vision. Surely, this will convince studio higher-ups that there’s plenty of money to be made in allowing auteurs to realize their passion projects. Or, equally possibly, that the world needs more Mad Max sequels.

Ted 2 and Max (a.k.a. American Dog Sniper) hung tough over the weekend, slipping to fifth and sixth from last week’s third and fourth spots, respectively. Ted 2 fell just short of Magic Mike XXL, drawing $11 million to the male stripping showcase’s $11.6 million. This weekend’s major releases are the aforementioned encroaching menace of Minions, the Ben Kingsley/Ryan Reynolds sci-fi thriller Self/Less, and horror flick The Gallows. Will any of them be able to finally overtake Jurassic World? Well, as they say in Minionese, “Karala maal papaya foro febista!” (This translates roughly as, “No consumer demographic is more susceptible to aggressive branding efforts than children!”)