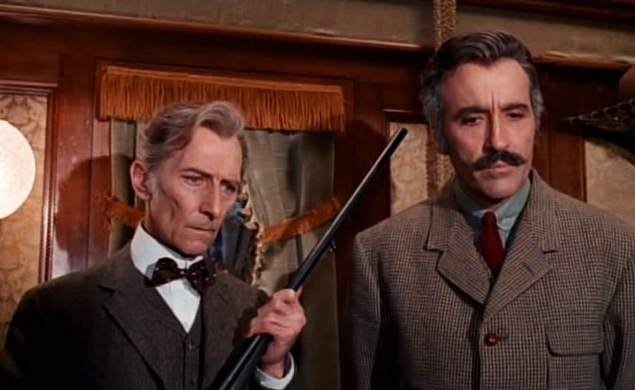 This evening, Turner Classic Movies is turning its spotlight on Hollywood biopics, but until 8 p.m. the channel is saluting the late Christopher Lee, whose life would make for a thrilling biopic in its own right. The eight-film marathon started at 6:15 a.m. Eastern with Hammer’s version of The Mummy, and when this article goes live there will only be about 20 minutes left to go in The Curse Of Frankenstein (the first time the studio paired Lee with Peter Cushing), but there’s still a chance to see the iconic actor take on what became his signature role in Horror Of Dracula, airing at 9:30 a.m. That’s followed by two of its sequels—1966’s Dracula: Prince Of Darkness at 11 a.m. and 1968’s Dracula Has Risen From The Grave at 12:45 p.m.—and the end of the block is being filled by Richard Lester’s The Three Musketeers (4 p.m.) and The Four Musketeers (6 p.m.), in which Lee played the villainous Rochefort. Sandwiched in between them, though, is one of the few films from the period where he got to be a good guy.

Made in 1972, Horror Express teamed Lee up with Cushing yet again and put them on the Trans-Siberian Express circa 1906. Initially less than chummy, the two gents put aside their differences and join forces when the fossilized ape-like creature Lee’s anthropologist found in Manchuria (and which he believes may be the missing link) starts picking off their fellow passengers. It’s a film that keeps ramping up the absurdity as it goes along—just wait for Telly Savalas to show up as the “one honest Cossack” who believes he can get to the bottom of things—but by this time Lee and Cushing were old pros at elevating even the hokiest material. To see them at the peak of their powers, climb aboard the Horror Express at 2:30 p.m. on TCM.