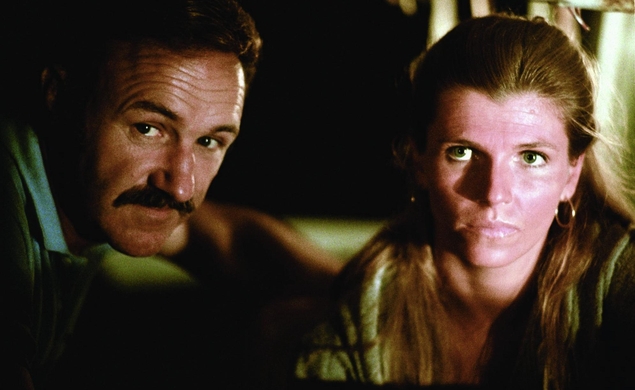 The one-sentence plot description for Night Moves on TCM’s site makes it sound like a much different movie: “An L.A. private detective puts aside his own marital woes while tracing a topless nymphet to the Florida Keys.” While there’s nothing literally wrong with that, it suggests a much more lighthearted film than the one Arthur Penn delivered in 1975. Gene Hackman plays private eye Harry Moseby, a former football player who’s drifted into his current career less because of any great aptitude than out of a need for something to do. Susan Clark plays his unfaithful wife. And Melanie Griffith plays the topless nymphet, Delly, whose disappearance takes Harry from L.A. to New Mexico to Florida. But there’s really no putting aside Harry’s marital woes, which hang over a film whose labyrinthine plot keeps finding variations on the theme of infidelity and betrayal. Always the ideal person to play the gruff and the disillusioned, Hackman’s excellent as the lead, and Penn’s in full command of his film’s effect. The film has picked up a following over the years after underperforming at the box office, and famously produced the two-sentence dismissal that turned up in most obituaries for Eric Rohmer: “I saw a Rohmer film once. It was kind of like watching paint dry.” But as critic Bruce Jackson has pointed out, Night Moves may not bear much superficial resemblance to My Night At Maud’s, the film Harry is opting out of seeing, but its concern with morality and compromise run just as deep. Night Moves runs deep in the night at 3:30 a.m. Eastern, Friday on TCM.