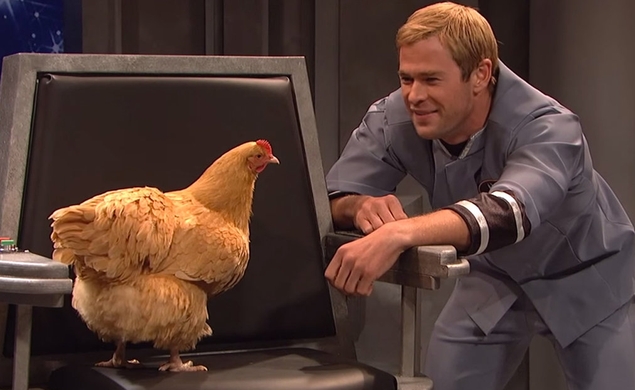 (Screams into a pillow.)

Paul Feig’s upcoming lady-centric Ghostbusters—or, you know what, just “Paul Feig’s upcoming Ghostbusters”—has pretty much knocked it out of the park with casting already, subverting loud calls to “just cast Tina and Amy and whoever else is around,” instead opting to recruit Kristen Wiig, Melissa McCarthy, Leslie Jones, and Kate McKinnon to answer the call. (For people who don’t watch Saturday Night Live, a strange section of the population that my SNL-addled brain can barely fathom, I assure you, Jones is quite funny, and McKinnon is truly a star in the making.) That casting news came down the slime-covered pipe way back in January, and since then, we haven’t heard much about who else was joining the ghost-busting party.

It was so worth the wait.

Feig himself took to Twitter to announce the casting of the receptionist role (a part originally played by the dizzily wonderful Annie Potts), and it is really nothing short of brilliant. It’s Chris Hemsworth.

Who are we gonna call? I guess we are literally going to call Chris Hemsworth, because he is the one who will be picking up the phone in the newest iteration of firehouse/headquarters/best place in the entire world. Shut it down, world, this is the best casting of the year.

Hemsworth has been beefing up his comedic endeavors as of late, including an upcoming turn in Vacation (small, film-going birds who have seen the new reboot/requel/rewhatever have whispered in my ear that he steals the show, and also who is letting birds into movies now?) and a hosting gig on this past season of Saturday Night Live, where he wasn’t just funny (and also funny with McKinnon and Jones), but also funny while romancing a chicken. The guy is funny! His self-serious turn as Thor in the MCU movies has also proven to be successful, and if Chris Hemsworth wants to be funny, who are we to stop him?

But this all leaves one question: Who is going to be his Louise Tully? We nominate Tina or Amy or whoever else is around. (What? This is a hard habit to break.)