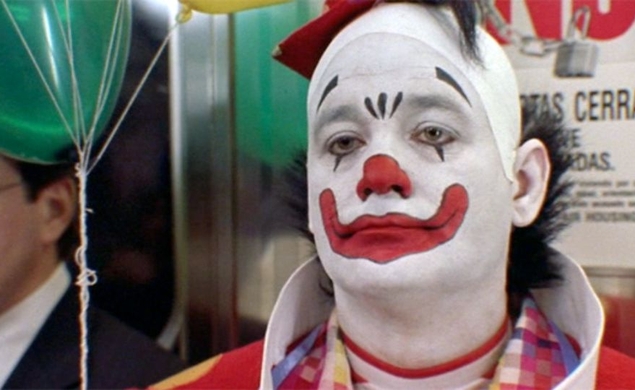 “What the hell kind of clown are you?” “The crying-on-the-inside type, I guess.” So quips Bill Murray’s disguised bank robber to a security guard in the winning 1990 comedy Quick Change, one of the only films he ever directed (in this case co-directed, with Howard Franklin), which makes sense, given how much that line is a thesis statement for a career built on comic melancholy. The particular genius of Quick Change’s robbery scheme is that Murray’s Grimm wants to collect a million dollars for the sole purpose of getting out of New York City, but once he pulls off the bank heist, the city refuses to let him go. Instead, Grimm and a couple of other hostages (Geena Davis and Randy Quaid) are stuck in a daylight version of Martin Scorsese’s After Hours, where the citizens and the crumbling infrastructure conspire to thwart his efforts to get to the airport. When he tries to ask construction workers if they’re putting up new signs with directions to the BQE, they shrug, “Not today. Today’s just for taking shit down.” A wealth of character actors turn up to cause problems—Jason Robards, Phil Hartman, Victor Argo, Stanley Tucci, and Tony Shalhoub among them—and the film takes his irreverent comic premise as far it will go. And though it slides a bit after the robbery scenes, Quick Change is a bilious ode to New York City that, in the classic Murray style, also doubles as down-to-earth love letter. He can’t leave the city, but then again, he could never leave the city. The film airs tonight at 6:30 p.m. on Starz Comedy.