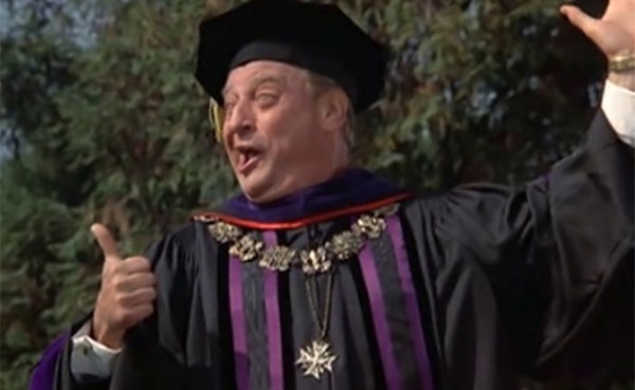 As a change of pace after his roles in the raucous, R-rated comedies Caddyshack and Easy Money, Rodney Dangerfield went in a more family-friendly direction with his next starring vehicle, 1986’s Back To School. Boasting a screenplay co-written by Harold Ramis, Dangerfield’s first PG-13 film took the can’t-miss premise of casting him as a self-made millionaire who enrolls in college in an effort to bond with his son and dove right into it. While the heart of the film is Dangerfield’s relationship with his son (played by Keith Gordon), who’s ambivalent about being the scion of the mastermind behind the “Tall & Fat” clothing-store chain, Back To School mines its biggest laughs from the straight-shooting businessman’s interactions with the faculty, especially his uber-snooty economics professor (Paxton Whitehead) and volatile history teacher (a perfectly cast Sam Kinison). Also on hand are Sally Kellerman as Dangerfield’s unlikely love interest, Robert Downey Jr. as Gordon’s anarchist best friend, M. Emmet Walsh as the school’s opportunistic swim coach, and Ned Beatty as its accommodating dean, with memorable cameos by Kurt Vonnegut as himself and the band Oingo Boingo, whose lead singer Danny Elfman composed the film’s sprightly score, which pairs well with the one he wrote for Pee-wee’s Big Adventure the year before. Summer may be just around the corner, but there’s still time to go Back To School at 5:45 p.m. Eastern on HBO2.