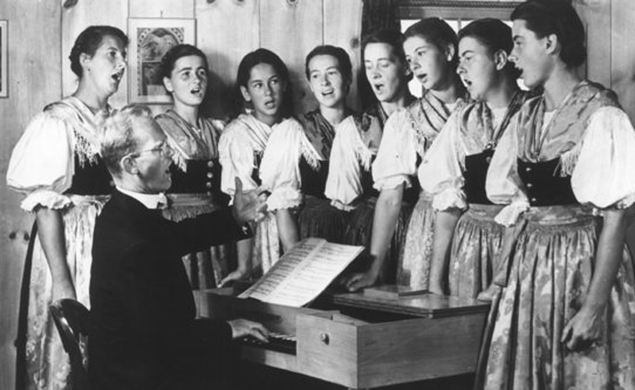 Anybody who’s learned the proper notation for solfege singing probably has The Sound Of Music to thank. The children’s music lessons of “Do Re Mi” in the Julie Andrews-led Sound of Music film have charmed generations of families since its release in 1965. Most folks are aware that Robert Wise’s film was adapted from the Rodgers and Hammerstein musical of the same name. But not as many people know that that musical was adapted from a West German comedy picture called The Trapp Family, or that that film was based on a memoir called The Story Of The Trapp Family Singers, which, like most memoirs, was based on real life.

The new Ben Verbong film The Von Trapp Family—A Life Of Music jumps in at that penultimate level, drawing from the source material of Agathe von Trapp’s autobiography Memories Before And After The Sound Of Music. Like her book, the film delves into the story behind the sweetly chaste showtunes and explores the dynamic in the all-too-real family that stood strong against the Nazis.

“But wait!” I can hear the diehards among us saying, “I’ve never noticed any character named Agathe in my 14 viewings of The Sound Of Music!” And you’d be right. The character of Liesl was loosely based on Agathe, with a change of name. But Agathe shall appear in her true form for A Life Of Music, with English actress Eliza Bennett portraying the young woman’s struggle to develop her gift for singing while the nefarious seedlings of fascism take root in Europe. All the while, she’s coping with her strained relationship with her father Georg and stepmother Maria (who, sadly but understandably, shall not be played by Julie Andrews but by Yvonne Catterfeld).

This German import made headlines on Deadline today because Lionsgate has swept up domestic distribution rights for the picture, which is projected to arrive on our fair shores around Christmas of this year. It’ll surely be a hit among people who watch The Sound Of Music for the complex interlocking family dynamics. Forget Julie Andrews, and forget Rodgers and Hammerstein’s score! Agathe is our new star!