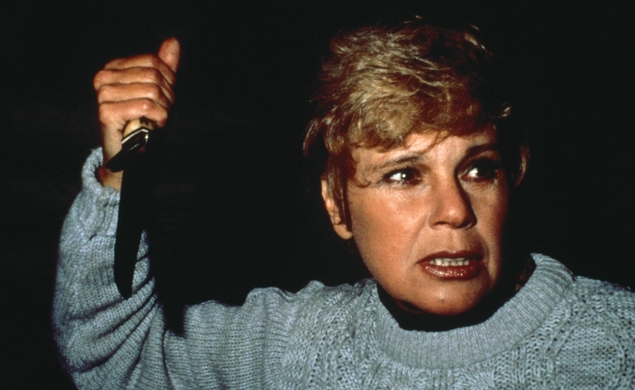 With one simple line, Betsy Palmer carved her way into the horror canon. While Jason, the hockey-mask-wearing immortal killer of camp counselors remains the Friday The 13th series mascot, it’s his mother, Pamela Voorhees, played with unabandoned histrionics by Betsy Palmer, who engendered the series and set the standard—with help from Tom Savini’s DIY gore effects, and Kevin Bacon’s pasty throat—upon which all subsequent slasher films would build. Even her utterance of “Kill her, mommy,” became the seed for the series’ leitmotif, the “ki-ki-ki ha-ha-ha ma-ma-ma” that swells every time Jason is near. That Palmer hated the film, calling it “a piece of junk” she only took on to earn the $10,000 she needed for a new car, only makes her legacy as the original slasher mom more fascinating.

Palmer, who died on Friday at the age of 88, spent most of her early career doing television, including Kraft Theatre, Playhouse 90, and Studio One In Hollywood. Most notably, she appeared alongside Rod Steiger and Nancy Marchand (in her TV debut) in the acclaimed Philco Television Playhouse teleplay of Marty, which was filmed a year before the Oscar-winning film starring Ernest Borgnine, and is still considered superior by many Golden-Age-TV aficionados. She had an 11-year lapse between films when she signed on for Friday the 13th, earning $1,000 a day for 10 days of work, at the end of which she would wrestle with, and have her head lopped off by, a 20-something young woman.

Palmer, who had (by far) the most experience on set, brought a sense of estranged insanity to her role. Her distaste for the material helped lend an air of delusion to her performance. Her Pamela Voorhees, a grieving single mother, is still one of the only slasher movie maniacs with an actual, understandable reason for slaughtering skinny young things. Despite her misgivings regarding the campy, camp-killer movie, Palmer would eventually embrace the role:

“Being an actress who uses the Stanislavsky method, I always try to find details about my character. I began with a class ring that I remember reading in the script that she'd worn. Starting with that, I traced Pamela back to my own high school days in the early 1940s. So it’s 1944, a very conservative time, and Pamela has a steady boyfriend. They have sex—which is very bad of course—and Pamela soon gets pregnant with Jason. The father takes off and when Pamela tells her parents, they disown her because having [children] out of wedlock isn't something that good girls do. I think she took Jason and raised him the best she could, but he turned out to be a very strange boy. [She took] lots of odd jobs and one of those jobs was as a cook at a summer camp. Then Jason drowns and her whole world collapses. What were the counselors doing instead of watching Jason? They were having sex, which is the way that she got into trouble. From that point on, Pamela became very psychotic and puritanical in her attitudes as she was determined to kill all of the immoral camp counselors.”

After Friday The 13th, she returned to TV, appearing in Murder, She Wrote; Newhart; and The Love Boat. She also originated the letter-turning role on Wheel Of Fortune.