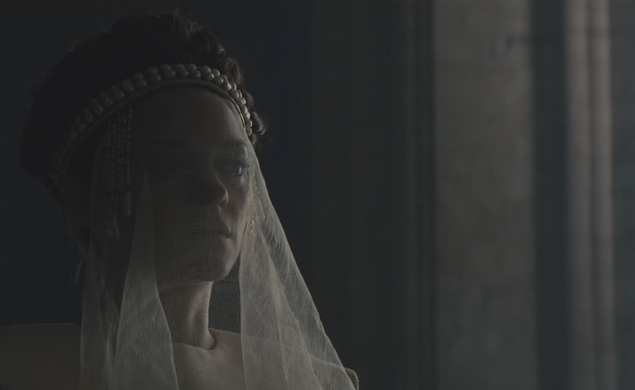 Of all of the Bard’s bloody tales, Macbeth is one of the most cinematic of the bunch, inspiring a variety of adaptations, including two certifiably great ones: Akira Kurosawa’s 1957 Throne Of Blood and Roman Polanski’s 1971 film. Kurosawa conflated Japanese ghost stories and Shakespearean tragedy, and has, to date, been the only filmmaker to re-create the scene of Birnam Wood “coming alive” without seeming a little silly. (I love Polanski’s film to death, but the tree scene is definitely not a high point.)

If his intensely gruesome Snowtown is any indication of what’s to come, Justin Kurzel was the perfect choice to helm the new Macbeth, which stars Michael Fassbender as the Scottish tyrant and Marion Cotillard as his Lady. Two new clips from the film—one of the coronation, the other of a battle—are rife with desperation, with their diffused lighting, desaturated color, and tight rhythm. Notice the way Kurzel cuts in tandem with the coronation, and how the light seems to pour down uselessly into the dark, colossal castle like futile hope. The clip’s only 30 seconds long, but they’re a really good-looking 30 seconds.

Kurzel recruited his Snowtown director of photography Adam Arkapaw to shoot Macbeth (and got Babadook composer Jed Kurzel—his brother—to write the music). Arkapaw’s work on HBO’s True Detective earned rave reviews, particularly for that six-minute Steadicam shot, and his work here, at least what we can see from these brief clips, looks great, with those medium shots of a stoic Fassbender being crowned and Lady Macbeth watching calculatingly. (Also, can you think of two better players for Macbeth and Lady Macbeth?) Kurzel and Arkapaw obviously know how to use digital photography, favoring a gloomy palette and high-contrast imagery. I was admittedly a little concerned when the ultra-slow-mo started, fearing the Zak Snyderfication of Shakespeare, but after watching the clip a few times, I dig what Kurzel’s going for, even without any context.

Macbeth will premiere at Cannes.