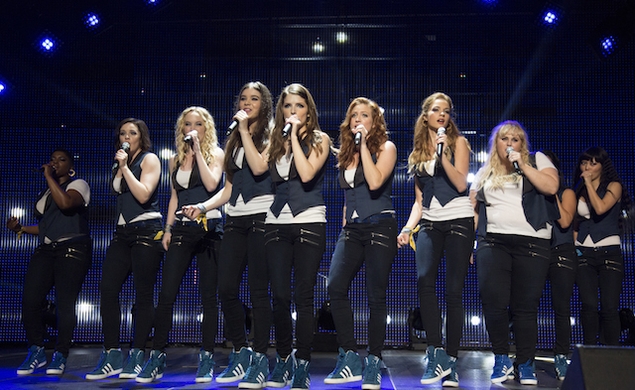 Who run the world? (The) girls (of Pitch Perfect 2). The first (of what we suspect will be many) sequel to the surprise 2012 smash hit trilled, warbled, and belted into theaters with a smashing $70.3 million debut. That massive haul wasn’t just enough to best the rest of the box-office landscape (including Mad Max: Fury Road, another highly anticipated sequel that vroomed into the cinematic landscape this weekend) and steal first place, but it also set plenty of other records along the way. To wit, this giant debut weekend opening means that Pitch Perfect 2:

1. Is the highest opening ever for a musical feature.

2. Has already out-performed the entire domestic gross of the original film ($65 million, as Pitch Perfect notably found its legs in home-video release).

3. Is the second-highest earning PG-13 comedy opening ever (behind Austin Powers Goldmember).

So, what you’re saying is, the film made money? Aca-a lot, pitches.

Banks is also believed to have logged the highest opening ever for a first-time director (a number-crunching that comes care of Deadline).

The weekend’s other big new opener, Mad Max: Fury Road, pulled into second place with a very respectable $44.4 million, making it the highest-earning Mad Max picture yet (with inflation factored in, however, the film still has a long way to go before besting Mad Max Beyond Thunderdome, which would have made a stunning $82.8 domestically, had it been released today). With stellar reviews and tons of glowing word of mouth, Fury Road will likely emerge as the series winner, at least eventually (consider this one a slow-speed chase). The film also marked star Tom Hardy’s biggest non-Christopher Nolan opener, pulling in behind The Dark Knight Rises and Inception.

In the number three spot, Avengers: Age Of Ultron crossed the $1 billion mark worldwide, though domestically, it’s still behind both The Avengers and Iron Man 3 (did you forget how popular Iron Man 3 was? I totally forgot how popular Iron Man 3 was). The film has only been in domestic theaters for just three weeks, though, so the latest offering from the MCU has plenty of time to grow, mature, think it’s a good idea to make a robot, and then have to battle that robot in order to save the human race.

The rest of the weekend’s top 10 remained mostly static, though Far From The Madding Crowd finally managed to crack the upper echelons with the addition of 190 new theaters. Now resting comfortably in the number 10 spot, the Carey Mulligan-starring period romance has now earned over $2.63 million domestically, and it’s steadily creeping up on the $10 million mark worldwide.

Although Pitch Perfect 2 also captured the best per-theater average ($20,242, which is enough to make anyone sing), the No. 2 spot belongs to charming indie I’ll See You In My Dreams. The Blythe Danner-starring feature opened in just three theaters, but made an estimated $16,333 per location. The film is a real winner (one of my favorites from Sundance), and is worth seeking out.

Next week (Memorial Day weekend!) sees the release of both the new Poltergeist (sorry about that clown) and the much-hyped Tomorrowland, but going out on a limb here, and I would guess that the Barden Bellas will still reign supreme by the time all that box office dust settles.