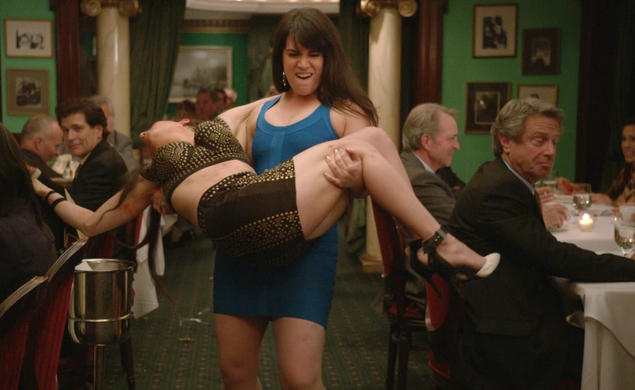 TV fanatics and people who enjoy looking at .gifs on the Internet alike have learned to love Ilana Glazer and Abbi Jacobson, the feckless, reckless, shameless creators of Comedy Central’s Broad City. As a pair of slackers with a predilection to drug-fueled shenanigans, Glazer and Jacobson have plumbed some shockingly hilarious depths in their two seasons (and exploring some shockingly literal depths in season one, episode two as well as season two, episode four). Their talents and unilateral adoration meant that it was only a matter of time until the women’s talents grew too large for the small screen.

THR noted last night that 20th Century Fox has purchased a comedy script written by the comedic duo, though neither has signed on to star in the film. Specifics on the script are scarce, with neither a title nor plot synopsis currently available. If the Dissolve News Team was a gambling-friendly organization (which, despite the nasty and completely unfounded rumors of underground cricket-fighting taking place at the Chicago offices after hours, we are not), we’d wager that it’d give a promising young female comic talent a chance to shine, just as Amy Poehler’s guidance helped get Broad City off the ground.

They’ve also teamed with a man who’s get a bit of experience when it comes to launching comedy stars: Paul Feig, who proved instrumental in Melissa McCarthy and Kristen Wiig’s ascents to stardom, has agreed to join the film as producer, though he will not direct.

Broad City’s a treat, but its creator-stars really do belong on the big screen. Enough ink has been spilt already about the sad dearth of major female talents in the world of comedy, and the gloriously dysfunctional hijinks of Glazer and Jacobson already spell “sleeper hit”.