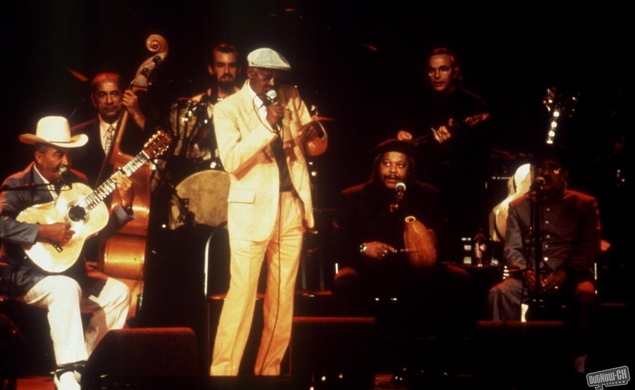 In July 1998, legendary Cuban band Buena Vista Social Club performed at Carnegie Hall in New York City. It was one of only two live performances the original line-up ever played, and Wim Wenders was there to capture it. The Oscar-nominated 1999 documentary Buena Vista Social Club helped spread the infectious rhythm of classic Cuban music to the world. Wenders’ film not only extrapolates the style’s excitement and beauty, with its swelling horns and syncopated beats, but encapsulates those brief, fleeting moments before the group did to Havana what The Beatles did to Liverpool. The film depicts a city, and in the grander scheme of things, an entire country that changes almost overnight, permeated by a revived ardor for classic Cuban music catalyzed by a merry band of old guys with guitars. The power of music has rarely been so passionately displayed onscreen.

Now Wenders’ film is getting a sequel, directed by Lucy Walker. Buena Vista Social Club—Adios will “document the personal and professional highs and lows of the five remaining original band members since their 1999 reunion tour, focusing on a new series of homecoming concerts in Havana,” The Guardian reports.

The original Buena Vista Social Club was a literal social club in Havana that specialized in Danzon, Cuban dance music, in the 1940s. Almost 50 years later, Juan de Marcos Gonzalez and American guitarist Ry Cooder created a band also called the Buena Vista Social Club, which ended up revitalizing an international interest in traditional Cuban music and giving Cuba a bustling new tourism market. The band partially comprised legendary musicians in their 80s and 90s, who were around during the original club’s heyday.

Buena Vista Social Club’s wavering cameras and gentle lighting give the concert footage the hazy glow of a sensuous dream, while the non-musical sections thrum with life. Cuba looks like a place outside of time, with its varicolored Volkswagens lining the streets, Cuban flags twisting in the wind, and omnipresent acoustic guitars, mandolins, and lauds. The juxtaposition between New York on the cusp of Y2K—the Yankees are having the greatest season in baseball up to that point; Cats is the coolest show on Broadway; pay phones are ubiquitous—and Cuba circa 1998 is jarring. Notice the fascination with John Wayne’s guns; what could be more American than a cardboard cutout of John Wayne packing pistols and selling sunglasses?