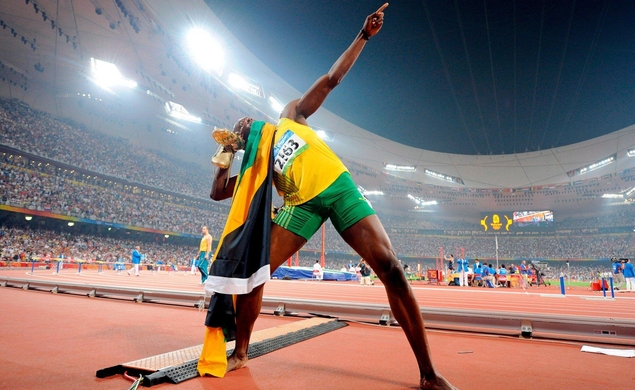 Six-time Olympic champ and proclaimed “fastest man alive” Usain Bolt will likely cross his final finish line sometime in 2017, as the sprinter has already announced his plans to retire in two years. Before that, however, Bolt has one more Olympics to attend—and, presumably, to dominate—when the summer games hit Rio in 2016. Bolt won’t be alone as he readies for the Games, though, as British filmmakers Gabe and Ben Turner (The Class Of ’92) will be hot on his heels, putting together a documentary about the Jamaican superstar.

The Hollywood Reporter shares that the pair have “announced plans to keep up with the fastest man alive in the run-up to the 2016 Rio Olympics, the games themselves and his prospective retirement in 2017,” a meaty chunk of both time and material. (Protein is important to sports, we think.)

The Turners will begin shooting the as-yet-untitled feature this May, with a specific eye toward chronicling Bolt’s training and preparation for what will most likely be his final Olympic Games. The outlet also reports that “the film will also look back on the Jamaican speedster's career, taking in the epic wins in the 100m and 200m in Beijing in 2008 and London in 2012 as well as his quite incredible performance at the World Championships in Berlin in 2009 when he clocked 9.58 seconds in the 100m.”

The Turners recently directed the 2012 documentary The Class Of ’92, which focuses on “the rise of a young David Beckham and a group of precocious young soccer players” from the Manchester United team, so they know a little something about bringing athletic stories to the big screen.

Of the doc, Bolt shared: “I’m excited to start work on this project. When I met Gabe and Ben and heard about their previous work I felt they would be the right people to tell my story and capture my journey to Rio 2016. It’s going to be a lot of fun.”

Usain Bolt’s idea of fun—you know, running—is a fair bit different than mine, but it’s nice that we presumably share a love of documentary cinema. We look forward to running right out and catching this zippy film sometime in 2017.