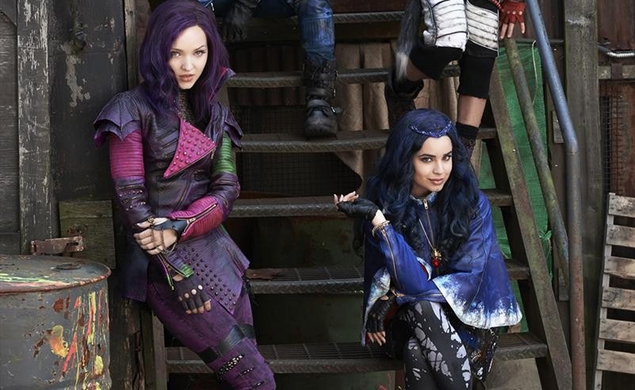 When Maleficent made more than $750 million at the box office, it reaffirmed yet again that there was a fortune to be made in finding new angles on beloved (or joyously despised) characters from Disney’s fabled history. It was one thing to constantly recycles heroes, like Alice of Alice In Wonderland fame. The savvy of Maleficent was that it proved that villains could be very lucratively recycled as well.

Thanks to similarly lucrative franchises like The Avengers, team-ups are all the rage these days. Now, the Disney Channel is introducing its own version of a supervillain team-up project, Descendants (not to be confused with The Descendants, the well-received literary adaptation directed by Alexander Payne). The film follows the progeny of some of Disney’s most notorious villains (Cruella De Vil, Maleficent, The Evil Queen, and Jafar) as they attend a prep school alongside the children of some of Disney’s greatest heroes, including the princely son of the Beauty and the Beast; Prince Chad Charming, the son of Cinderella and Prince Charming; and many other highly licensable characters.

The children of these notorious bad guys may not be evil, but they apparently have ’tude to spare. Disney’s assembled some pretty impressive performers, like Kristin Chenoweth as Maleficent (from Maleficent) and Kathy Najimy as The Evil Queen (of Snow White And The Seven Dwarfs). The film is directed by Kenny Ortega—who choreographed Dirty Dancing and directed the High School Musical trilogy—and, from a commercial standpoint, is brilliant in the way that it brings so many of the studio’s popular favorites together in one modestly priced television movie. And the school at the center’s resemblance to both Harry Potter’s Hogwarts and The X-Men’s Xavier’s School for Gifted Youngsters certainly can’t hurt, either.

It could be argued that projects like these degrade Disney’s legacy and its characters, but any company that floods the market with movies like Cinderella III: A Twist In Time (which is rumored not to be as good as the original) is willing to trade prestige for big, big bucks, in terms of advertising and ancillary revenue. Descendants offers so many opportunities for ancillary revenue that it might as well be called Synergy: The Film.