Now for a calm, rational look at Jared Leto as the Joker in Suicide Squad 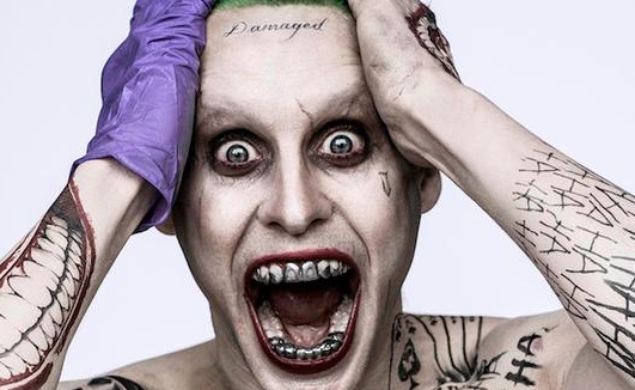 It’s been a crazy weekend. It all began on Friday night, when Suicide Squad director David Ayer took to Twitter to tease his upcoming big-screen adaptation of DC’s team of on-the-leash villains doing black-ops work for a shadowy government agency. He had posted a photo of the cast a few weeks beforehand, and raised a few eyebrows for excluding star Jared Leto from the snapshot. Perhaps Leto was busy in the makeup chair, pallid foundation being smeared all over his rippling torso. That’s what the first image of Leto’s Joker would suggest, anyway. Ayer tweeted the following photo of the former 30 Seconds to Mars frontman and Academy Award winner:

As is tradition when one of the most beloved and iconic comic-book properties is taken in a radically different direction, comic-book fans leapt onto the Internet to express their respect for the director’s artistic license, refraining from passing judgement on the film until more details came to light. And if you believe that, then I congratulate you on having stayed off of the computer for the entirety of this weekend, and I’d appreciate any tips you have for maintaining that level of self-discipline. No, the reaction was generally negative, with diehards decrying the Joker’s new look and reserving the lion’s share of knee-jerk nerd-rage for the character’s bevy of new tattoos. (And not, surprisingly, to comment on Leto’s extraordinarily small nipples.)

We at The Dissolve would like to urge rationality and calmness at this time of national crisis. Yes, tattooing the word “Damaged” on a character’s forehead may sound like the result of a challenge to convey mental instability in the most transparently obvious way possible. Yes, the skull-with-jester-hat chest piece may make the Joker look like he just got back from a regrettable road trip to Mardi Gras. And sure, he’s wearing a pinky ring. But it’s just a still photo of a single character. Let us all unclench, if only a little bit, and remember that we have a lot to be thankful for. To wit: That this movie will not be directed by Zack Snyder.