Teaser for Suffragette will make you want to riot in streets, hang out with Meryl Streep 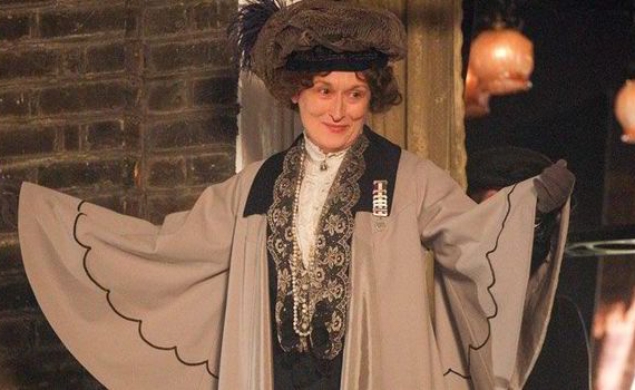 In Sarah Gavron’s upcoming awards-season contender Suffragette, Streep stars as Emmeline Pankhurst, the leader of The Women’s Social and Political Union and a political activist who was widely considered to be the head of the British suffragette movement in the early part of the 20th century. She also wasn’t the kind of woman you went against. Good character, meet good casting.

Gavron’s film, penned by Abi Morgan (Shame, The Iron Lady), tracks the early stages of the British movement to grant women the right to vote, a movement that was marked by tough times, harder choices, and a generous dash of violence. Pankhurst founded the WSPU in 1903, and it soon became known for its daring adherence to physical confrontations that could occasionally turn pretty violent—including a major spat of window-smashing, which is on display in the film’s first teaser trailer—as part of the organization’s dedication to “deeds, not words.”

As the fight wore on, the WSPU eventually adopted still more wild techniques, including hunger strikes, arson, and assaulting police officers. (The WSPU didn’t mess around, and neither did Pankhurst: When a schism developed within the WSPU and her own family, two of her own daughters left the group, a family divide that was never mended.)

The film also stars Carey Mulligan, Helena Bonham Carter (as Edith New, a suffragette who reportedly crafted infamous Suffragette Dolls, kitted out in prison uniforms), Anne-Marie Duff, and Romola Garai as burgeoning suffragettes who are not afraid to go crazy in service to their beliefs and desires. Here’s the first teaser for the film: