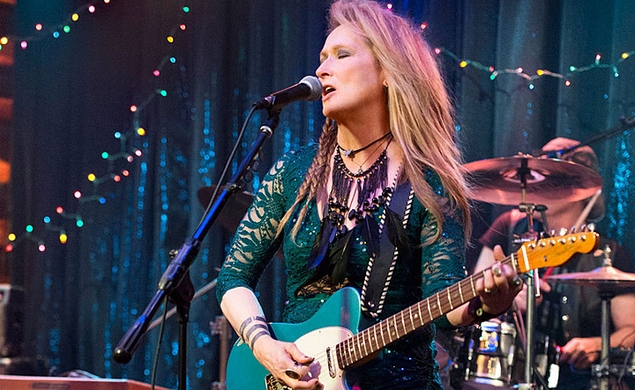 File this one under “Is there anything Meryl Streep can’t do?” Our best actress will next hit the big screen in Jonathan Demme’s Ricki And The Flash, which imagines Streep as a swaggering cover band singer who never quite made it, and who desperately needs to come to terms with that amid major family drama. Penned by Diablo Cody, the film is already exuding a punky vibe that Streep appears to have gotten really, really into. Like, bleeding-for-it into.

Over at Entertainment Weekly, Demme explains the depth of Streep’s desire to really embody the role (which saw her practicing her guitar skills for entire months), including that one time she played so hard that she drew blood. The director shares that her “six-string commitment got a little too real in the movie’s final scene.” Afterward, Demme recalls: “She goes, ‘Jonathan look! Blood!’ Meryl had shred so fiercely, a little blood had spattered on her baby blue dress.’” It’s unclear just which song Streep injured herself on, but it sounds as if she had plenty of options.

The outlet also shares that Streep sang a dozen songs for the feature, including Tom Petty’s “American Girl,” “Wooly Bully,” Bruce Springsteen’s “My Love Will Not Let You Down,” and even “Bad Romance” by Lady Gaga. Each song was recorded in front of a live audience, and Demme explains, “We didn’t use playback. We’re not sweetening it up on the soundtrack. It’s performance! …I have to say with our band—I shouldn’t say it—but I want to say what I feel in my heart—Ricki and the Flash blow away every original.”

The film’s family feel is also one rooted in veracity, as Streep’s own daughter, Mamie Gummer, stars alongside her as Ricki’s daughter. As Gummer explains it, it was an easy enough decision for the pair, “We’ve been careful and conscientious about how we engage in this silly business together…We didn’t talk much about it before stepping onto set the first day. Clearly, I trust she knows what she’s doing. She trusted me. We held hands, shut our eyes and jumped off.”

Ricki And The Flash opens Aug. 7.

We are ready to rock.