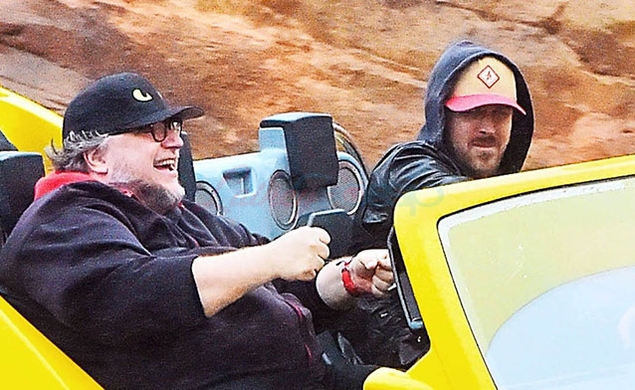 In our role as old-fashioned news hounds, chasing down the latest hot lead with shoe leather, elbow grease, a slick line of banter, a whole lot of moxie, and a secure wi-fi connection, we here at The Dissolve have been reporting on the unending lineup of live-action Disney films: Mulan, Pinocchio, Winnie-The-Pooh, Beauty And The Beast, and probably millions more. The latest movie to get the live-action treatment? Disney’s The Haunted Mansion. I know what you’re probably thinking: They already made a movie out of the Disney theme-park attraction Haunted Mansion in 2003, and it was a big old flop, despite starring noted box-office attraction Eddie Murphy. I know what else you’re probably thinking: You’d have to be screwy in the head to remake a movie that was a big old flop before.

You make some good points, old-timey-slang-talking theoretical person I just made up. What isn’t screwy in the head is hiring the beloved Guillermo del Toro, a man who truly deserves the made-up title of “frightmaster,” to direct this re-imagining of the theme-park attraction. Del Toro is a well-known lover of haunted-house tales, and is a popular choice to direct pretty much anything even vaguely spooky or genre-riffic.

Back in July of last year, we reported on a Reddit AMA where del Toro talked about how every studio turned down Hellboy 3 (cue tidal wave of fanboy tears) and briefly discussed a movie he seemed slightly less enthused about: a gritty reboot of The Haunted Mansion. Back then, he conceded that the project still had a ways to go. While he had met with Disney executives as recently as “two weeks ago,” he admitted that it was a “a hard script to crack,” and “that Disney will make this movie as soon as we crack the screenplay, but until then we cannot tackle it.”

Well, that loud cracking sound you just heard wasn’t the sound of some baseball player smacking a hum-dinger of a home run. It’s the sound of the Haunted Mansion screenplay being cracked wide open and an ocean of ooky-spooky goodness oozing out. Because The Wrap, which reports on show business and falafel sandwiches with equal skill, reports that handsome actor Ryan Gosling, the director of the new movie Lost River, is in talks to collaborate with del Toro on The Haunted Mansion.

According to the article, the two have struck up a close friendship as of late, rooted in mutual handsomeness. They were “photographed together at Disneyland over Oscar weekend, where they rode the Haunted Mansion ride in addition to Space Mountain, Thunder Mountain Railroad and the Pirates of the Caribbean attraction.” It is not yet known whether they enjoyed cotton candy or took photographs with a teenager in a Goofy costume.

The project has reportedly been in development for five years, with High Fidelity’s D.V. DeVincentis currently working on it now. (It is not yet know whether he did the cracking or whether the script had been cracked open before he began.) Generally, it is wise to be skeptical of movies based on theme-park attractions, because they tend to be terrible and pointless, like the original Haunted Mansion. But the pairing of del Toro and Gosling raises expectations. Former Mousketeer Gosling tends to work on fairly personal, passionate projects, and it’ll be neat to see what Del Toro will do with Disney’s money.